Films: What’s Love Got to Do with It?
Format: DVD from Lena Public Library through interlibrary loan on laptop. 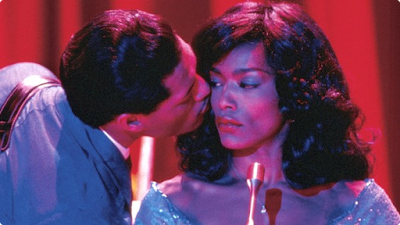 I’m not sure where to start with What’s Love Got to Do with It? except to say that I’m a fan of Tina Turner despite not really being a huge fan of her music. I like her attitude; I think she’s bad-ass and I don’t think I need to love her music to think that. I’ve been trying to get this movie from NetFlix for some time, but it’s always on a very long wait, so I finally broke down and ordered it from a library. I didn’t want to see this specifically because it’s more or less Tina Turner’s biography (although Turner herself claims it’s not really close to factual) but because it stars both Angela Bassett and Laurence Fishburne, and I really like both of them.

So, as I just said, this is essentially the biography of Tina Turner, but highly fictionalized. From what I understand, it covers the broad strokes without getting much right in the way of detail. I think I’m okay with that, although I often object to a complete rewrite of history, but it does present an interesting problem with the film. The fact that Ike Turner (Fishburne) was an abusive asshole and Tina (Bassett) had to fight for her right to perform independently and keep her own name is pretty well known. Because of that, it’s the details that are of interest here, and evidently the details aren’t close to the reality.

Of course, Tina Turner didn’t start as Tina Turner. She started as Anna Mae Bullock from Nutbush, TN, abandoned by her mother at a young age. Eventually, Anna Mae heads to St. Louis to be with her mother and sister. Once there, she is discovered by Ike Turner, and soon becomes the singer for his band. Because of her talent, and with her change of name Ike, Tina, and their band are soon rising in the charts.

And then, of course, things get dark. With a great deal of the attention on the band being paid specifically to Tina, Ike can’t contain his jealousy. This results in both drug use and violence, and eventually Tina discovers Buddhism as a way to deal with the chaos of her life. It’s worth noting that the friend who leads Tina to Buddhism, Jackie (Vanessa Bell Calloway) evidently doesn’t actually exist, but is more of an amalgam of multiple people in Turner’s life. And, of course, eventually Tina gets the legal right to perform as a solo artist under her own stage name, and, well, become Tina Turner.

One of the main joys of What’s Love Got to Do with It? is the music. I said above that I’m not a huge fan of Tina Turner’s music, although I can appreciate it. While the style isn’t what I normally would listen to, I can’t deny that as a performer, she holds nothing back. The movie is greatly aided by the fact that all of the singing is performed by Tina Turner. It almost had to be; no one else could really sing Tina’s songs like her.

So let’s talk performances. I said before that I like both Angela Bassett and Laurence Fishburne, and both of them are great here. Angela Bassett is great casting for Tina Turner. She has the gravitas on the screen to match the way Turner comports herself on stage. There’s something magnetic about her; she commands the screen and the stage, and that is exactly what is needed for the role. As for Fishburne, he manages to do something difficult here. He gives an incredibly noteworthy performance, one that ranks with the best of his career, and does so while playing a character so loathsome that it becomes hard to watch him.

But, as I said above, it’s not a perfect film by any stretch, and the problems come from the screenplay. The main parts of Ike and Tina Turner’s troubled relationship is hardly unknown. I think pretty much everybody knows that Ike Turner was a drug-addled wife beater. The fact that Tina managed to split from him and maintain her name, integrity, and career is also pretty widely known. When we know where we are going in a film, it’s the screenplay that needs to be compelling enough to make a story with a known ending interesting. Movies like Apollo 13 do that. It’s the details that make it work. Sure, I knew the astronauts were going to get home; I didn’t know how. With What’s Love Got to Do with It? I knew Ike would be a shit and that Tina would rise above it all. It’s the details I want to see, and it’s the details that aren’t based in reality here.

I would love to hear Angela Bassett sing, though. I’m sure she can’t necessarily belt it like Tina Turner can (who could?), but I’m betting she could bring it pretty hard. She seems pretty much capable of everything else.

Why to watch What’s Love Got to Do with It?: Tina Turner is bad-ass.
Why not to watch: Domestic violence.

Email ThisBlogThis!Share to TwitterShare to FacebookShare to Pinterest
Labels: Best Actor, Best Actress, Brian Gibson, drama, musical, What’s Love Got to Do with It?