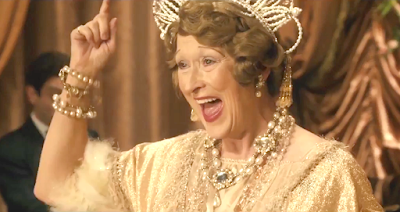 I’m going to say something unpopular here: The Academy needs to end its love affair with Meryl Streep. Don’t get me wrong here. Meryl Streep is easily one of the greatest actors to every stand in front of a camera and likely the greatest living actor (especially now that Daniel Day-Lewis is retiring, and honestly, maybe even if he stayed in acting). But seriously, it seems like we can’t have an Oscar ceremony without Meryl getting nominated for whatever movie she did last. This seems absolutely the case with Florence Foster Jenkins.

Some time ago, I came across the acronym “BOSUD” to describe one of the title characters of Melvin and Howard. The acronym stands for “biography of someone undeserving.” Our title character here seems to be similar in that respect. Essentially, Florence (Streep) is an eccentric (‘cause she’s super wealthy) woman in New York during World War II who is deeply involved in the music scene, especially with opera and the symphony.

Her personal life is as eccentric as she is. Suffering from the long-term effects of syphilis contracted from her first husband, Florence is completely chaste in her marriage to St. Clair Bayfield (Hugh Grant). He isn’t chaste, though, maintaining a separate residence from his wife with his secret mistress Kathleen (Rebecca Ferguson). One day, Florence gets a whim to restart her singing lessons. She uses her vast fortune to hire a pianist Cosme McMoon (Simon Helberg) and brings in Carlo Edwards (David Haig), assistant conductor of the Metropolitan Opera, to be her vocal coach.

And here’s the upshot: she can’t sing. I mean she really can’t sing. Florence Foster Jenkins can’t carry a tune if it came with a handle. However, because of her money and influence in the music world, everyone tells her that she is wonderful. She holds a few concerts, much to the shame of Cosme, who believes his reputation (such as it is) will be ruined. And, eventually, she books Carnegie Hall for herself.

There was a real Florence Foster Jenkins, who really fashioned herself a singer and really couldn’t sing a note, but did book Carnegie Hall for herself and sang to a sold-out crowd because she was more or less the William Hung of her day.

Here’s the thing, though: if anyone should have been nominated for an Oscar for Florence Foster Jenkins, that person was Hugh Grant. Grant is the beating heart of this film, someone who, despite his constant infidelity to his actual marriage, is strangely faithful to Florence in the only thing that matters to her: her music. He’s the one who makes sure that she gets the acclaim that she desperately wants. He’s the one who arranges for her reviews to be glowing when printed in the local papers. He’s the one who conspires to make sure that she never sees a bad review of herself.

As for Meryl Streep, it seemed to me that a great deal of what she was doing, at least when she was singing, was reprising her role as Julia Child from Julie and Julia. Streep is rarely less than at least watchable, of course, and there’s nothing particularly problematic with her performance as the title character here, aside from it feeling like we’ve been here before. But it’s also a performance that, had it be done literally note for note (pun intended) the same by another actors, say Glenn Close, it wouldn’t have sniffed a nomination. It feels completely as if Meryl Streep was nominated for being Meryl Streep in a role and not because the performance itself deserved it.

There’s also some weird subtext here that it’s difficult for me to parse. A few years ago, when finishing up all of the movies at that time that had won Best Picture, I finally got to 1938’s winner, You Can’t Take It with You. One of my main objections ot that film was the way many of the characters treated the particular manias of other characters. One character in particular decided that she was destined for the ballet and danced all the time despite having no talent. Everyone else in the family simply encouraged her to follow that dream. Sure, it made her happy, but I think that sort of thing is ultimately destructive. It would be like telling me that I should pursue, at nearly half a century in age, my dream of becoming an Olympic luge medalist. It simply ain’t gonna happen.

And yet, because of her wealth, it does happen for Florence. She’s infantilized by all of this, kept in a bubble because of her wealth and influence. The emperor has no clothes here, and everyone knows it, but no one is allowed to tell the emperor. It’s a paean to wealthy excess and privilege. More to the point, Florence Foster Jenkins’s singing “career” is a monument to participation trophies. Sadly, so too is Meryl Streep’s Oscar nomination.

Sure, there’s something like heart in this film, but most of it belongs to Hugh Grant. As a movie, Florence Foster Jenkins, like its lead character, hits a lot of wrong notes and comes off pretty flat.

Why to watch Florence Foster Jenkins: Hugh Grant isn’t often better than he is here.
Why not to watch: Because not everyone deserves a trophy.