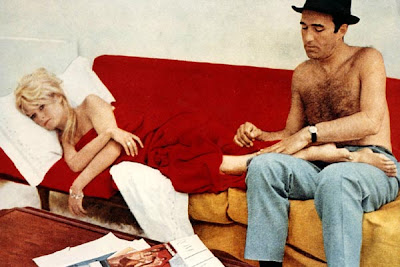 Jean-Luc Godard is a director that I’m starting to come to terms with as a viewer. At least I thought that was the case until Le Mepris (Contempt) came across my desk. I’m not 100% sure how to react to this film.

But let’s start at the start here, because we start with Brigitte Bardot’s naked hinder. Brigitte hasn’t aged particularly well, but in 1963, her behind was a thing of beauty and the camera spends a lot of time inching forward and back over it. Her name, we discover, is Camille and she is married to a playwright named Paul Javal (Michel Piccoli).

While Paul is a playwright, he’s been dabbling a bit in films. He’s been contacted by an American film producer named Jeremy Prokosch (an unmistakably scenery-chewing Jack Palance) to work on the script for a film based on Homer’s Odyssey. Prokosch has brought in Fritz Lang (playing himself) to direct this vision, but he’s not happy with the film he’s getting. To put the conflict of producer and director into stark contrast, Lang is creating an art film and Prokosch wants as much nudity as possible.

Prokosch is everything you expect a smarmy film producer to be. While he certainly wants his film to make money (and contain buckets and buckets of nudity), he’s far more interested in making time with Camille, inviting her to ride with him back to his villa while her husband follows along in a cab. And this is where something happens that we don’t get to see.

Something, in the half hour it takes Paul to arrive at Prokosch’s villa, happens between Camille and Prokosch, but we never discover what it is. My thinking is that he attempted to force himself on her, which is exactly the persona that he’s shown us so far and exactly what we expect of him. I think he’s unsuccessful in this, although I have no proof of it. Honestly, I don’t have any proof that Prokosch tried to introduce Camille to Little Jeremy; it just makes sense that that’s what happened.

Whatever happened during this time causes a huge rift in the relationship between Camille and Paul, probably because it was at Paul’s insistence that Camille go off in Prokosch’s car. What she learns from this is that essentially Paul is weak. Prokosch’s intentions with Camille were evident to anyone who still had a pulse, and Paul—knowing this—sends her off with the man anyway because he wants the money to rewrite The Odyssey script. He’s weak. He’ll sell her out even if the reason is to make enough money to make her happy. And this is where we get the name of the film.

The key scene comes in the middle of the film after Paul and Camille return to their apartment. They proceed to discuss whether or not they will head to Capri with Prokosch and whether or not Paul will rewrite scenes in Lang’s film to include more T & A. This argument rambles on and covers several dozen topics, takes place in every room in their apartment, includes both of them taking baths, and lasts for a good half hour. I was dreading this scene a bit, but as it turns out, the scene is really pretty watchable.

As it turns out, they do go to Capri, and everything spins further out of control until we get the ending that comes completely out of nowhere…at least until you put a little thought into it. I’m not going to go into this here or put it under a spoiler.

Le Mepris is beautifully shot throughout in startling colors and with truly marvelous scenery. Brigitte Bardot, when not showing the full-on full moon of her backside is frequently draped in solid primary colors which work very well for her. In short, this is a gorgeous film to look at. There’s something about the film quality here that makes the film look European. It looks in many ways like a Fellini film, or at least it doesn’t look like an American film of the same era. I can’t truly describe that film quality because I don’t have the vocabulary for it.

It’s also a pleasure to see Fritz Lang playing himself. First of all, the dude is rocking a monocle, and that makes me love him more than I did going in. Second, it’s Fritz freakin’ Lang, one of the greatest directors to ever stand behind a camera. I really love it when directors show up in films, especially when they are directors I like.

For all this, Le Mepris is a film that leaves me torn. I want to like it more than I do, in part because it is so pretty to look at and in part because it does feature a lot of dialogue with Fritz Lang (who admits that M is his personal favorites of his films). There’s a part of me that really appreciates the meta-nature of this film as well. We see many of the aspects of filmmaking as the movie goes on: we watch rushes, see shots being made, look at casting decisions, and more. It is, essentially, a film about making a film, which means that Godard is commenting not only on the subject of Paul’s and Camille’s marriage, but also on the filming process itself, much like Bergman did with Persona.

And yet, there’s another part of me that finds all of this simply too much for a Monday night. Le Mepris feels like a film that requires multiple viewings to truly understand, and I can’t say that I liked it enough (aside from seeing Fritz Lang en-monocled and the loving shots of Brigitte Bardot’s hinder) to watch it again in the near future.

Why to watch Le Mepris: A truly beautiful film.
Why not to watch: A WTF ending to end all WTF endings.
Posted by SJHoneywell at 11:50 PM