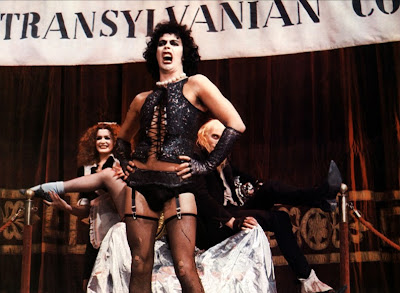 I suppose that until tonight, I was the only person of my generation to have never seen The Rocky Horror Picture Show. Up to this point in my life, I’ve managed to avoid this film through design and by carefully avoiding it whenever possible. I knew the basics going in and I knew that in the theater, people scream, holler, spray water on each other, throw rice, and otherwise mess up the theater. I had no interest. I don’t like crowds and I don’t want to have strangers throw things at me. The best piece of writing I’ve ever seen on the film is in Kevin Murphy’s book, “A Year at the Movies,” which I will certainly reference again by the end of this.

Tonight, when scrolling through the NetFlix queue, my wife scrolled across this one. She’s been on me to watch it with her since about the time we got NetFlix a year ago. It was time to bite the bullet and put this one behind me.

So now I’ve seen the damn thing, and I realize now that I was right to avoid it my entire life. I understand the reason the film is a must-see, but I don’t have to be happy about it.

Let’s be blunt here—this is less a movie than it is an excuse to string a bunch of unrelated songs together, get Tim Curry to wear stockings and garters, and celebrate things like transvestitism and rampant sexuality of all types in ways that would shock the establishment in 1975. I don’t have a real issue with shocking the establishment, honestly. I’d just rather it didn’t have to happen with songs I don’t like, excessive camp, and things that annoy me.

There is a sort of a plot involving a newly engaged couple named Brad (Barry Bostwick) and Janet (Susan Sarandon), who get a flat tire in the proximity of a large castle. Here they are met by a hunchback named Riff Raff (Richard O’Brien), a couple of servants named Magenta (Patricia Quinn) and Columbia (Nell Campbell), and a transvestite scientist named Frank-N-Furter (Tim Curry). Frank is trying to create a man for sex purposes, and succeeds in building Rocky Horror (Peter Hinwood). There’s also a rival scientist (Jonathan Adams) and a delivery boy missing part of his brain (Meat Loaf), cannibalism, aliens, and a lot of implied sex in various configurations. That, and a lot of songs. Really, that’s enough of trying to make sense of the plot. There’s also a narrator of sorts (Charles Gray).

I genuinely attempt to give every movie I watch a fair shake. This time, I’m not sure that was possible. If you’re a Rocky Horror Picture Show fan, I’m sorry. I really hated this movie. A lot. I can’t recommend it from a schlock perspective, from a musical perspective, from a film perspective, or any other.

I go back to Kevin Murphy’s essay in which he comments that the general reaction of the crowd watching this film is entirely wrong. Brad gets called an asshole every time he says his name, but he’s the only person on the screen who isn’t an asshole. People participating in the live show must conform to the script, which seems to be at odds with the original intent of the show and the stage show that spawned it. Ultimately, the story is pretty stupid and doesn’t make a lot of sense.

And it’s a damn shame that Tim Curry hasn’t seemed to get past this film. Susan Sarandon has, as has Barry Bostwick. But evidently the dress and the garter belts have kept Curry in a series of crappy roles for most of his career. Such a shame, since the guy is really a lot more talented than a lot of his roles.

I realize, though, that my opinion on this film is not necessarily the popular one. Frankie fans tend to be rabid. My lovely wife is one such Frankie fan. It’s only fair to give her the opportunity to say why she loves this film, since evidently I don’t get it. I promise not to edit her. I’m giving her a free chance to defend this film.

“I think it’s stupidly entertaining. It has no other value except for that. I think the songs are catchy; I like singing along to them. And every time I watch it, I am not disappointed that I have seen it again.” So there’s that.

Go ahead and beat me up for it, folks. I stand by the fact that while it may be camp and “so bad it’s good,” at its heart The Rocky Horror Picture Show is a bad movie.

Why to watch The Rocky Horror Picture Show: A piece of filmic, schlock, and camp history.
Why not to watch: Because it really isn’t very good.
Posted by SJHoneywell at 11:14 PM