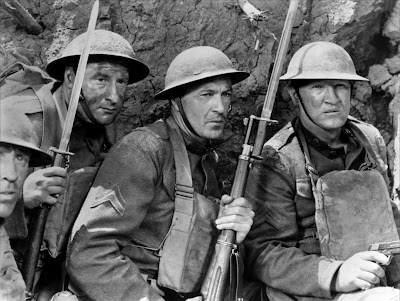 Films like Sergeant York have the power to turn me into a conspiracy theorist. Released in 1941 before America entered World War II, this film feels very much like a pure propaganda piece created so the folks back home would support the troops in the war. It’s almost as if Roosevelt, knowing that war was coming, tapped Howard Hawks on the shoulder and commanded him to make a film that glamorized one of America’s greatest war heroes, leaving in just enough dirt to make it real, then pouring on the schmaltz to give the audience war(m) fuzzies.

The film is a mostly-warts-removed biopic of Alvin York (Gary Cooper). We start with the warts. York is a hellraiser in his backwoods area of Tennessee, drinking every night and disturbing church services with his carrying on. We learn that he and his family are dirt-poor and are farming a patch of top land, which is not nearly as productive as the rich and fertile bottomland. Alvin runs afoul of the local preacher, Rosier Pile (the always great and identifiable-by-voice Walter Brennan), who cautions Alvin that the Devil is working through him.

Things begin to change when Alvin encounters Gracie Williams (Joan Leslie), who has blossomed into quite the beautiful young woman. He faces neighbor and local rich guy (relatively speaking) Zeb Andrews (Robert Porterfield) for the girl’s affections. While she shies away because of his reputation, Alvin has convinced himself that the real problem is that the doesn’t have a piece of that bottomland. He mortgages everything to acquire it, pledging to come up with $70 in 60 days to pay the balance, and works like a dog to get the money. He comes up short, and the land dealer sells it to rival Zeb.

And this is where the movie takes its first turn into schmaltz and propaganda. York, drunk off his ass, decides to go hunting for the men who did him a bad turn, specifically Mr. Tompkins the land dealer (Erville Alderson) when he is struck from his horse by a bolt of lightning. Awakening, Alvin wanders into a nearby church and gets himself some old-time religion thanks to the ministrations of Pastor Pile. Once properly a part of the church both in body and spirit, Alvin goes out to ask forgiveness of Tompkins and Zeb Andrews, and both men repay him with similar kindness. The romance between Alvin and Gracie blooms, and the two plan to get married and sharecrop the land Zeb bought until he can buy it for himself.

And then the war comes. Alvin, thanks to his new beliefs, attempts to register as a conscientious objector, but is rejected and drafted. In boot camp, it is discovered that York is not only a proper soldier, but also one hell of a shot. In fact, he’s so good that he gets promoted to Corporal and is asked to instruct other men in target shooting. The problem is that his religious beliefs still won’t let him abide by killing other men, even if they are enemies of his country.

Fortunately for him, he has probably the most understanding base commander in history, who lends him a book on American history and gives him a 10-day leave to go home and think it over. He tells York that if he comes back and truly can’t bring himself to fight, he’ll be recommended for an exemption. Naturally, though, York contemplates history and the Bible, and decides to render unto Caesar that which is Caesar’s, and go fight in Europe.

Now, it would be easy for me to gloss over the military part of this story as simply more propaganda and schmaltz, but I really can’t. It’s documented. In the Meuse-Argonne offensive, Alvin York captured 32 machine guns, 132 German prisoners, and killed 28 German soldiers on his own, feats for which he was awarded the Medal of Honor. I’m not going to poke at this, because it’s proof that the real life Alvin York had gigantic metal balls.

The good news for all of this is that it seems to honestly follow the general path of Alvin York’s actual life. He was by all accounts a drinker and a hellion, and did get religion and head onto the straight and narrow path in a denomination that foreswore violence. And he did go kick serious ass in Europe and walk away not only with the highest military honor of this country, but also with the French Croix de Guerre and medals from Italy and Montenegro. Dude was badass.

And yet there is a part of me that can’t get past the fact that this really feels like the story has been run through a Hollywood cleansing machine to make it that much more inspiring. It seems like the story doesn’t need that much in terms of inspiration, but with patriotic music swelling in the background and down-home wisdom coming from the backwoods hero, it has a very distinct sense of nationalistic manipulation. And it certainly doesn’t hurt that the bad guys here are German.

I don’t really believe the conspiracy idea here. It was probably common knowledge that we were heading toward war throughout 1941, so it’s no surprise that this sort of film would start being standard fare at local movie houses.

And yet, films like this don’t translate well to the modern era. Most filmgoers have seen far too many modern war movies to buy into the tale being told here and accept it as truthfully told. There are seams evident on the patchwork done to Alvin York’s life that diminish the film somewhat. The characters, York included, are too much out of central casting for this to really be an unvarnished tale. It’s kind of a shame, because capturing 132 prisoners shouldn’t need much in the way of varnish.

Why to watch Sergeant York: Eleven Academy Award nominations.
Why not to watch: It’s filled with patriotic syrup.
Posted by SJHoneywell at 11:21 PM