Birth of a Communist 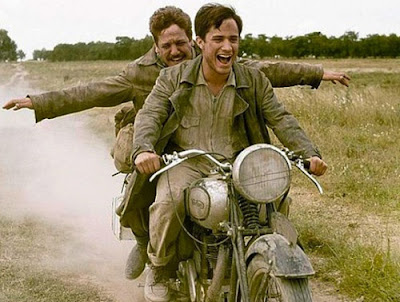 When I did the 1001 Movies list originally, I made a massive effort to remove foreign language films at a regular clip. I haven’t really done that with the Oscar lists. A big part of that is that there aren’t a substantial number of non-English films on my Oscar lists. Because of this, I find myself nearing the end of this part of this project with a relatively substantial number of foreign language films still to see. I should probably do something about that, which is one of the reasons I watched The Motorcycle Diaries (or Diarios de Motocicleta if you prefer) today.

Depending on your political persuasion, The Motorcycle Diaries is either a terrible tale of the creation of one of the greatest enemies of freedom to ever exist or it’s a superhero origin story. Why? Because this is the story of Ernesto “Che” Guevara (Gael Garcia Bernal) and a formative journey he took with an older friend named Alberto Granado (Rodrigo De la Serna) from Buenos Aires up along the Pacific coast of South America on an old, dilapidated motorcycle (hence the name of the film).

And, as often seems to be the case, that’s pretty much a complete summary of the plot here as well. Ernesto, who is called “Fuser” through the whole movie and Alberto hop on Alberto’s ancient, oil-leaking motorcycle and head up to Chile, Peru, Colombia, and eventually Venezuela. It’s worth noting that Alberto is approaching his 30th birthday and Ernesto is younger, and close to finishing his medical degree. A big part of their quest to get to Peru is to reach a leper colony; Ernesto’s medical discipline of choice is dealing with leprosy.

And…that’s literally it. Both of them have come from a privileged background and feel (for lack of a better way to put it) entitled to have this journey to explore their continent. Alberto specifically is looking to have as much sex as possible along the way. But as they travel, frequently without money and often without food, they begin to see the world through the eyes of the oppressed people they come across. They meet poor farmers who have been pushed off their land by wealthy landowners, for instance. And as they continue, their view of the world is altered into something much more radical.

It’s also worth noting that the name “The Motorcycle Diaries” is kind of unfair or at least a big misleading. Their motorcycle dies pretty quickly, and they spend much more than half the movie essentially walking through Chile and Peru. The political change seems to happen more, more quickly, and more severely to Ernesto, In fact, it’s not really clear that Alberto has changed in his outlook at all until they two are preparing to leave the leper colony. He’s very much a creature of comfort throughout the film, willing to lie for a meal if it comes to that.

The most impressive part of the film is the scenery. I will admit that I live in a state that is more or less flat, so mountains will always get noticed. Seeing terrain with snow-capped mountains in the background is something that will tend to rivet me to the point where I might well forget to read a subtitle or two. It’s what you get when you grow up and live in a place where a 40-foot-high hill in my old home town was tall enough to be named. No, I’m not kidding.

Our twin performances from Bernal and De la Serna are fine, but nothing exceptional. And really, that’s kind of my opinion of the film in general. It’s fine. There’s nothing here that’s even mildly controversial, in fact—and that might be the most controversial thing about the film. Guevara was (and in many ways still is) a polarizing figure. To have him depicted as a somewhat romantic, selfless and suddenly “woke” young man is either confirming or anathema, depending on one’s political outlook.

But really I’m a little disappointed with just how average it all is outside of the scenery around the Andes. It’s two guys on a motorcycle or walking, encountering people in other parts of the world, and then hanging around with lepers. With the exception of that section at the end in the leper colony, there’s not a lot going on there that wouldn’t be different from a camera following a couple of guys backpacking from country to country in Europe.

Because of that, it’s not a film I feel the need to ever see again. There’s an attempt at the end to give us some sort of grand design and uplift here, but it’s too little, too late. This is pleasant enough, but not worth a second viewing.

Why to watch The Motorcycle Diaries: If nothing else, the landscape is gorgeous.
Why not to watch: I’m not sure I buy the hero building.