Film: All This, and Heaven Too
Format: Turner Classic Movies on big ol’ television. 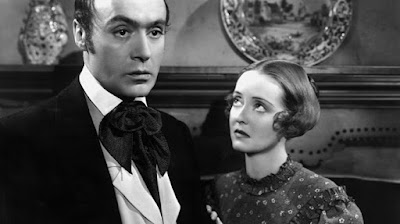 When I first started reviewing films seriously here (at least as seriously as I’ve reviewed any films on this site), I was non-committal about Bette Davis. I didn’t understand what all the fuss was about. All This, and Heaven Too is my 15th Bette Davis movie, and by now, I’ve gotten it. Davis was a force of nature on the screen. Something of a beauty in her earlier films, Davis, by the time her career truly kicked into high gear, could not be called a classic Hollywood beauty by any real standard. No, Davis’s appeal was how forceful and dynamic she could be on the screen. All This, and Heaven Too falls in that strange middle place in her career, after her temptress roles (as in Jezebel) and before her less glamorous but meatier roles (like in Now, Voyager). What this means is that Davis is playing a romantic character while not having the traditional looks that might be expected.

Mlle. Henriette Deluzy-Desportes (Davis) has just come to America where she is employed at a girls’ school as a French teacher. Sadly for her, scandal has followed her, and the girls in her class are relentless and scandalized by her presence. Convinced to stick it out by young pastor Henry Martyn Field (Jeffrey Lynn), who she met on her crossing from Europe, she goes back to her classroom to tell the story of her life to her students in the hopes that they might better understand and perhaps accept her.

So, we set the Way-Back machine for a few years earlier and Henriette being hired as the governess for the Duc (Charles Boyer) and Duchesse de Praslin (Barbara O’Neil, who was nominated in a supporting role). Henriette’s job will be to monitor the education of the four children; Isabelle (June Lockhart), Louise (Virginia Weidler), Berthe (Ann Todd), and Reynald (Richard Nichols). There are almost immediate sparks between our young governess and the Duc, and just as quickly the Duchesse de Praslin decides that Henriette exists only to make her own life terrible.

So, from that beginning, here are the things you need to know as the film moves forward. Henriette quickly becomes a favorite of the children, especially little Reynald, the only boy. This is especially galling for the Duchesse, who is often cold and inexplicably distant and cruel to her children. You should also know that the marriage between the Duc and Duchesse is entirely loveless and exists only on spite. It’s also worth noting that it becomes clear that the Duchesse is intensely paranoid. While she isn’t wrong that her husband and Henriette have feelings for each other (requited, but entirely unfulfilled), her significant mental illness causes her to see every action by Henriette as specifically against her and as an effort to destroy her marriage. It’s also soon clear that her relationship with her husband is of the love/hate variety. She is obsessed with him and hates and loves him in equal measure. She is constantly suspicious of him and desperate for him, and it is this that has forced him away from her.

Eventually, there is scandal. Then there’s a lot more scandal. I won’t go into detail, because the first scandal you can easily figure out on your own, and the second scandal is essentially the entire third act of the film.

The biggest drawback of All This, and Heaven Too is the length. The movie runs more than 140 minutes, and there is absolutely no reason it needs to. The romance, as mentioned, is requited but never really acted upon. This means that we’re going to get multiple scenes of Henriette and l’Duc mooning about each other when we really only needed one or two. There’s a little bit of plot spread thinly over a hell of a lot of screen time.

This is a problem. The second act of this film is absolutely eternal. At one point, figuring that I didn’t have a lot of the movie left to go, I paused it and discovered I hadn’t quite completed the first hour and still had a good 85 minutes or so. Since the final act runs maybe 25 minutes, this meant essentially another hour of setting up the ending, slowing inching toward making sure everyone in France knows that Duc de Praslin has been seen in public with the governess of his children while his wife is elsewhere. And then we need to hear about that for 20 minutes.

And that’s the issue. The story of All This, and Heaven Too is melodramatic by design, but Davis is good enough on the screen that she keeps the melodrama to a minimum. The same cannot be said of Charles Boyer, who seems to revel in it. Barbara O’Neil is vicious and insane, and wonderful because of it, but she’s about as melodramatic as Boyer.

So, while there’s the guts of an interesting story here, it’s too long for the plot and too melodramatic to remain interesting. And while Davis is rarely not worth watching, there are plenty of better Bette Davis films and performances with which to spend your time.

Why to watch All This, and Heaven Too: Bette Davis is always worth your time.
Why not to watch: It’s too long and too drippy.

Email ThisBlogThis!Share to TwitterShare to FacebookShare to Pinterest
Labels: All This and Heaven Too, Anatole Litvak, Best Picture, drama, romance