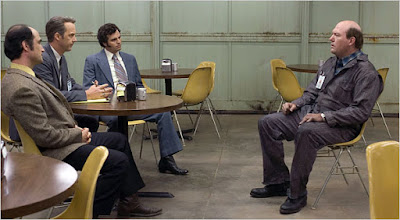 It seems strange when looking at a list of horror films to be watching a film that is essentially a straight crime drama. Zodiac is based on the actual case of the Zodiac killer in the late 1960s and early 1970s. I’ve said before in regard to the They Shoot Zombies list that when you get down toward the bottom of the list, you get three things—underknown horror movies, horror movies that aren’t really that good, and movies that aren’t really horror. That’s clearly the case with Zodiac. There are horror elements here, but this is a crime drama more than it is anything else.

Zodiac is also a film that makes a turn in terms of genre at some point, and I’m not exactly clear where that happens. The opening part of the film is very much a serial killer movie. In fact, the film opens with an attack on a couple (the guy survives), and another follows not too long behind. There’s a vague feeling of a film like The Silence of the Lambs in this part as we deal with the murders and slowly start to get a feel for both the police investigation and the pursuit of the story by the San Francisco Chronicle. As the film continues and the mocking letters from the killer to the press change and slow down, it becomes much more about the investigation.

The murders begin and the letters from the killer, calling himself Zodiac begin. Those interested at the San Francisco Chronicle include reporter Paul Avery (Robert Downey Jr.). Also interested is the paper’s cartoonist, Robert Graysmith (Jake Gyllenhaal), who is particularly interested in the coded message received from the killer. Since the killings cross jurisdictions, we’re also introduced to a variety of police who are working the case. Primarily, these are Inspector William Armstrong (Anthony Edwards) and Inspector David Toschi (Mark Ruffalo), as well as Sergeant Jack Mulanax (Elias Koteas). The various police departments work grudgingly with each other, since each wants to be the one to catch the Zodiac.

Along the way, the Zodiac continues to communicate, contacting lawyer Melvin Belli (Brian Cox). Various people admit to being the killer, and much of the communication coming from the Zodiac seems to claim crimes that he didn’t commit. Eventually, the investigation focuses on a few potential suspects, the prime one being Arthur Leigh Allen (John Carroll Lynch), who is ruled out on some technicalities, especially by handwriting expert Sherwood Morrill (Philip Baker Hall). As the letters stop and the investigation stalls, the different personalities involved in the investigation have their lives slowly fall apart. Paul Avery gets lost in drugs and alcohol and eventually moves on to work at the Sacramento Bee. Inspector Armstrong transfers out, and Inspector Toschi is eventually moved off homicide after being accused of forging Zodiac letters.

It is Robert Graysmith whose life is changed the most. Obsessed with the Zodiac case, he begins his own investigation with the hopes of writing a book and eventually finding the killer. It causes undue strain on his marriage to Melanie (Chloe Sevigny), especially when he enlists their children into helping his investigation. And (minor spoiler alert), the killer is ultimately never found. The Zodiac case is still considered open. Sorry if you didn’t know that, but it’s been more than 40 years, so you only have yourself to blame.

One of the things I find interesting about movies made by acclaimed directors is that they often make or agree to interesting casting choices. That’s certainly the case with smaller roles here. Clea DuVall pops up as a potential Zodiac witness, for instance, and Adam Goldberg gets about a minute of screentime as Paul Avery’s replacement at the Chronicle. Far more interesting to me is seeing comic actors like John Ennis and Charles Fleischer show up; Fleischer is particularly weird and disturbing in his small role.

I do have reservations with Zodiac, though. There’s an issue with the lack of closure, naturally. That can’t be helped, and creating an ending would be wrong and disrespectful, so while it is a problem in terms of the story, it’s not a problem that can be helped. No, the far bigger problem is the length. Zodiac runs something like 158 minutes, with the last 90 minutes taken up entirely by the investigation and the personalities involved in it. Sure, it’s a big story, but this could have been told in about two hours without a great deal of loss.

And really, that’s my biggest issue here. I don’t have a problem with longer films, but Zodiac feels a great deal longer than it is. There’s plenty of story here, but not enough story to fill this much time.

Why to watch Zodiac: Real-life crime drama.
Why not to watch: No closure.

Posted by SJHoneywell at 3:18 PM