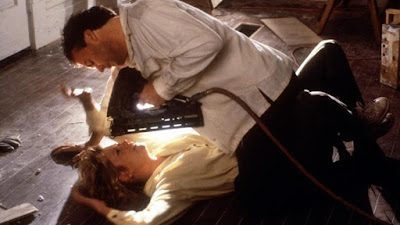 I’ve never been a believer in the talents of Melanie Griffith. I’m not sure what it is. There’s something about her that simply doesn’t work for me. Most of the time, when I see her, I wonder why the film producers didn’t get someone else. Melanie Griffith seems like the poor man’s Meg Ryan, like the actress you get when you can’t really get the actress you want. Honestly, I think that’s an unfair assessment of her; the truth is that I just don’t care for her that much. This fact has kept me from getting to Pacific Heights for some time—this being the final movie on the original Bravo list of 100 Scariest Movie Moments for me to watch. Completing a list certainly seems like it’s worth a little Melanie Griffith.

Like many a good thriller, the set up here is pretty simple. A young, unmarried couple named Patty Palmer (Griffith) and Drake Goodman (Matthew Modine) decide to purchase an old fixer-upper in San Francisco for more than they can really afford. The idea is that they will live on the top floor of the house and rent out the bottom floor as a pair of apartments. This starts out as a “white people issues” movie—they’re charging a combined $2300 rent for their two apartments, and this doesn’t come close to covering their actual mortgage, which, with the apartments filled, is just slightly less than the combined rents of their original apartments.

Apartment one, the one-bedroom, is rented quickly to the Watanabes (Mako and Nobu McCarthy). The studio apartment is a slightly different matter. While one potential renter is interested, his application is lost through a mix-up and Drake rents the studio to a man named Carter Hayes (Michael Keaton). From the get-go, Carter Hayes is the definition of sketchy. Rather than a security deposit, he offers six months’ rent in advance via wire transfer, and offers personal references rather than a credit check. Of course the money never shows up, he takes possession of the apartment before having a lease, and because of the laws for tenants in California, he seems to have all of the rights on his side. When he keeps everyone up with hammering late at night, Drake shuts off his electricity and heat, and this action is essentially illegal and gives Carter a legal right to sue.

Carter gets more and more aggressive, changing the locks on his door, and eventually releasing hordes of cockroaches into the house. The Watanabes move out, putting enormous financial pressure on Drake and Patty. In fact, the stress gets so bad that Patty suffers a miscarriage and Drake, frustrated, attacks Carter. This gets him arrested and a restraining order keeps him away from his own house. Eventually, the legal process catches up to the reality that the couple is living in, and their lawyer (Laurie Metcalf) gets Carter evicted. When they get back into the apartment, they find it gutted—everything removed, the floors ripped up, and even the toilet missing.

This is when Patty goes into action, tracking down the elusive Carter Hayes only to discover that he is not who he claimed to be. In fact, this sort of rental scam has been his “occupation” for some time, more or less becoming a nuisance tenant until his landlords become so frustrated that they attack him in some way, allowing him to take over ownership of the building in question. Patty decides that she’s not going to let him get away with this, but no one pulls this kind of scam successfully over and over without having a lot of backup plans along the way, right?

The best part of Pacific Heights is the set-up. The story is absolutely the strongest element here, because it so clearly works in ways that seem counterintuitive to the audience. Carter Hayes is clearly the bad guy and clearly insane, and yet over and over again, he finds himself on the right side of the law. There is a palpable level of frustration here that really makes the film work. Additionally, Michael Keaton is brilliantly cast. It’s easy to think of Keaton in this part of his career as being the sort of Mr. Mom-esque guy who was good in light comedy and perhaps could pull off a little action (although in my opinion he was always better as Bruce Wayne than he was as Batman). But he’s capable of real menace, and that’s on display here.

And that’s where I kind of draw the line. I said above that I’m not a huge fan of Melanie Griffith, and here she’s mildly serviceable, and better in the second half of the film. I just have trouble taking her seriously. No, it’s Matthew Modine who is the bigger issue for me here. I like Modine well enough at times, but he seems woefully miscast in this. I don’t buy his sudden shifts into blind rage or physical attacks on Michael Keaton that seem to come out of nowhere. I’ve known some hotheaded people and have dealt with my own temper in the past, and I’ve rarely seen someone go full homicidal this quickly and this unconvincingly. Modine can play evil (the first season of Stranger Things taught us that if nothing else did), but I just don’t buy him as violent.

And so that’s where we’re left with Pacific Heights. We have a movie with a great premise created by an acclaimed director with one-third of a good cast, or at least one-third of an appropriate cast. Small roles from people like Tippi Hedren, Dorian Harewood, and Dan Hedaya can’t change the fact that I simply don’t buy two-thirds of the leads.

Why to watch Pacific Heights: Before his current resurgence, Michael Keaton played some interesting roles.
Why not to watch: Neither Matthew Modine nor Melanie Griffith seem to fit in this film.