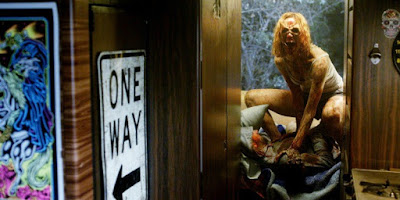 Say what you will about anthology films like XX, there is a section of the market that likes them. I can go either way with them. On the one hand, I appreciate that in horror anthologies, there’s not a lot of filler, mainly because there isn’t any time for filler. Since the film has at most about half an hour to go from start to finish, we’ve got to get down to it right away. The downside of an anthology is that we never really connect to the characters.

That lack of connection is important. For me, at least, horror works in only a couple of ways. The best horror connects us deeply with the characters, gives us some incentive to want them to be successful or at least survive, and deals with the existential problems of life. True, deep existential horror is difficult, but wonderful when it’s achieved. That takes time, though, and in an anthology film, time is exactly what we don’t have. What that means is that we’re going to get the cheap horror film answers here: jump scares and gore. With XX, there’s a real desire in some of these shorts to attempt that deeper horror. There’s just not enough here.

XX consists of four shorts of length varying from about 15 minutes to about 25, resulting in a film that comes in at just over a spare 80 minutes. These are connected by a series of stop-motion animations that are very reminiscent of Jan Svankmajer. They’re interesting and a touch disturbing, but don’t really have a great deal to do with any of the four shorts.

The connecting thread of all of the films is that each is directed by a woman. That might seem a fairly slender thread, but women in the director’s chair in Hollywood are still too much a rarity, and giving four women an opportunity to show some work is a great idea. That being the case, it is perhaps a little unfortunate that three of the films deal overtly with themes of motherhood. For something that could be seen as a breakout idea, we’re a little on the nose with the direction our films are going.

The first film is called The Box, directed by Jovanka Vuckovic. Of the four shorts, this one is probably the most ambitious. Susan Jacobs (Natalie Brown) is riding on a train with her son Danny (Peter DaCunha) and daughter Jenny (Peyton Kennedy). A man seated next to Danny has a box on his lap. Danny asks to look inside the box and seems greatly affected by what he has seen. From that moment on, he stops eating, saying that he is not hungry. Soon after, Jenny stops eating. Susan’s husband Robert (Jonathan Watton) talks to Danny, and soon he stops eating as well.

Segment two, The Birthday Party, is in many ways my favorite of the four, and is directed by Annie Clark under the name St. Vincent. There’s a dark humor to this one. Mary (Melanie Lynskey) is planning a birthday party for her daughter Lucy (Sanai Victoria). She discovers that her husband (Seth Duhame) has killed himself the night before and must find a way to hide the body to prevent the party from being spoiled.

The third segment, Don’t Fall, is directed by Roxanne Benjamin and is the shortest of the four. This one is the closest to a standard horror movie. A group of dumb 20-somethings go camping in the middle of nowhere and awaken an ancient evil that comes for them in the night. That’s almost literally it, and of the four segments, this would be the easiest one to build up into a low budget, feature-length film.

Last is Her Only Living Son, directed by Karyn Kusama. This is the longest of the four segments, and is second only to The Box in terms of its overall ambition. It plays very much like the idea of Rosemary’s Baby about 18 years on. Cora (Christina Kirk) deals with the fact that her son Andy (Kyle Allen) is about to turn 18, and that his real father might be something far darker and more powerful than the man she has claimed was his father. On the verge of 18, Andy is starting to manifest the power to control other people as well as some upsetting physical changes.

The problems with XX are what I mentioned above. The shorts don’t give us enough space to truly explore what the films want to set up, and so all of them feel like they’re getting short shrift. In The Box, it’s clear that whatever the boy sees inside the box is what makes him stop eating. That’s a great premise, but because we’re going to be limited to fewer than 20 minutes, it’s never really built on. And, of course, we don’t see what’s in the box. Don’t Fall is merely a short version of a film like The Ruins or any other film where an ancient evil is awakened. It’s never made clear what or why anything is happening. While Her Only Living Son is given a little more space to breathe, it also never really takes the premise much beyond its starting point, and never really fulfills the ambition it has. The payoff feels underwhelming as well.

In this respect, only The Birthday Party succeeds, and it does so only marginally. It could also use another 10 minutes, perhaps, but of the four shorts, it’s the most fully formed and the one that gets the closest to a real conclusion. The inclusion of a dark humor here helps it a great deal. It’s the only one that veers into something like comedy, and that benefits it greatly.

I can’t help but be a little disappointed. There are some great ideas here. All four of these were written or adapted at least in part by their directors, and all four of these show promise. These are directors who need more space to tell their stories. It would be nice to think that XX might be a launching pad for them into bigger films with larger budgets. I hope it is, because they deserve the shot, and we as an audience deserve to see what they can do with a feature-length film.

Why to watch XX: It has some great ideas in it.
Why not to watch: As with most anthologies, nothing is given enough space to breathe.

Posted by SJHoneywell at 9:35 AM