Films: I, Daniel Blake
Format: DVD from NetFlix on laptop. 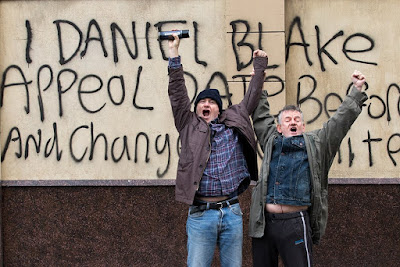 There is a genre of film—not a very American genre in this case—about how much it sucks to be poor. There’s a vast swath of American politics that sees the poor not as people to be helped or even pitied, but as people to be denigrated. It’s why poor people in American movies are often not that poor. In an average ‘80s teen movie, for instance, the “poor” kids still live in decent-sized houses and often have cars that their parents have bought for them. Middle-class qualifies as poor for Hollywood in many cases. Cross the ocean (or the southern border), and you’ll find films about people who are on the fringes of society, barely able to survive. England is great for films like this, so it’s not much of a surprise that I, Daniel Blake falls firmly into this genre.

I, Daniel Blake is one of the modern darlings of U.K. cinema, evidence by the fact that it was released in 2016 and has already shown up in a Criterion edition. I have to say I’m a little bothered by this sort of instant “it’s a classic” acceptance for any film. I enjoyed the hell out of a bunch of 2017 films, and I’d look sideways at a Criterion edition for any of them. It’s too damn soon, too forced. I, Daniel Blake is a fine movie for what it is, but to be given this sort of treatment? It feels premature.

This is a Ken Loach film, and that means a few things. Loach’s films have a tendency to be the sort of anti-Hollywood film that can only come from someone with a particular set of principles. Loach is absolutely and obviously a socialist as well as someone who sat at the table with the Italian neo-realists for a long time. He appears to want his films to depict a savage reality where the average person is ground down by a system that cares more about bureaucracy and efficiency than it does about the people it is allegedly designed to serve. Loach, and in this case screenwriter Paul Laverty, have no faith in the British system of welfare, and they’re going to make sure that those of us in the audience watching the film aren’t going to trust it much, either.

Daniel Blake (Dave Johns) is something like a carpenter who is currently out of work because of a heart attack he suffered on the job. His doctors have not cleared him to work, but the government agency that controls his disability and any assistance he might get has decided that he can work, and so has cut off any assistance he was getting. This has happened despite the fact that his doctor has not been contacted. Daniel wants an appeal, but the process is complicated and a bureaucratic nightmare made worse by being entirely online, something that frustrates the computer-illiterate Daniel.

While dealing with his own issues, Daniel encounters Katie Morgan (Hayley Squires), a single mother with two kids who has just arrived in the area from London. Like Daniel, she is being denied assistance because of a technicality. Daniel decides to help her make her new apartment as livable as possible by fixing a few items and by befriending her children Dylan (Dylan McKiernan) and Daisy (Briana Shann). But we know that things are going to continue to get worse—this is the sort of movie this is, after all. Katie collapses at a food bank and is caught shoplifting at a grocery store. With nowhere else to turn, she ends up in a brothel to keep feeding her kids.

As for Daniel, he is constantly caught between being told to look for work so that he can get benefits and being told that he can’t accept any work he might get because of his heart condition. With no income and no hope of assistance, he is forced to take more drastic measures, which leads us into the third act of the film.

I’m of two minds with this film. On the one hand, it’s a damn fine movie, the sort of movie that is designed to piss off the audience and fill it with a righteous indignation. It’s hard not to respect it, and Dave Johns does a hell of a job in the title role. This is especially impressive given that this is his first film role (although he’s done a decent amount of television).

On the other hand, though, it’s so much a story that you’ve almost certainly already seen. It’s an angrier version of a film like Brassed Off, for instance. In that respect, I, Daniel Blake is another in that line of British anti-establishment, up-the-poor movies like Fish Tank where everyone and anyone with any amount of power and money spends that money and uses that power to absolutely shit on the poor. Admittedly, this is a damn fine version of that story (and I didn’t much like Fish Tank), but it’s a story that’s not uncommon.

And that’s where I sit with this. It’s a good movie—even a very good movie. But I can’t get over the feeling that it’s a movie that I’ve seen before multiple times. But hey, I'm finally done with the 1001 Movies list from last year. Better late than never, right?

Why to watch I, Daniel Blake: Reality is a harsh mistress, but one that needs to be faced.
Why not to watch: You’ve likely seen this before in one stripe or another.