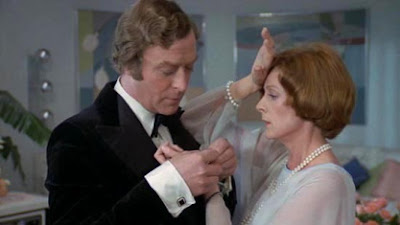 Neil Simon must’ve hated when the ‘70s came to an end. He had 12 plays turned into movies in the 1970s, which is kind of amazing. One of those was California Suite, which was unusual for Simon-penned screenplays in that it has a substantial cast list rather than a couple of major stars in big roles. I can’t say that makes the film more or less than any other Neil Simon script; it’s just something that happens to be true.

California Suite is a title with a double meaning. It takes place in the main in a Beverly Hills hotel in a series of suites. In that sense, the title is literal. It’s also, though, a “suite” of four stories that take place in that location at roughly the same time. At least that’s my assumption. Since the stories don’t really interact with each other at all and the characters from one story don’t appear in the other three, it’s possible that they could be taking place at different times and even at different hotels. In truth, this is one of the weaknesses of the film.

As I said, there are four stories. In the main, we stick with one story at a time with short vignettes of the others along the way, and with a conclusion of all of the stories at the end. So, we will get the opening salvos of three stories right away as well as the bulk of one story. We’ll get refreshers of two of the stories then, and the bulk of the second story. And on and on it goes until the final few minutes when we get resolutions all ‘round.

It makes sense, then to take these stories in order. It is perhaps coincidental that as I’ll be going through the stories in the order they occur in the film, I’ll also be discussing them in the rough order in which I liked them, favorite first. It’s a peculiar truth of California Suite for me that I liked each story less and less as the film continued. That meant that the further I got into the film, the harder it was for me to continue until the end, when I was gritting my teeth until the finish.

The first story is that of Hannah (Jane Fonda) and Bill Warren (Alan Alda), a divorced couple. Bill now lives in California where he works in the film industry as a screenwriter; Hannah still lives in New York and has come out to California because of their daughter Jenny (Dana Plato!). It seems Jenny has run away because she is tired of more or less living on her own and raising herself and would rather live with her father. The old wounds are quickly reopened between Hannah and Bill, with Hannah being the more aggressive and the more ruthless (which also makes her quite unsympathetic). We don’t know until the end of the film where Jenny will end up.

The second story is that of Diana Barrie (Maggie Smith, who won a supporting Oscar for this role) and her husband Sidney Cochran (Michael Caine). Diana has been nominated for an Oscar in an odd moment of art preceding life and has arrived from London for the ceremony despite being very much assured that she will not win. The trip has caused all of her resentments and problems with her husband to come to the surface, the main problem being that he is bisexual with leanings toward being exclusively gay. Smith is wonderful in this role, and of the four, this is probably the best acted, if not the most compelling story.

Third comes the tale of Marvin Michaels (Walter Matthau), who has come to California for his nephew’s bar mitzvah. His brother Harry (Herb Edelman) is, despite being married, absolutely sex crazed and girl-starved and, after a night of drinking with his brother, surprises the conservative Marvin with a prostitute named Bunny (Denise Galik) in his room. Marvin wakes up the next morning with Bunny passed out drunk and his wife Millie (Elaine May) due to arrive at any minute.

Last and certainly least is the story of two couples on vacation together. Dr. Willis (Bill Cosby) and Bettina Panama (Sheila Frazier) and friends/coworkers Dr. Chauncey (Richard Pryor) and Lola Gump (Gloria Gifford) have had a series of accidents and misfortunes on their trip. This culminates in near-constant aggression between the couples that is to be decided by a cut-throat doubles tennis match.

I’ve already spilled the beans on my opinion here. I like the stories less as less as they progress. The first is compelling because it feels real, and while the acting may be superior in the second story (it is Maggie Smith and Michael Caine, after all), this is handled well by Fonda and Alda equally. Smith and Caine are wonderful in the second story, which is also good, but less interesting to me in some respects than the first. The movie falls hard off the cliff at this point. The third story is clearly meant to be funny, and it really isn’t. Matthau is a good and sometimes great comic actor, but here, he’s given a farcical role that doesn’t allow him to do anything but be a clown. It’s so evident that he is hiding something that his wife is required to be a dimwit to not notice what is going on around her. And then, at the end, we’re left with four unpleasant characters, or at least two characters so unpleasant that they make everything and everyone around them worse, including their wives. I didn’t care about them at all.

What this means is that California Suite pretty much averages to being half worth seeing and half not so much. Actually, since the stories tend to get shorter as they go on, you can pretty much watch the first 70 minutes and then skip to the last seven or eight for the best parts of what is on offer here. Two out of four ain’t terrible, but it also ain’t that great.

Why to watch California Suite: Two stories are good, or at least interesting.
Why not to watch: Two stories really aren’t.