Film: Heaven Can Wait (1943)
Format: DVD from NetFlix on laptop. 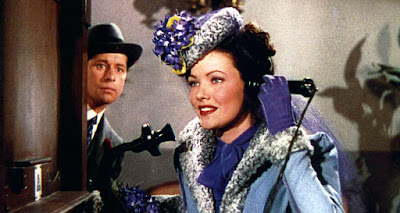 I’ve enjoyed the films of Ernst Lubitsch that I’ve seen in general, so I was curious about Heaven Can Wait. What I knew going in wasn’t much. The main thing I knew was that the 1978 movie of the same name is actually a remake of Here Comes Mr. Jordan and not this movie. In fact, this film, while there are similar themes, is almost the opposite in where our characters take the narrative.

But, like both Here Comes Mr. Jordan and the 1978 Heaven Can Wait, we’re going to be dealing with someone who has died. Our corpse is Henry Van Cleve (Don Ameche), who wanders into a large, impressive entryway where he meets a man known as His Excellency (Laird Cregar). It’s soon clear that we are at the entry to hell, and Henry is of the opinion that this is where he belongs. His Excellency is not convinced, though, so Henry is forced to tell his life story to justify his entry into Perdition.

I’d love to tell you that what follows is a tale of debauchery and depravity, but I can’t. I can’t even tell you that it’s a story of mild wickedness, because it’s not that, either. Truthfully, Henry Van Cleve is a bit of a ladies man, pretty selfish, and a rich, entitled asshole. He’s the kind of guy you’d shake your head at or curse out for cutting in line in front of you, but he barely ranks a notch on any real scale of evil. So, while we in the audience keep hoping that something really scandalous might happen, we’re given instead Henry’s tame tales of assholery.

We learn that Henry was incredibly spoiled not only as a child, but well into adulthood. His mother (Spring Byington) babies him and makes excuses for him while his father (Louis Calhern) is just generally clueless. Neither of them seem to understand the concept of sexual attraction (or even sex), and are thus scandalized when 15-year-old Henry has (gasp) had champagne in public in the company of his tutor (Signe Hasso). A servant! Can you bear the shame? Fortunately, Henry’s grandfather (Charles Coburn) isn’t an inbred moron and manages to salvage the situation.

Important event two happens years later, just as his days of chasing chorus girls are coming to an end. Henry meets a young woman and immediately falls for her. It turns out that the young woman is Martha Strabel (Gene Tierney), who has just become engaged to Henry’s cousin Albert (Allyn Joslyn), who is the human equivalent of plain yogurt, and the kind of person who would remind teachers to assign homework. Martha has agreed to marry Albert only because he is the first thing her feuding parents (Marjorie Main and Eugene Pallette) have agreed on in years. Of course that won’t do, though, so Henry sweeps her almost literally off her feet and they run out and elope on his birthday, and become pariahs to both families except for Henry’s grandfather.

We’re going to go through this twice more. Once on Henry and Martha’s 10-year anniversary, when she runs away and attempts to reunite with her parents because she has discovered that Henry still has kind of a thing for chorus girls. It’s never really mentioned if he’s having sex with anyone aside from his wife—since this film is so simon-pure in so many ways, it’s kind of implied that he’s not really doing much more than just hanging out with them and buying them gifts. Anyway, we’re going to get a resolution here, and the marriage will end up being a happy one until Martha dies and Henry goes back to his old philandering ways, much to the embarrassment of his son (Tod Andrews).

And really, this is the whole damn thing. Henry more or less claims to be a ladies man but doesn’t really have that much game. His penchant for attempting to attract women and perhaps be unfaithful to his wife makes him, to his mind, the worst person in the world, ready to be sitting at the left hand of Satan himself and taking on the debasement of the human world. What this means, in effect, is that in many ways Henry is as naïve as his parents, since he can’t imagine anything worse than being attracted to leggy dancers. This is a long way to go to have someone learn that he’s not really that bad; he’s just kind of a dick.

The one thing I have to say in this film’s favor is that it’s pretty. It’s always interesting to see films of this era in color, and in this case, the main benefit is seeing the rather spectacular outfits that Gene Tierney is squeezed into. Otherwise, I don’t really understand the nominations here. Lubitsch seems to have been nominated based on his reputation rather than any intrinsic quality of the film we’re given. I can also only think that the inclusion of this film as a Best Picture nominee is what helped drop the Academy back to five nominations the following year.

Heaven Can Wait felt eternal to me. It felt like I would never get to the end of it, and with a movie that runs less than two hours, that’s not a good sign. It’s worth noting that I am very much in the minority here. Most people evidently find this a charming little romp.

Why to watch Heaven Can Wait: The costumes, particularly Gene Tierney’s, are lovely.
Why not to watch: Where do I begin?

Posted by SJHoneywell at 3:11 PM