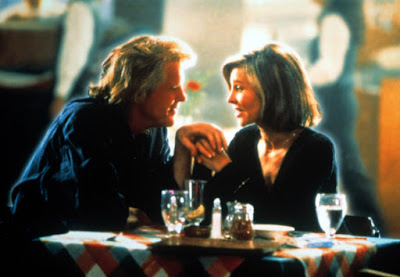 I have a serious confession to make about the movie Afterglow. I started watching this movie several days ago and stopped about 40 minutes in. There’s a specific reason for this. Every year for the past few years, I have tracked everything I watch on Letterboxd, creating a new list each year. Because I watch a little more than a movie every day, I access this list frequently, and because of how Letterboxd works, I see the top few entries of the list every time I go to it. The thought of spending an entire year having to look at the poster for Afterglow was something I didn’t want to happen because I knew it would piss me off.

Yes, I hate this movie in a way I typically reserve for white supremacists, television preachers, and people who don’t use their turn signals. This is the sort of movie that appears to have been written by people who have too much money and no real problems for people who either want to live in a world of too much money and no real problems or already do and think their non-problems are the most important things in the world. Everyone in this film is hateful, stupid, selfish, and not worth anyone’s time. This is cinematic solipsism, desperate navel gazing masquerading as being meaningful. Sorry for the rant (there will be more later), but sometimes I need to get this kind of thing out of my system.

That said, I don’t that even figuring my own biases and dislikes into this that I’m too far from the reality of Afterglow. Put down to its elevator pitch, this is a movie where an older couple and a younger couple more or less switch partners without really knowing it. To put this another way, there are two couples, everyone is having an affair, and no one involved in any of the affairs is outside of those two couples. It’s not even interesting enough to give us gay/lesbian couples. It’s just a pair of May/December affairs that come to different levels of fruition.

Phyllis Mann (Julie Christie) is a faded actress now living in Montreal. Her marriage is in trouble and has been for years. It’s when we are introduced to her husband that I knew I was going to have problems with Afterglow: his name is literally Lucky Mann (Nick Nolte). Their troubles started when Phyllis revealed to Lucky that their daughter Cassie (Genevieve Bissonette) is not his biologically, but that of one of her frequent co-stars, Jack Dana (Alan Fawcett), who has just died. Lucky is what we’d generally call today a contractor; he’s a glorified handyman who gets paid in sex as much as he does in cash.

Couple number two is the Byrons, Marianne (Lara Flynn Boyle) and Jeffrey (Jonny Lee Miller). Jeffrey seems to have a penchant for older women, evidenced by his near-constant appraisals of his older secretary (Domini Blythe). Marianne is of that class of idle rich women who don’t really do much of anything. She’d like to start a family, but Jeffrey seems to be uninterested in her in general. Regardless of her husband’s indifference, she decides to fix up a room in their apartment as a nursery, and naturally, Lucky gets the call.

So, with both marriages in tatters, Lucky and Marianne immediately begin an affair. Phyllis, knowing where her husband likes to operate, stakes out his favorite spots to watch him in action. Meanwhile, Jeffrey, seeing a place circled on the calendar, goes to spy on his wife, and instead meets Phyllis. You can figure out at least some of the rest from here, and while there may be a mild surprise or two in the offing, there’s not a lot that you won’t expect or can’t figure out for yourself with this set up. After all, there are only a couple of places for it to go.

I can barely begin to express my deep level of hatred for these characters. Julie Christie’s nominated performance is the reason I watched this, so I’ll start with her. Phyllis is an older, female version of Benjamin Braddock. She’s disaffected and drifting, not really sure what anything, including her life, means any more. She’s estranged from her daughter, her husband is a dog without a leash, and she doesn’t care anymore about anything. Christie is fine in the performance—she’s a good enough actor that she generally is, but in this case, it’s in service of a film about pointless, rich assholes who find their own genitalia to be the biggest concern of the entire world. In fact, the whole thing is set to a soft jazz saxophone soundtrack that belongs on late-night Cinemax.

Nick Nolte is similarly capable in his role, but Lucky is a cipher, guided entirely by his nether regions. He’s the sort of character who manages to get every woman he meets into bed because that’s what the plot requires and for no other discernable reason.

As for the Byrons, I don’t even know where to start. Lara Flynn Boyle can be an appealing actress, but Marianne Byron is a complete nothing. She appears to have no life outside of sitting in her apartment and waiting for her husband to come home so that he can avoid impregnating her. They clearly have scads of money, and she has nothing to do—not even go spend it. For her, the biggest issue in the world is her not having a child immediately. As for her husband Jeffrey, the less said the better. He’s an insufferable smug douchebag, and his portrayal by Jonny Lee Miller is one of the stiffest, most uncomfortable performances I have seen in a long time. He’s terribly miscast because he simply doesn’t have the sort of aura to him that the role needs. He’s supposed to be along the lines of a Patrick Bateman from American Psycho, but his attempted sex appeal is so obviously a sham.

I hated this movie. I hated all of the characters and I hated the plot. I hated the partner-swapping aspects of the story. I hated that Jonny Lee Miller’s attempts at suave seduction play like a 13-year-old boy’s first inklings of what a seduction must be like. I hate these overly-wealthy-and-blasé-because-of-it characters and couldn’t wait to get this thing off my screen.

It’s been some time since I’ve had a good rant, but I genuinely attempt not to watch bad movies when I can avoid it. Last year, of the 398 movies I watched, only eight were ranked by me below 2 stars on Letterboxd. If Afterglow isn’t one of the ten worst films I see this year, I quit.

Why to watch Afterglow: Someone has a gun to your head.
Why not to watch: All of these people are awful and so is the story.

Posted by SJHoneywell at 4:03 PM