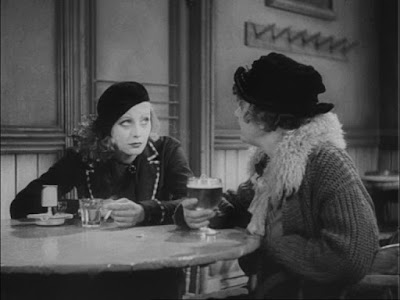 I have gotten into the habit of picking up odd movies now and then when I find them. Most of the time, these are movies that I know I’ll need to watch for one list or another. I don’t just buy indiscriminately, though. Many that I buy are notable in one way or another. That’s the explanation for why I own a copy of Anna Christie. Sure, I knew I’d have to watch this eventually, but I bought it not just for that but because it’s also Greta Garbo’s first talkie. Fans who had desperately wondered what she sounded like finally got their chance.

What this means is that Anna Christie is an interesting piece of film history. It also means that it doesn’t have that good or that interesting because it relied on this gimmick to get people to go see it. What we’re going to get instead is a pretty straightforward melodrama focused on Garbo’s character with some assistance from Charles Bickford, Marie Dressler, and George F. Marion.

We start with Marthy (Marie Dressler) and Chris Christopherson (George F. Marion), who are sort of a couple. Actually, they’re more of a trio, the two of them and booze. Chris captains a barge when he’s not boozing. One night he gets a letter from his daughter Anna (Greta Garbo). Fifteen years earlier, he dropped her off at a farm in Minnesota since he didn’t think that he could adequately care for her. Now, she’s showing up. Chris assumes that the now 20-year-old Anna is still perfect and pure, but of course that’s not what’s going to be the reality. Realizing that his daughter could show up at any moment, Chris leaves the bar to find some food to soak up some of the booze. That, naturally, is when Anna walks in.

Anna is not the pure, sweet, and innocent girl that Chris thinks she is. While he’s out, Anna bonds with Marthy, not knowing that Marthy has been keeping time with her father nor that Chris has just kicked her out so she doesn’t corrupt Anna. Anna, though, is already pretty corrupted. She talks about her life on the farm and more or less says that she was molested by one of the farm hands. Eventually, she worked in a brothel for a couple of years, but has left that life for an attempt at a clean start.

Anna doesn’t tell her father any of this. The two go off on Chris’s barge. During the sail, they rescue a few sailors including Matt Burke (Charles Bickford), who quickly falls for the young, pretty, and still presumably innocent Anna. Anna seems to return his affecdtion, and soon enough the two are threatening to get married. Anna’s father stands in the way of this, since he doesn’t want her to marry a sailor. And her past stands in the way as well.

So here’s the thing: if you can’t figure a rough idea of how Anna Christie is going to end, you haven’t seen a lot of movies from the pre-code days. There is really only one way that this can end and still remain true to the unwritten rules of the cinema. It’s not hard to figure out where we’re going to end up here. What saves Anna Christie in this respect is that this is from the earliest days of talkies. I have to give some leeway: most filmmakers were so enamored of sound that they hadn’t really figured out how to use it, and the story was secondary to Garbo and it being a talkie. So, while the plot suffered, it doesn’t seem that the movie experience suffered at all.

There is a much bigger problem for Anna Christie to overcome, and it’s a problem that the film simply isn’t up to. I don’t for a second buy a romance between Greta Garbo and Charles Bickford. Bickford plays Matt Burke as a hulking lunk of a man, good for a brawl when he needs to be and ready to drink the town dry. While Garbo is not playing a saint here, she’s still Garbo in the role, and an Irish-accented deckhand doesn’t seem like her style, even if she is playing a fallen woman. There’s no way I see Anna falling for this guy at all, and it damages the credibility of the movie.

It’s a serious issue. I buy Garbo as a former brothel drudge. I even buy Matt Burke as a burly ship hand. But I don’t buy Garbo falling for this gormless oaf. Give the role to someone like Paul Muni and I buy it completely.

Beyond this, Anna Christie is a pretty straightforward melodrama. Can the burly sailor who has doubtless frequented plenty of brothels in his own time truly love a girl who has touched more than one penis? If the answer to that question interests you, go for it.

For all that, Garbo is decent. She always was. Sure, she had a tendency now and then to overplay things a bit, but that doesn’t hurt in an early talkie melodrama. This is most noticeable toward the end of the film; she’s at her best in the early going. Marie Dressler, as always, is a treat. So, in that respect, it’s interesting, but there’s nothing here to really warrant more than a single viewing, and that not even with full attention. You can get by with this just sort of nodding at it now and then.

Why to watch Anna Christie: Garbo’s first speaking role.
Why not to watch: Like many an old movie, it’s melodramatic and short on surprises.

Posted by SJHoneywell at 7:10 PM