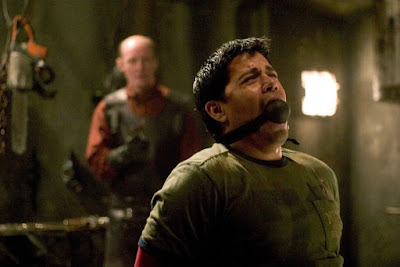 The things I do for this blog. No, seriously. I’ve gone to some dark places here and I knew when I signed on for this that I would be going places I didn’t want to and that I’d come out the other side with some scars. When I started this project, there were places I hoped I wouldn’t have to go. As the project expanded, some of those darker corners of the cinematic experience came closer and closer. And so, now I’ve gone where I said I wouldn’t. I watched Hostel. Once having done that, I figured there was nothing to lose in watching Hostel Part II.

Before I get into this, and I’m going to tell you now that this is going to be a relatively short pair of reviews, I should make a few admissions. The first is that I don’t like the idea of torture porn, let alone the reality of it. The idea that it’s somehow entertaining to witness gratuitous and meaningless pain is unpleasant to me to say the least. The second admission is that I genuinely dislike Eli Roth. He just looks like such a poser, like a guy who thinks he’s got street cred because his dad bought it for him.

Anyway, I’m not going to do my typical here and go through a massive run of the plot of Hostel or Hostel Part II. This isn’t some moral stance on my part; it’s because neither of these films have much in the way of an actual plot. In Hostel, a couple of Americans named Josh (Derek Richardson) and Paxton (Jay Hernandez) and their Icelandic friend Oli (Eythor Gudjonsson) are backpacking through Europe when a chance encounter leads them to Slovakia with the promise of endless sexual delights. What the find instead is a collection of people who pay scads of money for the privilege of torturing and killing people who have been more or less kidnapped at the eponymous hostel. In Hostel Part II, it’s the same thing except that this time, it’s three women named Beth (Lauren German), Whitney (Bijou Phillips), and Lorna (Heather Matarazzo). The two films are so similar in their lack of plot that it’s not even worth distinguishing them as separate movies. Essentially, they are two episodes of the same shitty show. I said in the paragraph above that I’m not going to take a moral stance on this, although that wouldn’t be difficult to do. I’m going to stick entirely with the cinematic problems of both Hostel and Hostel Part II. I don’t have a real problem with blood or gore in horror movies. I don’t specifically seek it out, but when it’s used effectively, it’s another tool in the arsenal of the filmmaker. I have a genuine problem with blood and gore used simply for its own sake. Gore that is included simply to be included doesn’t interest me. And that’s all that Hostel and Hostel Part II have to offer us. They are both entirely gratuitous, offering up splatter simply as an end in and of itself. That’s not interesting. It’s not even horror. It’s just grotesquery.

While both Hostel and Hostel Part II are more or less scenes of continuous and gratuitous gore, both films make a specific, clear political statement. In many ways, these films are the clearest realization of the ultra-nationalist “America First” philosophy. I’m not going to say that these films are somehow responsible for much of the current conservative xenophobia, but the elements of it are here. Hostel and at least its first sequel are perhaps the purest distillation of post-9/11 American fears. “Don’t travel to other parts of the world,” these films say. “Stay home where it’s safe and where you won’t get randomly dragged into some European colonialist’s sick torture fantasy.” It’s worth noting that while the events take place in Eastern Europe and a former Soviet-bloc country, the torturers that we encounter come from Western Europe. Y’know, our allies.

There’s a part of me that feels like I should have more to say here. I typically write somewhere in the neighborhood of 750-1000 words about every movie I watch for this site (with a few exceptions), and here I am not so much writing about but writing off two films in that space. And that’s the other significant problem with the two Hostel films. There’s so little here that there’s nothing else to write about. If you were expecting something roughly twice this length, I won’t say I’m sorry to disappoint you, because Eli Roth consistently disappoints me.

Why to watch Hostel: For whatever reason you’ve lost all sense and reason.
Why not to watch: You still sometimes have hope that the world isn’t completely shit.

Why to watch Hostel Part II: Nihilism is its own reward.
Why not to watch: Because there’s a part of you that is still essentially human.

Posted by SJHoneywell at 4:47 PM