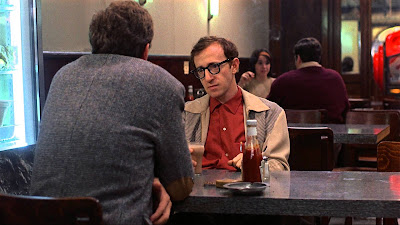 This is going to be one of “those” reviews. Had I had the foresight to watch The Front a couple of years ago, I’d have been able to address it as it stands rather than addressing the elephant still in the room, in this case the sexual abuse allegations against Woody Allen. In fact, I’m kind of happy I am addressing it now, because The Front calls up one of the biggest issues that needs to be addressed when it comes to the works of accused filmmakers and actors.

That question is the role of the other people in the film. The Front is a film that specifically focuses on the people who were affected and disenfranchised by the Hollywood Blacklist. On the surface, it’s a mild comedic tale. A blacklisted writer (Michael Murphy) goes to his friend, cashier Howard Prince (Woody Allen) to act as his front. Essentially, Howard will put his name on television scripts and take 10% of the pay. Since Howard has a number of debts and needs the money, he agrees, and soon he’s fronting for a trio of blacklisted writers. But there is a deeper issue here. The Front was written by a blacklisted author (Walter Bernstein), directed by a blacklisted director (Martin Ritt) and features blacklisted actors like Zero Mostel in prominent roles. The Front exists to expose the wrongs that were done to these people. Avoiding the film to avoid Allen seems to cost us quite a lot.

It’s worth saying at this point that I have always liked Allen as a writer and director far more than I have ever liked him as an actor. His shtick has always been a particular neurosis and, perhaps tellingly given current accusations, near-constant sexual hang-ups. Because of this, he comes across as whiny and frequently pathetic as an actor. There are elements of that in The Front. Again, perhaps tellingly, this comes out in the character of Howard Prince only when he is dealing with Florence Barrett (Andrea Marcovicci), his love interest.

The biggest issue I have with The Front is not Woody Allen as an actor, but the character that Allen is given to play. There is a great deal of potential for the Howard Prince character, and some of that potential is realized. At its heart, the movie starts with Prince wanting only to help his friend because he desperately needed the money. Howard’s life as the film begins sees him deeply in debt because he has booked some bad bets. The 10% he agrees to take from his friend’s screenplays are a way out of debt for him. By the time the film comes to a close and Howard is forced to testify in front of HUAC, he appears to have grown both a spine and a conscience. That’s good, and it’s kind of expected.

The problem is that the real story here is that of Hecky Brown (Zero Mostel). Hecky, we’re told, once marched in a May Day parade and subscribed to a communist newsletter, but he admits that he did this entirely because he was interested in a woman. Regardless, he is forced to write a letter disavowing his earlier actions, but he doesn’t name enough names, and thus loses his position on a popular television show. Desperate, he goes back to the Catskills circuit, where he’s promised pay well below what he is used to and then paid half of that. When he complains, he’s run out of the resort as a communist. Eventually, Hecky puts himself up in a swank hotel room and jumps out the window. That, more or less, is the story of the blacklist, and it’s entirely wrapped up in Hecky’s tale, which is secondary in The Front.

In a sense, The Front has the same problems as a movie like The Help. Bluntly, it makes heroes out of the wrong people. In The Help, we’re ostensibly told of the plight of African-American maids in the deep South right around the time of the Civil Rights era. But we’re told that story from the point of view of a white woman who decides that the eponymous help need to be rescued. Over and over again, many of the black maids are treated as needing help and being virtually incapable of doing anything on their own. The story credits the white woman with “rescuing” the black women, and then gives that white woman an out that prevents her from dealing with any of the consequences of her actions, leaving the other women there to suffer those consequences.

The Front doesn’t quite go that far because Howard Prince does suffer some consequences here. However, it makes him the hero of the film when, at least for the first two acts, his actions are entirely venal. He becomes the hero of the film because he changes his mind. Well, his girlfriend Florence walks out of her job at the television station because she disagrees with how Hecky was fired. She starts her own anti-blacklist newsletter and winds up on lists herself. Why the hell isn’t she the hero? Why isn’t Hecky?

Perhaps The Front isn’t as dire as I’m making it out to be. It does have some good moments in it, and when Allen isn’t whining about not having sex with Florence, he’s pretty good in the role. Zero Mostel is both tragic and charming. And, while the film does take a more comedic approach to the idea of the blacklist, there is a serious undercurrent here that is worth investigating.

Truth be told, it’s not a bad film. I’m just a little cranky at the moment. But I can say that in terms of my own integrity, the problems I have with The Front have little to do with Allen’s presence in the film. About 95% of my complaints would still be here with, say, Charles Grodin in the same role.

Why to watch The Front: A different blacklist story.
Why not to watch: The best story is given second billing.

Posted by SJHoneywell at 5:47 PM