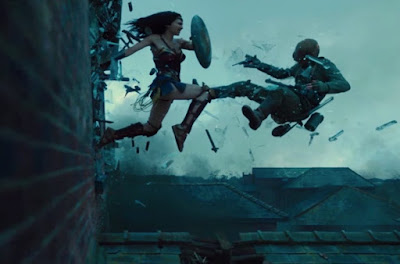 There are a lot of different ways that I could approach Wonder Woman. Do I look at this as just another superhero movie? Is this the first salvo in a world where women are actually going to be taken seriously as filmmakers? Is this yet more evidence that moviegoers care more about story than they do about specifically having a male character at the center of the film? All of these are probably true—and with the last possibility there, it’s a position I’ve held for some time. While not everyone looks at movies the way I do, there is plenty of evidence that the majority of the general movie audience are interested in story and character and far less interested in things like gender and sexuality. A good story well-acted is just that, and for most people, that good story could be about anybody—any gender, any ethnicity, etc.—and the good story will still play. That, more than anything, is the success of Wonder Woman, and the idea that people everywhere were shocked by its success is kind of sad.

The chances are pretty good that you’ve already seen this, so I’m not going to go into a great amount of detail on the plot. A group of essentially immortal warrior women live on an island shielded from the rest of the world. These women were created by Zeus to act as a guard against the treachery of Ares, who sought to destroy mankind. Among the Amazons is young Diana (Lilly Aspell), who wants to train as a warrior, but is prevented by her mother, Hippolyta (Connie Nielsen). Diana (Gal Gadot as an adult) trains with her aunt Antiope (Robin Wright), and it’s a good thing she does, because eventually, the rest of the world is going to crash in on the hidden island of the Amazons.

This happens when Steve Trevor (Chris Pine), acting as a spy for the British, steals the notebook of German scientist Isabel Maru (Elena Anaya), also known as Dr. Poison. Dr. Maru is searching for the ultimate chemical poison to unleash on the fields of World War I to turn the tide for Germany. Steve’s plane crash lands just off the coast of the island, and he is rescued by Diana. His German pursuers find him nonetheless, and battle occurs. Eventually, Diana decides that she must take part in what Steve is claiming is the war to end all wars.

Ultimately, Diana is convinced that all of this is happening because Ares is returning, and in hre mind, Ares is most embodied by Dr. Maru’s boss, General Ludendorff (Danny Huston). She convinces Steve to get her to the front, and he enlists the support of Etta Candy (Lucy Davis) and a trio of friends: spy and agent Sameer (Said Taghmaoui), sharpshooter Charlie (Ewen Bremner), and smuggler Chief Napi (Eugene Brave Rock). He is also quietly endorsed by British War Cabinet leader Sir Patrick Morgan (David Thewlis). Battle and badassery ensue.

Here’s the thing: Wonder Woman does just about everything right, and that’s a shocking thing for me to say about a movie that was written and produced in part by Zack Snyder. Snyder’s hand can be seen at work in places here, especially in action sequences, but this is very much the production of Patty Jenkins, and it shows. There are a number of things that make the movie work, and all of them needed to be here to make the film work at all.

First, and primarily, is Gal Gadot. It would be easy to simply stop with the fact that Gal Gadot is literally one of five most beautiful women on the planet and stop there, but that would be monumentally unfair to her. There are plenty of people, male and female, who are pretty to look at and who can’t formulate a sentence in front of a camera. Gadot manages to make Diana incredibly tough and charmingly naïve, not an easy combination. This is an acrobatic and athletic performance, a true action movie role, and Gadot makes it look natural. But she also brings a great deal of personality to the role, and that seals the deal.

Chris Pine deserves a lot of credit as well. It would be easy for Steve Trevor to more or less be a male version of Lois Lane (as he generally was in the comic books, at least in the Golden Age). Trevor as a character needs to be able to stand on his own and complement Diana without either eclipsing her or being buried by her. Pine does this through a progression of slow revelation in the character. Initially, it is him pulling her along a beach out of danger. Soon after, it is him trying to keep her safe in dangerous situations. It concludes with him assisting her on attacking enemy positions, being the support for her offensive. It’s smart, because it feels natural, and it makes sense that a man during World War I would have serious reservations about putting a woman into combat and would take some convincing to get her there.

It’s also worth calling out Patty Jenkins here. While there are those moments of slow down/speed up action sequences that Zack Snyder apparently can’t live without, these are used well and intelligently rather than gratuitously, acting more as slow motion to truly show the action than as ways to speed through the battle. It’s Jenkins who is tasked with making all of this work, though, and of keeping the story going between the action sequences. Don’t mistake this—the action sequences are one of the reasons to show up for Wonder Woman, but the movie does not slow down or feel sluggish when there is no action on the screen, and that in large part is the responsibility and success of Jenkins.

These are three important points, but there’s a lot more. Intelligent characterizations of minor characters, for instance. It’s true that Ludendorff is perhaps undefined and one-dimensional, and the same can kind of be said about Isabel Maru, but I’m kind of okay with that. This is, ultimately, an origin story, and the focus is thus necessarily on Diana. This doesn’t feel like an origin story, though. It dispenses with backstory quickly and efficiently, giving us just enough to define our characters and get us into the story.

There’s a lot to like here. In fact, my only real complaint is one that I would have in any event—I don’t like the name of the character. “Wonder Woman” just doesn’t work for me as a superhero name, something that is true for me with a decent percentage of DC heroes (“Aquaman” strikes me as a particularly dippy name). That’s no one’s fault, and is hardly a reason to avoid the film…especially because I’m not sure Diana is actually ever called that in the course of the film.

I haven’t yet seen Justice League and I’m not terribly interested in it, but if I am, it’s specifically to see more of this incarnation of Diana. I’m curious to see where this ends up come Oscar nominations in about 10 days. It’s a genre typically ignored for the big awards, but after the scandals of last year, it may be impossible to overlook.

Why to watch Wonder Woman: This is the template for DC superhero movies…or it should be.
Why not to watch: No good reason—it’s a solid winner.