Vampire (More than a) Weekend 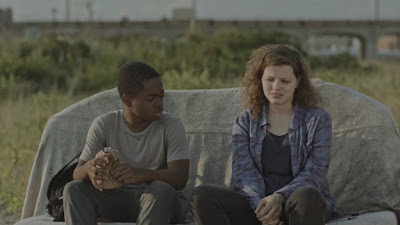 The last couple of years have been great for horror movies. Living in a world that seems to be constantly and continuously spiraling out of control on many fronts often has that sort of impact on the genre that deals specifically with both the real and unrealistic fears of the world. When a genre gets this sort of creative bump, there are going to be films that are left behind, ignored and overlooked. The Transfiguration is one of those films. Listed as a 2016 release, it didn’t really hit theaters until April of last year, and then made such a small ripple that not many people seem to have heard of it.

It’s also not a particularly easy film to classify. It is very much a film that plays on vampire lore, making it a vampire film in many ways. It is also not entirely clear if it is a film that wants to accept the supernatural aspects of vampirism or instead wants to travel down the road more or less paved by Martin. Are we dealing with a real vampire here or are we simply dealing with a very disturbed and disturbing young man?

That young man is Milo (Eric Ruffin), who lives with his older brother. We learn eventually that his father is gone and that his mother killed herself by slitting her wrists. Milo is friendless and a social outcast, often picked on by the gang-banging kids in his neighborhood. What they don’t know is that Milo has both an obsession and a terrible secret. Milo is obsessed with vampires and vampirism. He watches vampire movies exclusively, having a huge collection of vampire films on VHS. He also believes himself to be turning into a vampire, a transformation that he encourages by regularly killing people on the margins of society and drinking their blood. We get our first (ahem) taste of this in the opening scene when we meet Milo drinking the blood from the neck of a man in a public bathroom stall.

Things change at least marginally for Milo with the introduction of Sophie (Chloe Levine), a girl about Milo’s age, who moves into his building. Sophie lives with her abusive grandfather and is a cutter, slashing her arms with a razor blade in order to feel something. While Milo manages to freak her out multiple times—trying to drink the blood from her arm and showing her videos of animals being slaughtered—the two eventually form a sort of bond. For her, Milo is someone who can and will accept her and give her a way to stay out of the abusive clutches of her grandfather.

I’m not going to go further into the plot, because it’s not so much a plot as it is a sort of character study of Milo. The Transfiguration wants us to perhaps understand him and sympathize with him, but Milo might not really be someone we are capable of understanding in any real way.

The Transfiguration is not an easy watch. It is very slow, but not really a slow burn movie in any real sense. A great deal of it is about this mental and emotional change that Milo is going through, but Milo, because of who and how he is, has the flat affect of someone deeply in the throes of schizophrenia. We don’t get a great deal of emotional connection to Milo because he appears to be incapable of emotional connection to anyone despite his friendship with Sophie and his more or less normal relationship with his brother Lewis (Aaron Clifton Moten).

This is both the biggest strength and weakness of the film. Milo’s emotional deadness infects the entire film since it is more or less his story and from his point of view. It gives the film a truly disturbing edge, a sort of unclear tension that hangs over it that never feels resolved, like the last note of a musical piece that never gets played. That tension that gives this film such a disturbing feel also makes it difficult to watch. It’s hard to become emotionally involved with characters who don’t feel emotionally involved in their own lives.

Make no mistake, though, The Transfiguration is a truly disturbing film. Much of that comes from the simple fact that Milo is who we have as a sympathetic character and he is very much unsympathetic in many ways. It’s easy to feel sorry for him as a bullied loner, yet it is clear from the opening scene that he is both a killer and completely cold-blooded about it. In that sense, this is more reminiscent of Peeping Tom than it is even a vampire-related film like Martin.

The Transfiguration is a hard film to like. I very much respect what it is doing or trying to do, even if doing so makes for a very unpleasant film all the way through.

Why to watch The Transfiguration: It is coldly and straightforwardly disturbing.
Why not to watch: It has a completely flat affect that, while intentional, makes it hard to watch at times.

Posted by SJHoneywell at 2:09 PM