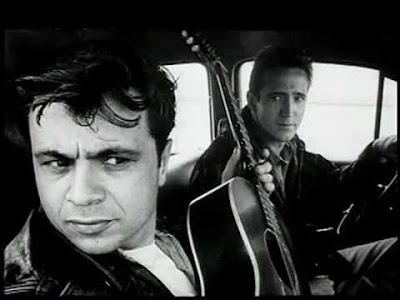 I’ve put off watching In Cold Blood for a few reasons. The first was that I wasn’t sure of how well it would hold up to Capote and the non-fiction novel written by Truman Capote. This is one of those instances where I’m familiar with the source material, and in this case, that source material has earned all of the acclaim it has gotten. The book is staggering and brilliant. But I’ll admit that a part of this comes from the odd story of Robert Blake. Do I really want to spend time watching a movie starring Blake as a murderer when he may well be a non-convicted murderer in real life?

That is the entirety of the movie, though. In Cold Blood is essentially the story of the murder of the Clutter family in Kansas by Dick Hickock (Scott Wilson) and Perry Smith (Robert Blake). Where it differs is the focus. While Capote’s book takes a more clinical and omniscient perspective and the film Capote sits entirely in the world of the author’s struggle, the film version of In Cold Blood is significantly focused on the story of the criminals. We won’t spend the entire film there, but we do spend a great deal of the film’s running time in the company of Dick and Perry.

What makes the crime both fascinating and terrifying from virtually any point of view is its terrible randomness. Hickock and Smith, apparently acting on a tip from another inmate, believed that the Clutter family had a significant amount of money in their farmhouse. The duo broke in, stole a few dollars and items, and then slew the entire family before heading to Mexico. Ultimately, they were only captured because they returned to the United States, stole a car, and passed a number of bad checks.

In Cold Blood feels like a police procedural more than anything else. While there are moments when it seems to want to dive into the psyches of the two killers—particularly that of Smith—it doesn’t really go there that often. While it’s clear that both men, again, especially Smith, are troubled, In Cold Blood doesn’t want to attempt to psychoanalyze them or give them anything more than the motive they evidently gave themselves.

In Cold Blood does a lot of things right. One of those things is coming across like a documentary. While it’s clearly not, it does have the feel of it—much like Capote’s book was the creation of the non-fiction novel, In Cold Blood the film feels like an acted documentary. While this is very much Wilson’s and Blake’s movie, much of the success of the film comes from John Forsythe as Alvin Dewey, who ultimately cracked the case and arrested Hickock and Smith.

But here’s the thing. First of all, it’s very weird to watch this now given the history of Robert Blake. If you were not aware, Blake was arrested a number of years ago and tried for the murder of his wife. He was eventually acquitted, but was also sued in a civil suit and lost, having been found responsible for her death. It’s very weird watching a man accused of killing his wife playing a man guilty of murdering a family. There’s a large part of me that doesn’t know how to approach that.

The other thing is this: In Cold Blood is interestingly made and filmed. There’s an overall style to it that gives it that unique feeling of being both an acted film and a documentary at the same time. I understand its multiple nominations. It’s interestingly directed, and the adaptation is strange and kind of wonderful in spite of itself and in spite of the story. Even the soundtrack—done by Quincey Jones, no less—is pretty great. But I don’t know that I like it. It’s not an easy film to like.

So, for all of that, it will ultimately have to be a film that I merely respect, but find kind of unpleasant.

Why to watch In Cold Blood: It feels real.
Why not to watch: Perhaps a little too real?