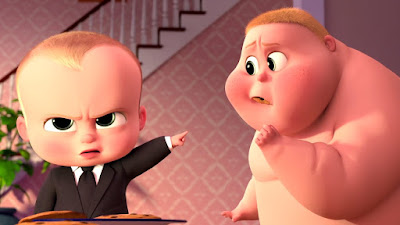 When The Boss Baby was nominated for Best Animated Feature, I knew that eventually I would have to watch it. Since it is streaming on NetFlix at the moment, I figured that I could knock it out quickly and therefore not have it hanging over my head for too long. After all, this is the nomination that caused raised eyebrows around the country (at least) since once again a LEGO movie was left off the nominations. No LEGO Batman Movie. Instead, we get this.

The truth is that The Boss Baby, while almost certainly much less of a film than The LEGO Batman Movie, isn’t terrible. It’s also, sadly, not that great. I’ll admit it comes with sort of a cute idea, but it’s taken to some really ridiculous places that don’t really work. It feels like it started with a good voice cast (and it is, top to bottom) and cobbled together a plot to use them. It wasn’t fully developed enough to avoid some pretty strange plot holes.

What we have is a man named Tim Templeton (Tobey Maguire as an adult; Miles Bakshi as a child) who is telling a story to his daughter. The story he relates is about his younger brother, Ted (Alec Baldwin). In Tim’s memory, Ted showed up one day in a taxi with the mind of an adult, something that his parents didn’t see. To them, the baby was completely normal in all respects despite his wearing a suit and having a watch.

The truth, we are told, is that the new baby is an executive at a corporation populated entirely by babies. They keep their youth thanks to a special formula they drink that allows them to function as adults but remain in the bodies of babies. The baby (he’s unnamed through most of the film, but I’m going to call him Ted for simplicity) reveals that he’s on a mission to find out what is currently happening in the world. See, there is only a certain amount of love available, according to our junior executive, and puppies are getting more than their fair share. His job is to figure out why, stop it, and return to the corporation where a promotion awaits.

And this is one of those places where I immediately lose the point of the film. According to The Boss Baby, puppies come from a factory run by a company called Puppy Co. As it happens, both of Tim’s parents (Jimmy Kimmel and Lisa Kudrow) work there. Puppy Co. is planning a major product launch, and Ted has shown up to find out what is going to happen. If the puppies get more of the love market share, no one will ever want a baby again. This is happening because the head of Puppy Co., Francis Francis (Steve Buscemi) is a former executive baby who somehow remembers his past (despite the fact that the babies who don’t have access to their formula start aging and forget their past). He was kicked out because he was lactose-intolerant, which made him start aging.

If you’re confused, you’re not alone. There’s a lot here that simply doesn’t make any sense, even with the willing suspension of disbelief that is often required of a movie designed to be entertaining for children. I mean, I'm willing to accept a karate-practicing panda and monsters that collect the screams of children. I’m willing to accept dragons with retractable teeth and video game characters moving from game to game. But a world that is set up to be at least nominally like the real world but where dogs come from a literal smokestack-having factory just doesn’t work for me. Another pain point here is our boss baby’s crew of neighbor kids who seem to possibly be company operatives, but also would seem to be actual babies born to those families. Or something. Like I said, there are some real story issues here.

There’s a lot that could be done with this premise, of course, and not enough was done with it. The plot holes could be overlooked if the rest of the film was good enough to cover it, but it’s really not. There are a few good jokes and I’ll admit that the ending is rather sweet. The sad fact, though, is that many of the jokes are essentially fart jokes. The best laughs come from things like Alec Baldwin saying, “Cookies are for closers.”

Look, The Boss Baby isn’t the worst animated movie nominated for this particular Oscar. It may well be the one that is least deserving for this year, but films like Brother Bear were certainly a lot less worthy of being in consideration for an Oscar. The Boss Baby is ultimately pretty harmless. It’s also just not that good.

Why to watch The Boss Baby: Good voice cast.
Why not to watch: The premise is taken to some pretty ridiculous places.

Posted by SJHoneywell at 4:59 PM