When Danger is Boring 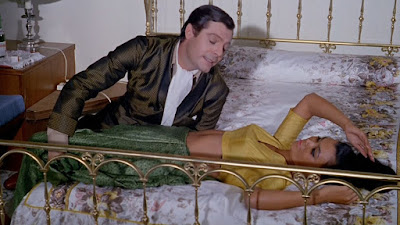 I really wanted to like Casanova 70. I really did. I think I can be forgiven for thinking that it would be in the same vein as films like Divorce, Italian Style and Marriage, Italian Style. After all, all three of these films are Italian sex comedies from the 1960s starring Marcello Mastroianni. Casanova 70, as the third in that trio, had to have what the others did, but more and better, right?

Actually, not so much. I realized pretty quickly that I had more or less seen this as a short a number of years ago. Woody Allen remade this as one of the scenarios in Everything You Always Wanted to Know about Sex. One of the vignettes in Allen’s film is about a woman who can only achieve an orgasm when she has sex in public. Allen plays the husband and has the entire thing filmed both in Italian and in the sort of style used for this film. It’s a direct nod to this sort of sex comedy, because in this film, Mastroianni’s character can only find himself interested in sex at all if there is a serious hint of danger involved. No danger, no sexy times.

I would love to tell you that there’s a great deal more to Casanova 70 than that, but there absolutely isn’t. Early in the film, NATO officer Major Andrea Rossi-Colombotti (Mastroianni) breaks into his girlfriend’s house in an attempt to seduce her. The fact that she has a gun only makes it more interesting for him. This leads him to a psychiatrist (Enrico Maria Salerno), who tells diagnoses him with this fascination for danger and tells him to seek other interests as well as platonic relationships.

The rest of the film is nothing more than Major Rossi-Colombotti attempting to have platonic relationships and instead finding ways to seduce women through danger. This includes entering a lion tamer’s cage, seducing the wife of his commanding officer, and impersonating a doctor to seduce a young woman hoping to avoid marriage while her family waits outside for his prognosis. These various episodes will also introduce us to Gigliola (Virna Lisi), who will prove to be the woman he most wants to be with and to whom he is nearly married several times. We also get a little vignette at the end where he is tried for murder of a man whose wife he is attempting to seduce.

That’s pretty much the entire film here. Andrea moves from place to place and looks for dangerous sex everywhere he goes. There are a few instances where it’s pretty clear that he is successful in consummating the relationship and a few where he clearly doesn’t. In one of the more amusing episodes, when he is back with Gigliola, she finally succumbs to his charms, but then tells him that since they are about to be married, everyone in the family knows that they’re going to have sex. Since there’s no danger for him, he can’t perform.

I’d love to tell you that there’s a lot of entertaining wackiness here, but there really isn’t. The problem that Casanova 70 can’t overcome is that it’s really misogynistic. Women are little more here than props, frequently virtually nameless, serving is nothing more than an object of conquest for Andrea. It also relies on the same joke over and over. While the details of a given scenario may well be different at certain points in the film, the actual thing that is happening is always the same. Andrea wants sex and needs danger, so he figures out a way to make the sex dangerous. Repeat in various places around Italy and with different women who, for all intents and purposes, are interchangeable.

Interestingly, IMDB lists Casanova 70 as both a drama and a comedy. I can’t for the life of me understand how the hell this thing is a drama. It’s not like Andrea’s problem with his sex drive is that serious or taken that seriously. Sure, he’s put on trial for murder at the end of the film, but the trial lasts less than 15 minutes. It’s too episodic and too tongue-in-cheek for it to build up any real drama, and while Andrea seems to take his libido problem seriously, the film certainly doesn’t treat it that way at all.

What’s left, then, is that this is a comedy, and that’s a problem. It’s a problem because Casanova 70 isn’t very funny. I was really bored with it quickly. Marcello Mastroianni is an engaging actor, and he’s especially good with good material. All Casanova 70 shows is that he’s not able to transcend dull material, try as he might.

Why to watch Casanova 70: Marcello Mastroianni is always a fine actor, even if the film isn’t that good.
Why not to watch: It’s not funny and comes across as really retrograde in its sexual politics.

Posted by SJHoneywell at 2:45 PM