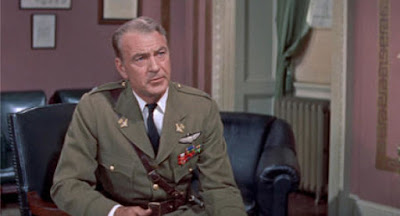 Casting a biopic is a weird thing. Do you cast for looks or the “essence” of the person? Or do you just go with a name and hope that everything works out? In the case of The Court-Martial of Billy Mitchell, the answer to these questions was evidently “none of the above.” Gary Cooper was cast as the title character in what Mitchell’s family believed to be a huge mistake. Where Cooper was tall and laconic, Mitchell by all accounts was short and fiery. Apparently, no one in Mitchell’s family thought this casting made any sense at all because the two men couldn’t have been more different.

Anyway, the title of the film tells you pretty much everything you need to know regarding the plot. Billy Mitchell (Cooper) is a staunch advocate for air power in the years following World War I. It’s Mitchell’s belief that air power is the future of the military and the future of warfare. No one else seems to believe him, though; both the Army and the Navy haven’t even pretended to throw a bone or two toward the fledgling air corps.

Keen to prove that air power is the key to the future, Mitchell is offered the chance to sink an ancient “unsinkable” German battleship. He does so, but only by defying orders. This gets him demoted and sent off to a base in Texas where it would seem he could no longer get into trouble. He’s given cause to act on behalf of air power once again following a pair of tragedies. In one, six planes from his former squadron go missing. The other involves the loss of an airship piloted by his friend Zack Lansdowne (Jack Lord). Mitchell reacts by calling a press conference and castigating the Army, initiating the court-martial.

These court proceedings take up the rest of the film. Needing whatever help he can get, Mitchell goes to his friend, Representative Frank Reid (Ralph Bellamy) to defend him. Once the trial begins, we learn exactly what the Army has planned for Mitchell. Essentially, all that is going to be allowed is testimony regarding whether or not he made the statements to the press that he did. Statements regarding the validity of his position—justification for what he did—will not be allowed. That’s until Frank Reid comes up with the brilliant tactic of getting in the testimony of someone the court dares not offend: Margaret Lansdowne (Elizabeth Montgomery), widow of Zack Lansdowne. Once the widow of a military hero testifies, the flood gates are open, and Mitchell and his team call forth a host of people encouraged to tell the truth of Mitchell’s complaints. The prosecution counters with the arrival of Major Allan Gullion (Rod Steiger), a prosecutorial killer, to drop a dime on Billy Mitchell. Interestingly, in this portion of the film, Billy Mitchell does a little predicting, suggesting that in the future Japan will attack both the Philippines and Pearl Harbor from the air. When you consider that the film takes place in 1925, that’s kind of scary.

So here’s the thing we’re left with: The Court-Martial of Billy Mitchell seems to be a relatively accurate portrayal of the events, at least as accurate as we’re going to get for 1955, starring someone who appears to be as far away from the real Billy Mitchell as we’re likely to get. Because of this, I’m in a strange position in terms of deciding what to think about the film. I expect a certain level of accuracy in my historical dramas, especially those that can be easily verified. Honestly, it’s a problem that crops up frequently in biopics in general.

The other issue I have here is that there isn’t a great deal to talk about. After the initial set up, The Court-Martial of Billy Mitchell becomes a courtroom drama, and it is virtually nothing else. Once the court-martial begins, the film takes place almost entirely inside the courtroom in question. And for a good percentage of this time, we’re treated with scenes of Gary Cooper looking on stoically as his case is decided. It’s not until the end where he is attacked by Major Gullion that he’s given a chance to really defend his position.

Honestly, for as much of a pain in the ass that this film was to find, I expected it to be a lot…more. More exciting, more damning, more something. It’s ultimately kind of a big “so what,” and of all of the Gary Cooper movies I’ve seen, it feels like the one that was the most just going through the motions. It’s not bad, but it’s certainly not that interesting. It’s a shame, considering the subject matter.

Why to watch The Court-Martial of Billy Mitchell: An important moment in American military history.
Why not to watch: Evidently, Gary Cooper could not have been further from the real Billy Mitchell.

Posted by SJHoneywell at 4:56 PM