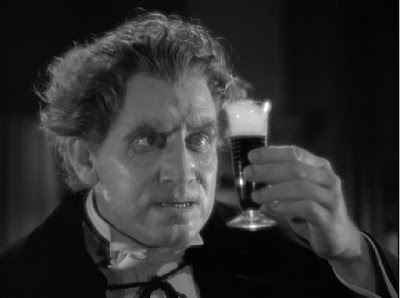 There’s something oddly reassuring to me about sliding into a film like the 1941 version of Dr. Jekyll and Mr. Hyde. I know what’s going to happen in general. I’ve read the story and seen the story depicted on the screen enough to be more than passing familiar with the basic run of events. The big switch here is seeing Spencer Tracy in the role of Dr. Henry Jekyll and Edward Hyde. Tracy was so often a warm, paternal presence on the screen that seeing him as a sadistic monster is surprising and kind of fascinating.

This is the pretty standard story with which you are almost certainly familiar. Dr. Henry Jekyll believes that both good and evil exist in every man. Through experimentation, he discovers a formula that more or less enhances his own evil side, which names itself Edward Hyde. When he drinks the formula, the mild-mannered, decent Jekyll becomes the brutish and sadistic Hyde, who more or less lives out the dark fantasies of the good doctor.

This version also creates a twisted love triangle, or, since we’re dealing with two personalities in a single body, a sort of weird quadrilateral. Jekyll is engaged to Beatrix Emery (Lana Turner) a match that is at least slightly frowned upon by her father (Donald Crisp). Hyde, though, has no real feelings for the prim and beautiful society girl, preferring instead the rough and tumble charms of Ivy Pearson (Ingrid Bergman). In fact, Hyde becomes so taken with Ivy that the gets her fired from her job as a barmaid and starts giving her money to keep her more or less as his sex slave. For her part, Ivy is terrorized by Hyde, unable to leave her apartment without his leave and forced to submit to his every terrible whim.

Eventually, Jekyll realizes what he is doing and how dangerous it is, so he destroys his remaining formula and sends money to Ivy anonymously. Unfortunately for Jekyll, the serum he has been drinking has done its work, and now he starts to transform into his evil alter-ego in times of stress. Where thi sis going is no surprise, of course. The noble Jekyll, realizing exactly what he is and the unpredictable nature of his new condition, breaks off his engagement with Beatrix. For his part, Hyde attempts to continue asserting his dominance over the trapped and tragic Ivy.

You know where this is going, right? The Hays Code required that all monsters had to die by the end of the final reel, so there’s no way that Hyde (and thus Jekyll) is going to make it to the end in a still-upright position. As the film winds up, Jekyll/Hyde finds himself painted into a smaller and smaller corner where any threat brings out the vicious Hyde and more and more people are closing in to stop his reign of terror.

Tracy is an interesting choice for the role because of the sort of roles he typically played. He was almost always a lot closer to being Jekyll on screen than he was Hyde. His version of Hyde is perhaps the most human of the ones that I have seen. There’s a different set to his jaw and some wildness in the eyes, but it’s clearly Spencer Tracy. It makes the transformation sequences comparatively dull when set side by side with other films loaded with transformations of one person into another. He just doesn’t change that much.

As it happens, I rather like Tracy in this role because half of the role plays so strongly against type for him. The presences of Lana Turner is interesting, but she’s not that interesting in the film. Beatrix is pretty and bland. Ivy has a lot more spirit, and Bergman is better in the film, but she also has a lot more to do. I’d have loved to have Donald Crisp have more to do here as well. Crisp is a great addition to just about any film of this era, and he’s always entertaining. He’s not in this enough to have much of an impact, though.

Truthfully, I like the version from nine years earlier with Fredric March better. The transformation is better, and the Hyde character is much more clearly monstrous, at least visually. Tracy’s Hyde is perhaps more sadistic and evil, but March looks the part so much more.

This is worth seeing for Tracy, and a little bit for Bergman. The rest of it is pretty easy to forget, though.