Films: The Morning After
Format: Internet video on the new internet machine. 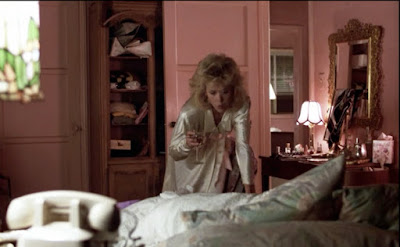 Jane Fonda is one of those actors I have to take on a case-by-case basis. She can be so good with good writing. With a film like Klute or They Shoot Horses, Don’t They?, she is the best thing on the screen. Then she does films like Monster-in-Law or Georgia Rule and you wonder which is the real Jane. I’ve always got my guard up a little with her, which leads us to The Morning After, which I found online.

Alexandra Sternbergen, aka Viveca Van Loren (Fonda) wakes up one morning with the hangover she’s grown accustomed to having. She’s a blackout drunk who has pissed away her acting career by climbing into a bottle every night. This morning, though, she has woken up in the apartment of a man she doesn’t know. That might be bad enough, but it’s not the whole story. The man is dead, and since he has a knife sticking out of his chest, it’s clear that this was no heart attack.

Alex is sure she didn’t do it, but because she has a violent past and a history of blackouts, she can’t be sure. Her hairdresser Jackie (Raul Julia), who also happens to be her estranged husband, tells her to go to the police, but she instead makes a run for it. Since it is Thanksgiving, though, she can’t go anywhere for cash and all of the flights out of town are booked. More or less by chance she ends up in the car of Turner Kendall (Jeff Bridges), a racist ex-cop. Eventually, and to the surprise of no one watching the film, he’s eventually going to find out about the body, believe her, and the two will become romantically linked.

As the film moves into the third act, we get a reveal that ruins the rest of the film. In fact, with the scant two paragraphs I’ve given you here, if I revealed this to you, you would guess about 90% of the ending. In truth, this hadn’t been a barn-burner of a film up to this point, and with the entire hand of cards revealed with a good 20 minutes still to go, it ends up as a huge disappointment.

In her prime, Jane Fonda was capable of playing compelling characters who were unpleasant; They Shoot Horses is a great example of this. She can’t quite pull it off here, although she tries pretty gamely. There are a couple of moments that work really well for her. One happens early in the film when she tries to get on a flight out of Los Angeles despite all of the flights being booked. She fakes a story about a child on the brink of death, and when she can’t get to San Francisco, she turns of the waterworks on a time and coldly asks for a flight to Vegas.

The second moment like this happens late in the film. Desperate to stay one step ahead of the police, she asks Jackie to dye her hair from the unnatural bleach blonde she sports through most of the film. He gives her back more or less her natural hair color, and seeing her observe herself with her natural hair, probably for the first time in a decade as the character, is a really wonderful moment. It’s very honest, and in that brief second, makes Alex/Viveca likable.

So, ultimately, Fonda is fine here, but nothing exceptional. The Morning After rather inexcusably becomes akin to an action thriller in the close of the story, and for a movie like this one, that’s almost unconscionable. While there are a couple of good jump moments in the film, this is a lukewarm thriller at best, especially paired with its dreamy, romantic soundtrack, which is one of the worst choices in the film. Viveca runs from the dead body in a strange apartment, and the soundtrack thinks we’re moments away from a couple meeting and sharing a quiet drink in the corner of a bar.

I’ll also give this a thumbs-up in the film’s favor. Unlike most of the films that pair an unlikely duo together, in this case, Fonda is a good dozen years older than Bridges. She was just shy of 50 in this film and Bridges was just into his later 30s, an age difference that we see all the time (and see doubled all the time) in the other direction. It’s honestly kind of refreshing.

But not a lot else here is. There are some nice directorial moments from Sidney Lumet. That’s not surprising, since Lumet is a capable and talented director. But the story is no better than average, and only gets to the point of average in places. The performances are fine, but nothing exceptional. In truth, there’s not a great deal to recommend The Morning After, although I’ve certainly seen worse films.

Why to watch The Morning After: Who doesn’t like a good murder mystery?
Why not to watch: It’s not that good of a murder mystery.

Posted by SJHoneywell at 1:35 PM