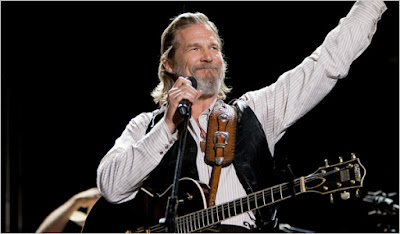 So it’s Oscar night and while I watch and live-tweet the awards (something I’ve literally never done before), I’m writing up Crazy Heart during the commercials. For a blog like this one that focuses on a few Oscar categories, tonight is akin to Super Bowl Sunday. I’m hoping that I’ll finish this before the end of the ceremony. Since I don’t care a great deal about the musical numbers, I might write through those as well.

Otis “Bad” Blake (Bridges) is currently on what passes for a tour for him. His once huge career as a country performer has slipped away from him. Now, he is “touring” the American southwest, driving by himself from place to place in an ancient truck. He’s playing small bars and bowling alleys backed up by local bands drafted into service for the night. His reputation has preceded him; his manager has alerted all of his venues to force him to pay cash for his alcohol.

At one of his stops, Bad is asked if he will do a favor his accompanying pianist. The pianist’s niece is a music journalist and would like an interview. While Bad is a bit of a bastard, he’s not a complete bastard, and he’s desperate enough for money that he needs whatever press he can get. The journalist turns out to be Jean Craddock, who looks a hell of a lot like Maggie Gyllenhaal. And, because this is a movie, romance eventually blooms between the two of them despite their vast differences, including the fact that she is evidently about half his age. Perhaps they bond over their previous failed marriages. Bad has been married at least four times, possibly five. Jean has been married as well and has a four-year-old son named Buddy (Jack Nation).

So of course there are going to be problems. Specifically, there are going to be a couple of problems that will drive the plot. One is that Bad is an alcoholic, and this is going to interfere in real ways with his relationship with Jean and with Buddy. The second is his relationship with Tommy Sweet (Colin Farrell), a country star (no, really—played by Colin Farrell) who started his career as one of Bad’s protégés. Tommy has become wildly successful while Bad’s career has faltered, and while he resents the guy whose career he started, Bad willingly suffers indignities at his hands because he is desperate for the money.

I’ll hand it to Crazy Heart in that it manages to go to a few new places in its third act. But it ends far too much in the way we’re supposed to want it to. We get about 90% of what we’d have gotten had a film like this been made 60 years ago. That’s a little disappointing. It ends much too sweetly. A far larger problem is the fact that Crazy Heart again dives into that world where for some reason we need to have a romance between a physical derelict of a man approaching 60 with a woman half his age. Yes, I’m going to go on a rant here.

Why is this still a thing? We find out in the film that Bad has a son he’s never met, and that son is roughly the same age as Jean, with whom he becomes romantically involved. I don’t understand why this is a thing. I don’t know why it was ever a thing, especially when the only time this has been done in reverse, it’s been done as comedy, like in Harold and Maude. I don’t know why this is a thing. It makes no sense to me why this is actually a thing in movies so often.

The best part of the film is the music, which is quite good. It’s impressive that both Bridges and Colin Farrell do their own singing. I’ve never been a huge Colin Farrell fan, but he’s decent here, or at least he doesn’t make me want to punch myself in the face. I also like that T Bone Burnett worked on the film as a producer and songwriter.

Look, Crazy Heart features some nice performances, particularly by Jeff Bridges. But the romance angle loses me completely. Replace Maggie Gyllenhaal with someone more age appropriate and make Buddy her grandson, and all of the plot points still work without the creepy romance thing happening.

Can we make that a thing?

Why to watch Crazy Heart: Holy shit, but the music is good!
Why not to watch: Why do we need another romance between a famous man and a woman thirty years his junior?