She's Got a Good Personality...or Two 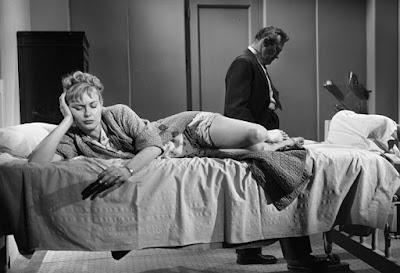 Posting this review today is something of a milestone for me. The full list of movies on my various Oscar lists runs a little more than 1400 total films. As of this point, with the posting of this review, I’ve hit the double-digit mark. There are 99 movies left unreviewed. It feels like I should have a couple of streamers or something, but there are still a dozen or so movies I’ll likely never get to see, so the celebration is admittedly a bit muted.

So, this is where we’re going to be for the length of this film: we’re going to be investigating the world of multiple personality disorder, specifically in the case of a woman who will be known to us as Eve White (Joanne Woodward). Naturally, she’ll have some other names, too. The first of these other personalities is Eve Black; the third is known eventually as Jane. The film purports itself to be based on reality, and is in fact based on a book. I have no idea how closely the film follows the text nor do I know how accurate that text is to any real case. I guess what we have to do is just assume that we’re at least in the reality ballpark.

Everything starts when Eve White complains fo headaches and blackouts where she loses a good amount of time. With treatment, she seems to improve, but relapses. This is noticed significantly when her husband (David Wayne) discovers hundreds of dollars’ worth of clothing and shoes having arrived at their house. Eve claims to know nothing about any of it, thinking that her husband had bought the items for her. Of course, the reality is that this is coming from Eve Black. This comes out when Eve White is analyzed by local shrink Doctor Curtis Luther (Lee J. Cobb) and Eve Black reveals herself.

Naturally, since multiple personalities are so rare, everyone thinks it’s an act initially, but the two Eves are clearly two different personalities. Where Eve White is meek and apologetic, Eve Black is brash and outgoing, and a bit of a temptress. This is very problematic for Eve’s husband, who doesn’t seem to understand the reality of Eve’s divergent personalities. Eventually, he does understand that there’s another woman in there, and he gives up, divorcing his wife. It’s not too long after this that we get the emergence of Jane, the third personality.

My problem with The Three Faces of Eve is the same problem I have listed on films like The Snake Pit: the ultimate resolution of Eve’s mental illness issues seems to be far too easy to be realistic. The goal with a multiple personality patient is to integrate the personalities into a unified whole. In this case, we want the two Eves and Jane to reach some acceptable point where oe personality holds sway and has all of the memories of all of the personalities. Here’s the thing (***Minor spoiler alert***), All of this seems too easy as well. What’s especially easy is that we more or less have two personalities vanish in the course of a conversation, providing us with that integrated overarching personality (***Spoiler over***).

That’s a problem for me because mental illnesses don’t tend to get magically fixed in that sort of “we’ve achieved a breakthrough” way that happens in movies. I think it sends a very dangerous message to people observing what is happening. It makes mental illnesses seem like things that can be solved with a quick pill or taking someone to a baseball game to cure depression. I think it’s wildly irresponsible to give people that idea when the reality is far more unforgiving.

Joanne Woodward was evidently mainly unknown in Hollywood at the time of this filming, and this was very much her coming out party—she won this Oscar for a portrayal that is incredibly sophisticated for a 27-year-old in only her third film. Woodward is absolutely captivating in the role, switching from one Eve to the other on command and making the two completely different people. Woodward sells these changes not just with her accent, but with her mannerisms and speech pattern, and even habitual gestures. It’s clear to the audience who she is at all times entirely through nonverbal communication.

That said, this is a movie that seems to be a bit less than the sum of its parts. Woodward is as good as she possibly could be in this role, and I love seeing Lee J. Cobb in a role that doesn’t have him constantly angry or clearly a criminal. Cobb was more versatile than he was given credit for being, and this film is a great example of that.

I guess I liked this well enough. The truth is that there’s not much here outside of Woodward and Cobb. This could use another half hour or at least 15 more minutes to delve deeper into Eve and what caused her various breaks with reality. As it is, we’re stuck with what we’ve got.

Why to watch The Three Faces of Eve: Joanne Woodward is at the top of her game.
Why not to watch: As with many an old movie that touches on this subject, the resolution seems too easy.