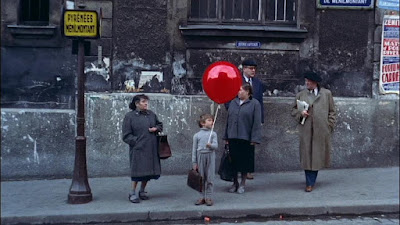 DVDs are a lot like sports officials and autocorrect in one important respect: we don’t really notice them until they screw up badly. As I get closer and closer to the end of these Oscar lists, I’ve discovered that, outside of last year’s nominations, there are a few spots where I still have a couple of movies in the same category and year to watch. I’m trying to get rid of those as much as I can. That’s why I requested The Red Balloon (or Le Ballon Rouge if you prefer) from NetFlix; I still had two 1956 nominees for Best Original Screenplay to watch. So imagine my frustration when about 10 minutes in the disc got stuck and started glitching. Fortunately for me, I found it streaming on Kanopy and finished watching it that way.

It would be fair to ask why, since I watched only 10 minutes off the DVD, I didn’t just say at the top that I watched this on Kanopy. Well, in many instances I would. In the case of The Red Balloon, though, watching 10 minutes approaches a third of the film’s running time. This runs under 35 minutes total. It remains the only short film to win an Oscar outside of the short film category. You read that right—this short film about a six-year-old boy being followed around Paris by a balloon won this Oscar despite having almost no dialogue and being shorter than an episode of Matlock.

Before I get into what is going to necessarily be a very short synopsis of the film, I should say that there’s no real way to discuss this at all without getting into the ending and what it might mean. Consider the rest of this review under a spoiler tag. If you haven’t seen this and don’t want to know what happens, best to turn around now. Still here? Okay, let’s forge ahead.

One day, young Pascal (Pascal Lamorisse, son of the director) discovers a helium-filled red balloon on his walk to school. He soon discovers that this red balloon is not what one might expect from a typical inanimate object. No, this balloon appears to have a mind and a will of its own. It follows Pascal around Paris, not needing to be held or tethered in any way. While the two begin to spend a great deal of time together, the balloon also causes some problems for Pascal. His grandmother will not allow it in her apartment. It gets him in trouble when, much like Mary’s little lamb, it follows him to school one day. It also follows him into church, an event that gets Pascal kicked to the curb (and who could complain about that?).

(Here comes the spoiler part.) Now, because children are fucking horrible, a bunch of older kids discover that Pascal has a magical, sentient balloon that follows him around. Because they are made of equal parts evil and wood ticks, they attack the balloon with slingshots, eventually wounding it to the point where it alights on the ground. At this point, one of the horrid little crotchmonkeys walks up to the balloon and stomps it to death. Jesus, children suck. Anyway, when this happens, all of the helium balloons in Paris suddenly become self-aware and fly to find Pascal, who is mourning over the latex corpse of his friend. They collect around him, and when he gathers them all together, they take him on an airborne tour of Paris. That sounds magical, but remember that this is a six-year-old child clutching a collection of slippery ribbons and dangling from them while soaring hundreds of feet above the ground. I know it’s supposed to be a special moment, but it’s actually pretty terrifying.

So that’s The Red Balloon. And really, it is kind of a magical story, but it’s right in line with the sort of coming of age stories we’ve been getting forever. Boys come of age when a beloved person, animal, or in this case thing dies. Girls come of age through sex. In a sense, boys undergo various rites of passage in movies. Girls undergo rites of passage by being one for someone else. Anyway, Pascal comes of age by finding out that the world is filled with a toxic awfulness and that everything that we love will eventually die. Even though he gets this magical (and, let me stress, terrifying) ending, his friend is still fucking dead.

There are those who believe that the death of the balloon followed by a spreading of its consciousness/spirit is a metaphor for Christ. I can see that, and it may well be what Albert Lamorisse (who wrote as well as directed this) intended. To me, coming out of post-war France with a landscape of grays and earth tones, it’s much more in the vein of existentialism. Whatever enjoyment we have, those literal bright spots in our lives, is temporary. The balloon certainly seems to symbolize this. In this world of tans and browns and grays, it is often the lone spot of color, the one thing that makes us realize that there’s life going on. And then it is destroyed.

And so it is a beautiful film. It’s something really special in that respect. I think I’m supposed to be uplifted by it, but in truth, I found it ultimately depressing. That can’t be good for a children’s movie, can it?

Why to watch The Red Balloon: It is a timeless classic almost by definition.
Why not to watch: Children are horrible.