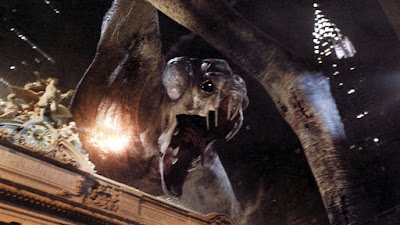 Life is short, so I really try to focus on watching movies I’ve never seen before as much as I can. Sure, I rewatch some, but I really do try to watch things that are new to me when I can. Some of my rewatches are to have something on in the background while I work. Some are because I have a desire to revisit a movie I like. Some, like Cloverfield, I rewatch for this blog. I didn’t love Cloverfield when I watched it the first time, but I didn’t hate it either. That said, it’s not like I was aching to see it again.

What I find interesting is that Cloverfield has spawned an odd collection of…not really sequels, but sort of related films. Cloverfield is a found-footage kaiju-style movie in which a huge monster attacks New York as in the best of the Japanese giant monster movies. 10 Cloverfield Lane, released a few years later, is related to the first film in that they seem to take place in the same world, but the style is completely different. A third film, The Cloverfield Paradox is just out this year; I haven’t seen it yet, but I assume that once again it will be mildly related to the original film without really being anything like it.

We have a few problems for me right off the bat with Cloverfield. The first is that it’s a found footage movie. I don’t specifically hate found footage, truth be told. I know it has a bad reputation, but I think it’s a completely legitimate way to tell a story. Movies like The Blair Witch Project and [●REC] and Chronicle draw a lot of their power from being filmed in this style. I’m fine with that. Where I have a problem is the motion sickness that these films like to inflict, specifically on me. Cloverfield is really bad in this respect when we get into the film itself. There’s a lot of wildly swinging camera, and I have to get up and walk around or risk hurling in my lap from the vertigo.

The second is that it feels to me like it takes too long to get going. Cloverfield is a spare 84 minutes or so, and it feels like it takes a really long time for anything related to the giant monster to show up. It’s almost as if the movie really wants to develop the personalities of people who are going to spend two solid acts just running away from stuff. I get it, but I’m not sure it works. The whole first act is there to establish a few characters. Rob (Michael Stahl-David) has taken a job in Japan, and his friends are having a going-away party for him. Among those in attendance are his brother Jason (Mike Vogel), Jason’s girlfriend/possible fiancée Lily (Jessica Lucas), their friend Hud (T.J. Miller), acquaintance Marlena (Lizzy Caplan), and Beth (Odette Yustman), who may or may not have had a serious relationship with Rob that is now ending because of his pending move.

What we learn in the first act is that Rob is leaving and that he had an ugly break up with Beth, who evidently slept with another guy. Hud, whose job at the party is to get testimonials from Rob’s friends on tape, instead starts gossiping with everyone about the fact that Beth had sex with a guy who wasn’t Rob. So that’s literally the opening. It’s a 20-something soap opera, and it takes too long to get going. While the full film does run about 84 minutes, there’s a good 11-12 minutes of credits at the end, and nothing really happens until the 18th minute. What this means is that a good 25% of the running time is this soap opera stuff and not a giant monster destroying New York.

And then there’s what appears to be an earthquake. But of course it’s not—it’s the emergence of a massive monster that starts destroying New York. The big moment here is when the head of the Statue of Liberty is knocked onto the street near our heroes. And, naturally, all hell breaks loose. The monster is truly huge, towering fifty stories or more. Worse, gangs of little creatures seem to rain off of its skin, each of these appearing to be larval forms of the monster. They are ravenously hungry, and for added fun, anyone bitten by one eventually starts bleeding profusely and then explodes.

Once all the shit goes down, Cloverfield becomes about reuniting Rob with Beth. Rob gets a call from her saying that she is trapped in her apartment, pinned under some rubble. He decides to go rescue her and everyone goes with him and we start losing people along the way. Eventually, the movie ends with the fates of most of our protagonists decided, and not any of them being that good. The coda is a short moment previously recorded of Rob and Beth

I know for a fact I’m going to catch some hell for something I’m about to say, but I’m going to say it anyway: the biggest problem with Cloverfield isn’t he swinging camera or even the slow start. The biggest problem is T.J. Miller, who is probably supposed to be funny and comes across as the guy who hangs around with you because you used to be friends and he hasn’t figured out that he’s annoying as hell. This is the guy who leaves the camera running while he’s telling people that his best friend’s girlfriend cheated on him on a tape that’s going to be handed to said friend. Seriously, what an asshole.

I don’t hate Cloverfield, but I don’t love it, either. I watched it years ago, and had no real desire to revisit it except the blog necessitated the rewatch. I can’t say it’s likely I’ll watch it a third time; there’s not enough here.

Why to watch Cloverfield: Great idea.
Why not to watch: Found-footage camera work and it takes too long to get going.