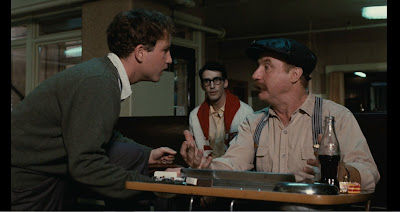 With the number of movies I need to watch dropped below100, I’m finding more and more movies that I simply have to watch if I’m going to continue at all. I’ve had a copy of The Apprenticeship of Duddy Kravitz sitting saved on a flashdrive for a couple of years without pulling the trigger. The reason is simple: I always have a little fear of those movies that feel like I’m going to be the only person who has ever seen it. I always find that so frustrating.

Anyway, The Apprenticeship of Duddy Kravitz is evidently the movie that forced Richard Dreyfuss to take the role of Hooper in Jaws. He was apparently so appalled by his performance in this that he figured his career was over and was desperate for any role he could get. I don’t think he’s all that bad in the film, but who am I to judge how someone sees him- or herself? Regardless, the fact that this movie and Jaws were in consecutive years is utterly fascinating to me, because it has caused me to realize something about Dreyfuss that I didn’t know before. The man is surprisingly adaptable to a role.

Dreyfuss was 27 when this movie was made and he’s playing a 19-year-old relatively believably. The next year, as Hooper, he’s more or less playing his age just as believably. That’s pretty interesting, or it demonstrates just how much difference growing a beard can make.

Anyway, David “Duddy” Kravitz (Dreyfuss, and Duddy rhymes with “goodie” not “buddy”) is just out of high school and wanting to do something with his life. His older brother Lennie (Alan Rosenthal) is in medical school, which makes him the favorite of father Max (Jack Warden) as well as Max’s brother Benjy (Joseph Wiseman). Duddy seems very much like the lesser child, considered to be a bit of a sap by everyone other than his grandfather (Zvee Scooler). His grandfather tells him that a man who has no land is nothing, and that is going to be a statement that drives the rest of the film.

The other thing that will drive the story is that Duddy has grown up with stories of the man his father calls the Boy Wonder , Jerry Dingleman (Henry Ramer), who started from nothing and became a man of means. With this in mind, Duddy takes a job at a resort as a waiter. Here he makes a constant effort to hustle as much as he can, something that puts him at odds with the other waiters more or less because he is seen as fulfilling the Jewish stereotype of constantly grubbing for money. As the season draws to a close and Duddy both loses and regains all of the money he’s made, his girlfriend Yvette (Micheline Lanctot) shows him a little-known nearby lake. Remembering his grandfather’s words, Duddy decides that he’s going to buy all of the land around the lake and develop it. And that’s going to be the rest of the movie.

Duddy’s quest to acquire the land takes him down some strange roads. This includes joining up with a blacklisted film director (Denholm Elliott) to film weddings and bar mitzvahs. It also includes purchasing illegal pinball machines from a guy named Virgil (Randy Quaid long before he went completely loopy), and desperately scrambling each time a piece of land around the lake comes up for sale.

What’s soon evident is that Duddy will do just about anything to get ahead. This means lying, scamming people whenever he thinks he can get away with it, and schmoozing whenever he feels it necessary. When his brother is threatened with being kicked out of medical school for performing an illegal abortion, it’s Duddy who saves his career. When he can’t come up with the money for Virgil’s pinball machines, he arranges to buy him a truck instead despite Virgil being an epileptic and thus unable to drive (and this becomes a problem as the film comes to a close). He abuses his relationship with Yvette, demanding everything of her and more or less using her for her name (to deal with people who won’t sell to a Jew) and for sex. He’s unpleasant because he is constantly on the make.

There’s a lot to like here, not the least of which is Richard Dreyfuss. He’s incredibly annoying in this film, and he’s supposed to be. While Dreyfuss has never been a backpfieffengesicht, he was either blessed or cursed with one of the most annoying giggles in Hollywood history. It’s in full force here, and it’s perfect for the role. Duddy is a shit, and whenever he’s even temporarily on top, it comes into play.

However, the movie is a series of episodes and there’s not a great deal of closure with a lot of what happens. Duddy deals with the film director, for instance, as a way to generate income to continue buying land around the lake. And then that just stops because the director has left and we don’t see him again. We don’t know that he’s planning anything—he just vanishes. When Duddy is a waiter, his nemesis is a rich kid named Irwin (Allan Kolman), who is a constant thorn in Duddy’s side for the start of the film until he just isn’t there anymore. We know he still exists, but he’s just gone from the film and gone from Duddy’s world. In a sense, I kind of like that—people like Irwin are speed bumps in Duddy’s rise to prominence. But I would like some closure.

What’s most interesting here is that The Apprenticeship of Duddy Kravitz touches on subjects like anti-Semitism without really being about that. Much of the way Duddy operates, for instance, comes from his being Jewish and acting preemptively in terms of how he thinks other people will react to him. But the film is really about the distances that someone will go do for what they perceive as success, and what that success might mean when it comes at such a huge cost.

Did I like it? Kinda. I’m not convinced it’s a great film, but it is an interesting one. It’s too detached emotionally for me to ever love it, but I think that might be intentional because that’s how Duddy comes across as well.

Why to watch The Apprenticeship of Duddy Kravitz: An interesting start to what would become Richard Dreyfuss’s career.
Why not to watch: Duddy is very much a person you don’t want to know.