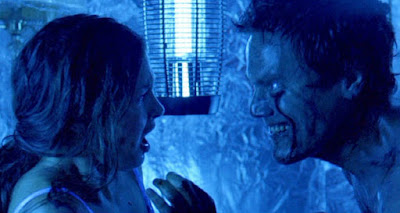 Bug is one of those movies that I think you either really appreciate or really don’t. At least that’s sort of my impression of it. It’s the sort of film that would have really strong advocates on the one hand and people who were either upset by it, hated it, or were at least mildly traumatized by it. It says a lot that this was based on a play written by Tracy Letts, who also wrote Killer Joe. That should give you some idea of the sensibilities.

Bug is a paranoid fever dream, the sort of film that starts out looking like a potentially strange little romance and increasingly becomes more and more deranged over time until it devolves into a full-blown shared schizophrenic hallucination. It also does something so subtle that I didn’t catch it the first time I saw it and didn’t really catch it this time until I was close to done watching. I really like it when a film turns out to be smarter than I thought it was.

We start with Agnes White (Ashley Judd), a server at a dive bar in the ass-end of Oklahoma. Agnes is evidently lonely; outside of her job, the only real social life she has is with her lesbian friend R.C. (Lynn Collins) who joins Agnes on booze-fueled cocaine binges. Of late, Agnes’s phone has been ringing with no one on the other end. Agnes assumes it is Jerry Goss (Harry Connick Jr.), her ex-husband who is due for parole.

One night, R.C. shows up with Peter Evans (Michael Shannon), who seems odd and claims to have recently been discharged from military service. Like Agnes, he is desperately lonely and the two eventually start to form a relationship. Peter claims that he was subjected to a number of biological tests run by the government while he was in the military, and that the harassment that Agnes has been experiencing is actually the government agents keeping tabs on him. Eventually, Agnes and Peter have sex, and shortly thereafter, Peter claim that their living space has become infested with aphids that are biting him.

None of Peter’s paranoia is helped by the return of Jerry Goss into Agnes’s life. As Peter spirals deeper and deeper into his belief that the room is infested with insects and that they are coming from him, implanted in him and feeding off his blood, Agnes becomes more and more convinced of his reality. Soon, the room is covered in flypaper and eventually tinfoil and illuminated only with bug zappers as both Peter and Agnes keep discovering bugs crawling on them and in them, biting them and breeding from them.

The genius of Bug, at least in my opinion, comes in how it deals with the idea of a narrator. Ostensibly, we’re watching the film from a third-person point of view, sort of the standard “I’m seeing what is happening” viewpoint that we expect in a movie. Toward the end of the film, Peter and Agnes are visited by Dr. Sweet (Brian F. O’Byrne) who claims to have been the doctor working with Peter in the past. And somewhere in the middle of his conversation with Agnes, there is a shift in how the conversation is working. Initially, he sounds and speaks exactly like a psychiatrist attempting to recover one of his patients. And then it changes. Suddenly it sounds like he is a part of a massive conspiracy, like everything that Peter has claimed about the government infecting him with bugs and planting egg sacs under his skin is the truth.

The brilliance of this is that suddenly we no longer have anything like a reliable narrator. We don’t know whose point of view we are using at any time. What we’re seeing could well be the reality of what is happening. It could also be what is happening merely in the mind of Agnes. We don’t know, and once this begins to be a real possibility—that what we’re seeing is completely detached from reality—we’re never given any real evidence of what is real and what is entirely in the heads of both Agnes and Peter.

I like Ashley Judd well enough, and this is probably her best work. There aren’t a lot of directors who can get Academy recognition for horror films, but William Friedkin is one, thanks to The Exorcist. It’s sad that this one seemed to slip between the cracks, because Judd’s manic performance is that believable and that good. Her descent into the darkness that Peter has brought with him is completely believable and terrifying. There is a moment near the end of the film where she becomes more or less the alpha in the bug fantasy she shares with Peter, where the narrative no longer becomes his but hers. It is terrifying, and one of the most gripping performances I have seen in a long time. This is not to downgrade Michael Shannon, who is Judd’s equal, getting to that extreme position first and dragging her along with him.

Bug is a hard film to recommend. There are a lot of people who won’t like it because of how dark and strange it gets and because it is so brutally unpleasant. I think it’s a work of genius, and Friedkin’s adaptation of it is nearly flawless.

Why to watch Bug: Few movies achieve this level of paranoia.
Why not to watch: It’s a scary friggin’ descent into madness.