Film: The Squid and the Whale
Format: DVD from personal collection on laptop. 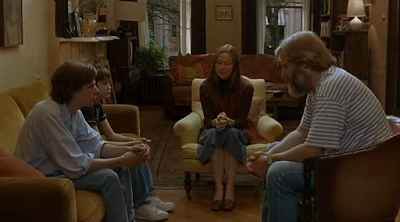 This is going to be painful. I’m a child of divorce and The Squid and the Whale is about divorce. It’s not just that, though. This is a movie that hits home for me in a lot of respects. The film is a mere 81 minutes long and it took me all day to get through because I needed to stop and process it. My parents’ divorce started when I was 15, so it was multiple decades ago, but The Squid and the Whale hit me very hard in a couple of places and erased those years very quickly. Not in a good way, but in a real way.

Bernard Berkman (Jeff Daniels) is a writer who once had some acclaim but hasn’t done a lot lately. He’s fallen more and more into his teaching and writes less and less, but has managed to maintain most of his most annoying and pretentious traits from his writing days. His wife Joan (Laura Linney) has just started writing and has been getting good reviews. Things are tense between the Berkmans, partly because of Joan’s recent success and partly because, as we lear a few minutes in, she has been a serial adulterer. The kids are Walt (Jesse Eisenberg) and Frank (Owen Kline). Frank clearly sides with his mom while Walt clearly favors his father in all things. When the parents separate and get joint custody, Walt eventually decides to cut off all contact with his mom and stay exclusively with his father.

While this is a story about a family falling apart on the surface, it’s much more a story about the two boys, and more specifically a story about Walt. It’s clear early on that Walt idolizes his father and wants to be as much like him as he can be. And slowly, over time, he starts to realize that maybe his father can be wrong sometimes, too.

As I said at the top, this was painful for me for a lot of reasons. I hated what my parents went through and it would be the furthest thing from the truth to suggest that this is for some sort of nobler reason. I wish that was the case because it damn near broke me. I still don’t have a lot of memory from my sophomore year in high school. I can’t tell you a single event from that school year that goes anywhere even remotely specific.

This is the film’s biggest strength. The Squid and the Whale is about making this process and these events as real as they can be for the audience. Again, while we see this through the eyes of everyone, it’s primarily through those of Walt and Frank, and especially Walt. Walt has picked up his father’s mannerisms, his pretentiousness, and his sense of entitlement. For Walt, the world needs to work in a very specific way and it doesn’t. He feels betrayed by this reality, going so far as to performing at his school’s talent show and claiming to have written a song that he didn’t. Just like his father is far more accomplished in his mind than in reality, Walt is far more accomplished in his fantasy world than in the real one. That need for attention is compensating for his desperate pain and frustration in his family life.

I’m not going to get into a full discussion of my parents’ divorce here. Suffice it to say that at one point, years later, in fact, I had the same sort of epiphany that Walt does, although the parental roles were reversed for me.

Is this good? It is, but it is also harrowing. IMDB lists this as both a drama and a comedy, and while there are clearly moments here that are meant to be funny, I didn’t find it so. It’s too close to the reality for me for it to be anything other than a drama with realistic bits of humor thrown in to keep it far more human and realistic.

We all have things that affect us in different, unexpected ways. I’ve watched a lot of movies about divorced people and never felt much need to bring up my parents. This one gets me there. I respect it for that, but there’s no way this is going to be a pleasant film for me, ever.

Why to watch The Squid and the Whale: The performances are solid.
Why not to watch: It’s painful and filled with an intense pretentiousness in the characters.

Email ThisBlogThis!Share to TwitterShare to FacebookShare to Pinterest
Labels: Best Original Screenplay, drama, Noah Baumbach, The Squid and the Whale