Film: The Champ
Format: DVD from NetFlix on The New Portable. 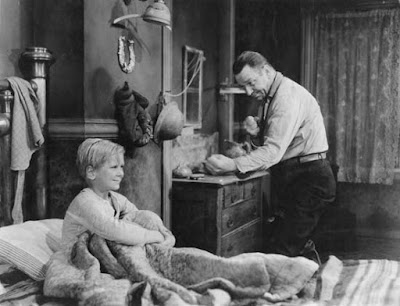 I’ve said before that Oscar seems to be obsessed with boxing more than any other sport. While there are sports elements in many an Oscar nominee and Oscar winner, there are three Best Picture winners that have a significant sports element (and despite the football and ping pong elements in Forrest Gump, it’s clearly not a sports movie) and two of them have to do with boxing. So it’s not really that shocking that as I come close to closing out both the Best Picture and Best Director categories, there’s yet another boxing movie to get through. That would be The Champ, from 1931.

As befits its status as an early talkie, we’re going to be diving deeply into melodrama here. It seems like a requirement of most movies of the era to have a massive dollop of melodrama tossed in, likely a hangover from the silent era when everything had to be significantly overacted to resonate on the screen. Also, it’s worth noting that for a movie about boxing, there’s not going to be a huge amount of actual boxing that happens here (and the boxing that does happen is very clearly terrible).

Andy Purcell (Wallace Beery) is a has-been boxer who was once the world heavyweight champion. He’s fallen on hard times, though, much of which seems to be of his own doing thanks to both his constant drinking and his addiction to gambling. Andy lives with his son Dink (Jackie Cooper), who refers to his father as Champ almost exclusively. In a clear display of just how different the world has become, Dink doesn’t go to school, but hangs around with his father, who seems to be possibly training for another fight, but maybe not. He appears to be attempting to get into shape, something that tends to be torpedoed by his constant boozing.

A string of luck at gambling makes Andy and Dink flush for a short period. Andy buys his son a horse that they dub Little Champ, and enter into a race. It’s here that we get our first main plot point. At the race, we encounter Linda (Irene Rich), who also has a horse in the race. Linda’s husband Tony (Hale Hamilton) sees Andy with Dink, though, and realizes the truth. Linda, it turns out, is Andy’s ex-wife who married him when he was at the top of the fight game, and Dink is her child that he somehow got custody for. No matter—she wants to change that because Andy is clearly a bad influence on the boy. This comes to a head when, in rapid succession, Andy loses Dink’s horse in a craps game, borrows money to get the horse back, and then loses that money gambling and gets arrested for fighting.

All of this is to set up the final act, where Andy has finally gotten his act together. He’s stopped drinking and gambling and is preparing for a real fight. Before the fight, we’re told that Andy has a weak heart, and if you can’t see where that particular plot point is going to take us, well, you need to watch more older movies. Then the fight happens and the end rolls out exactly as you expected it to before “The End” pops up. Like I said, it’s a melodrama and I’m not sure how to get away from that. There are some things to like about The Champ. I’m not and have never been much of a Wallace Beery fan, but he’s fine in this overall. I’m much more impressed with the young Jackie Cooper, who, at the tender age of eight or nine, acts pretty much everyone else off the screen. Cooper’s character is the most interesting one here for a lot of reasons. Cooper needs to be believable as a kid, and also to be both constantly hopeful that the Champ will live up to his word about drinking and gambling and be constantly disappointed and a little broken when once again his father fails.

This is incredibly melodramatic. If you needed any sort of indication of just how much this is going to live in that world, you don’t need to look past the fact that Andy finally conquers both his drinking and his gambling addictions by force of will after failing over and over again. Why? Because he finally needs his son to really believe in him one last time. You can feel the music swelling, can’t you?

While all of this is true, The Champ isn’t a terrible movie. It’s perhaps too predictable and follows exactly the story you think it will. Some of it flat out doesn’t make sense, like Linda and Andy being a couple at any point. He’s clearly a guy who has punched everything that has ever stood in his way while she drips money and early talkie dignity and class. And the boxing, when we finally get to it, is terrible and much of it is clearly and obviously speeded up.

\ For what it is, though, it’s a fine movie. It has a lot of the problems of early talkies in great depth, of course, but it’s earnest, and that pays for a lot of sins.

Why to watch The Champ: Jackie Cooper was a good child actor.
Why not to watch: The melodrama comes at you in waves.