Art on the Screen 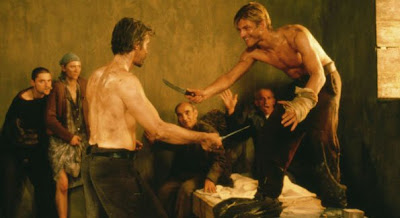 The biopic is sort of its own thing in the movies, and when the subject of the biopic is an artist, I’m never quite sure what to expect from it. I have some not-so-fond memories of The Color of Pomegranates as being something that tried to film the interior life of poet Sayat Nova, and the bulk of that film went so far over my head that it looked like a passing aircraft. So I’d be lying if I said I went into Caravaggio without any trepidation.

Fortunately, while this film ranks high on the artistic scale, it is not an art film per se. Like many a biopic, it starts at the end, with the title character, Renaissance painter Michelangelo Caravaggio (Noam Almaz as a boy, Dexter Fletcher as a youth, and ultimately Nigel Terry as the adult painter) on his death bed, dying in exile of lead poisoning. As he dies, card for by Jerusaleme (Spencer Leigh), his deaf mute companion, he reflects on the major events of his life.

As an adult, Caravaggio is still living under the Cardinal’s tutelage and working for him essentially working for him as a beneficiary of his patronage. This causes some resentment among others. Part of that is because Caravaggio is frequently depicted as drinking to excess and fighting. Part of that is because it is heavily implied that he has sexy time with both his female and male painting models, including Jerusaleme and Pipa (Dawn Archibald), a female contortionist. Things intensify when he brings in Ranuccio (Sean Bean) and his lover Lena (Tilda Swinton in her screen debut). Caravaggio, naturally, is attracted to both.

And everything changes again when Lena claims to be pregnant and that she will become the lover of Scipione Borghese (Robbie Coltrane). And then, of course, she turns up dead. What happens after that is best left unsaid in a review, since it’s really the ultimate point of the film. I’m not even going to put this under a spoiler tag, because the film is pretty enough that you should watch it for yourself. I’ll just say this—if you’re a fan of Sean Bean and know his track record for his film characters, you won’t be shocked at what happens here.

No, really. The plot/history/biography of Michelangelo Caravaggio is interesting, and the overt hints at child molestation and bisexuality were certainly approaching shocking in the early-AIDS days of 1986. And certainly the child molestation angle is still disturbing (if no longer as shocking, particularly with it coming from a priest), but except for the extreme religious right, bisexuality and homosexuality no longer has the shock value it once did. So don’t be prepared to be shocked to your socks by this one the way you might have back in the middle of the Reagan years. Even the not-so-subtle hinting at the homosexuality of whatever Pope was sitting in the Vatican at the time doesn’t do much but elicit a shrug. Not even a raised eyebrow.

What’s worth talking about here instead is just how damn pretty this film is. It’s art directed all to hell and there are a significant number of deliberate anachronisms throughout. For instance, the characters all wear modern clothing instead of clothing from the actual time period. One room is lit with electric lights, and in one scene, a character uses a small pocket calculator. These are deliberate, and are a connection to Caravaggio’s actual artwork; he had a tendency to paint biblical scenes in clothing of his own period instead of the more classical attire. These things are not specifically intended to be hidden per se, but are so neatly and beautifully slid into the film that they become natural rather than jarring.

So really, that’s it. The story is good an interesting, but not really anything you haven’t seen before if you’ve seen a decent and relatively accurate attempt at a biopic. The real reason to watch this film is just to look at the way the story unfolds on the screen. It is a beautiful film to watch because of the richness of the set design and the costuming.

For art fans, there’s a nice little addition to the film. The stories of some of Caravaggio’s greatest paintings are told through the course of the film. Are these historically accurate? I don’t know, and I don’t honestly care that much. It’s a nice addition to the film, though, and is something else to latch onto if you lose interest in looking at something that looks like it belongs in an art museum.

Why to watch Caravaggio: It is filmed as beautifully as anything I’ve ever seen.
Why not to watch: If you’re homophobic, you’ll have some issues here.
Posted by SJHoneywell at 10:58 PM