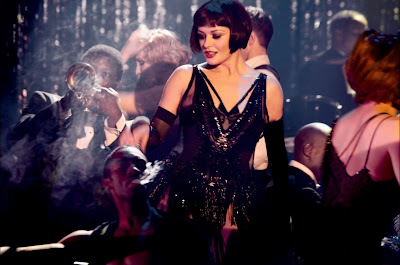 I will freely admit that I went into Chicago prepared to hate it. It seemed to me to be a distillation of everything I dislike in a movie sort of all at once. I already have problems with musicals, and Chicago features Renee Zellwegger (aka LemonFace), an actress I tend to dislike on sight. In fact, I blame her for duckface pictures. And yes, “hate” is a strong word, but as this blog sometimes shows, I’ve never been afraid of a strong opinion.

As it turns out, I didn’t hate Chicago, but I also didn’t like it very much. Before I get to the specific reasons why, let’s talk story.

Roxie Hart (Renee Zellwegger) is married to Amos (John C. Reilly), a working class schlub. While he works as a mechanic, she’s off making the beast with two backs with furniture salesman Fred Casely (Dominic West). Part of that is, for her, because it’s more fun than waiting around for her sadsack husband and part of that is because Fred claims to have connections in Vaudeville. One night, they see Velma Kelly (Catherine Zeta Jones) perform just before Velma is arrested for killing her husband and sister since she caught the pair also making the beast with two backs. Not too long after this, Fred dumps Roxie and she retaliates by shooting him. Amos takes the rap until he discovers that she was cheating, and he sends her off to the big house.

In prison, Roxie meets Velma, and the two dislike each other immediately. She also encounters Mama Morton (Queen Latifah), the prison matron who can get anything for a price. She introduces Roxie to Billy Flynn (Richard Gere), a high-priced criminal lawyer who has never lost a case for a female client. He accepts Roxie’s case, putting Velma on the backburner, causing more bad blood between the pair.

Eventually, Roxie’s case goes to trial (she keeps her name in the papers by faking a pregnancy), Velma cuts a deal to get Roxie convicted, Amos gets screwed out of everything, Billy makes money, and the film ends with Velma and Roxie performing on stage as a duo, out and proud of having committed their crimes. After all, that’s Chicago.

So let’s talk good and bad here. I’ve mentioned above that I dislike Renee Zellwegger intensely, and that’s something difficult to get beyond. She’s not terrible here, but I still don’t like her very much. She’s a score in the negative column. In the positive column, though, is Queen Latifah. I don’t care how many accolades she gets as an actress, the woman is underrated. Her big number is one of the best ones in the film both because she’s got the pipes to pull it off and because she has the sex appeal to really work it. Also on the positive side is the fact that Rob Marshall trusted his cast to sing for themselves. It works in the case of John C. Reilly’s rendition of “Mr. Cellophane.” It doesn’t work so much when it comes to Richard Gere. He tries, but he’s not quite there. (I’m aware that many people may say the same thing of John C. Reilly, but it worked for me.)

Also to the positive here is the way the film is staged. We get a blend of numbers that function both to drive the story and give us insight into the characters, but also work as fantasy, as a behind-the-eyeballs look at what characters are thinking. When Amos confesses, for instance, we see Roxie singing a number about how much she loves her husband and how great he is to her. This shifts immediately when he discovers the truth. The singing here is essentially in her head—her costuming changes to that of a singer on stage, and the performance is on stage as well, and when the number ends, she’s back in the scene in the apartment in the clothes she had been wearing. The musical number is essentially what’s going on in her head rather than what’s going on in reality. It’s a neat mixture of diegetic and non-diegetic information—what’s real for us as the audience is not real for the characters on screen. This happens multiple times, to best effect with Mama Morton’s sexually-charged prison song, and again when the other female prisoners confess their crimes.

This, more than anything, is the biggest positive for this film. The staging of the film is incredibly inventive and beautiful to watch. “We Both Reached for the Gun,” for instance, is a film highpoint, with Roxie sitting on Billy’s lap as a ventriloquist dummy and the reporters shown on puppet strings pulled by Billy to get the press he wants. It’s the sort of thing that makes the movie version of any stage production viable—the way this is depicted in the film would be impossible on stage, but there is very much a sense of the stage here—it’s a near perfect mix of live theater and technical film wizardry.

If this is the high point, though, the low point is the characters themselves. With the single exception of Amos Hart, these characters are terrible people. Roxie Hart is a slut, offering sex to virtually anyone and anything that can get her ahead. She’s selfish, conceited, and willing to step on anyone and anything to get ahead. It’s a statement that could be made of about 90% of the characters in the film, in fact. These people—Roxie Hart, Velma Kelly, Billy Flynn—are sociopaths. To get Roxie off, Billy Flynn manipulates evidence, panders to the jury, has his client commit perjury, and destroys the career of the district attorney. Why would I root for this guy? Why would anyone want me to be happy when Roxie gets everything she wants? She’s a terrible human being.

And ultimately, that kills my opinion of the film. The characters are narcissists and sociopaths, guilty of awful acts and proud of having done them. Chicago is visually dazzling (often with skimpy, sexy costumes), but morally reprehensible. I can’t get past that.

Why to watch Chicago: More flesh per square inch than you’d expect.
Why not to watch: Bad behavior is not just rewarded, but lauded.
Posted by SJHoneywell at 12:58 PM