A Different Sort of Drug 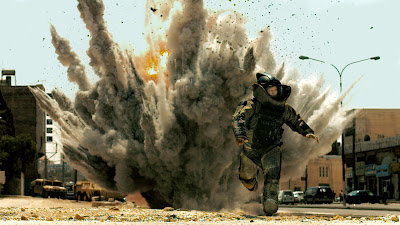 About a year ago, one of my students asked me if I had seen The Hurt Locker yet. I hadn’t at the time and he told me that I shouldn’t bother. According to him, the film did not accurately depict his experiences in Iraq. Then again, one of my current students actually was a bomb disposal expert in Iraq, and he says the film is the real deal. Since I’ve never been in the military or been anywhere close to an active war zone, I can’t really speak to the realism of the film; I can only discuss it as a movie.

What we have is less a plot than a series of intense events that lead us to a particular place. In a sense, the film is a character study of one man in particular, but also of a personality type—a look at a genotype of soldier.

We start with a bomb disposal squad consisting of three men. Sergeant Sanborn (Anthony Mackie) has the important job of communicating with the man on the site of actually disposing of IED (improvised explosive devices) and providing cover. Sanborn is by-the-book and based on his line of work, doesn’t like mavericks or surprises. Also providing cover is Specialist Owen Eldridge (Brian Geraghty), a nervous guy who frequently second- and third-guesses everything he does. These two are lead by Staff Sergeant Matt Thompson (Guy Pearce) who has the same sort of attitude in life as Sanborn. In the first bomb disposal we witness, Thompson is killed by a phone-detonated bomb, a death that Eldridge blames himself for, since he was in a position to shoot the bomber.

Enter Sergeant First Class William James (Jeremy Renner) who is everything that Sanborn hates. He is wild and reckless, taking chances simply to take them and unwilling to leave a zone with a known bomb in it despite the risks to himself and his team. He clashes with his team, particularly Sanborn, but he’s also very good at defusing and detonating enemy ordnance. This fact alone is what keeps him alive when Sanborn has the chance to literally frag James at one point.

What we see are snapshots of the last month of the team’s tour in Iraq. We see them go out on several bomb disposal missions, each one more dangerous and touchy than the last. It soon becomes evident that James isn’t specifically reckless, but more or less addicted to the adrenaline of life in Iraq. He collects pieces from the bombs he dismantles, for instance, because he enjoys looking at and holding things that could have killed him and failed. He continues to take risks that put him in danger, and more seriously, put the lives of everyone around him in danger, a fact that Sanborn especially takes issue with. Eldridge worries, but is more concerned with his own inability to pull the trigger when it needs to be pulled.

One of the many times things come to a head is when the team goes out on a mission with Colonel John Cambridge (Christian Camargo) in two. Cambridge frequently speaks with Eldridge to help him over his problems and guilt, and when Cabridge is killed by an IED, Eldridge feels additional guilt. Eldridge is later wounded when James leads the team on a mission and exceeds their authority.

The entire point of the film, everything that we as the audience are to get from the film, can be summed up in the opening moments before the film really starts. The film begins with a quote from New York Times correspondent Chris Hedges: “The rush of battle is a potent and often lethal addiction, for war is a drug.” The quote fades, but leaves the last four words. War, then, is the drug of choice for Sergeant First Class James.

And really, what we see is his addiction. We see him in the moment, defusing bombs and in the moments just after, and it is very much like he has injected himself with the best thing in the world. Then, later, after the drug wears off, there’s nothing left for him until the next mission.

What impresses me the most about this film is the near constant level of tension. We spend all but a spare couple of minutes near the end in Iraq, and most of that we spend in the field on missions with the team. There is very little time spent anywhere safe, and in many respects we experience the same level of adrenaline that James finds himself addicted to. It’s incredibly effective and intense, never really giving us a let up until those moments at the end following yet another close call and the end of the rotation for James and Sanborn.

I have to say I’ve always liked Kathryn Bigelow as a filmmaker. I love Near Dark and Strange Days, and I certainly know more than a few people with a soft spot for Point Break. I can even see elements of those films in this one. But The Hurt Locker is Bigelow’s move into the real big time, her entry into not just films that are exciting and fun, but films that are truly meaningful and artistic, films that have something to say more than action and stunts. It doesn’t surprise me that this film is as lauded as it is.

Why to watch The Hurt Locker: It actually matches the tension of the film La Salaire de la Peur.
Why not to watch: Depending on which veteran you ask, your realism may vary.
Posted by SJHoneywell at 2:06 PM