The Adventures of Robin Hood has a unique distinction. It’s safe to say that almost everyone knows the story, but virtually no one has actually read the book. I know that saying this will probably mean that I’ll get at least one comment from someone who will claim to have read the book. Yeah. Good for you. That’s why the word “virtually” is in the sentence above—I’ve been writing long enough that I can cover my bases. 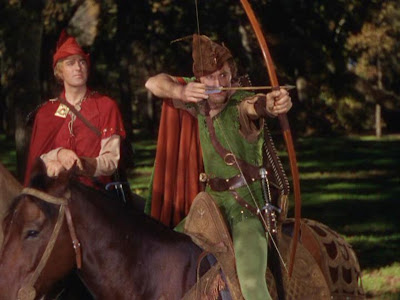 Anyway, you hear the words “Robin Hood,” and unless you have lived under a barrel your entire life, you don’t think of Kevin Costner or Cary Elwes or Russell Crowe. The quintessential Robin Hood is Errol Flynn in The Adventures of Robin Hood. Even if you haven’t seen it, you still know the basic story. But, just in case you do call that barrel home, here it is in a nutshell.

King Richard the Lion-Heart (Ian Hunter) has been captured in the crusades and the throne usurped by his brother John (Claude Rains). Working with Prince John are Sir Guy of Gisbourne (Basil Rathbone) and the High Sheriff of Nottingham (Melville Cooper). Robin of Locksley, a.k.a. Robin Hood (Flynn) rebels and gathers a group of men in Sherwood Forest and fights oppression. His main go-to guys are Will Scarlett (Patric Knowles), Little John (Alan Hale) and Friar Tuck (the always magnificent Eugene Pallette). Robin fights for the true king, to free the Saxon people, and for the love of the beautiful Marian (Olivia de Havilland). We’ve also got a couple of comic relief characters, specifically Much (Herbert Mundin), who is saved at the start of the film by Robin and Will and Bess (Una O’Connor), Maid Marian’s handmaiden.

Okay, so you know the basic story, and that story is a classic. There’s another reason to watch this film, though. The Adventures of Robin Hood has the true classic Robin Hood scenes that are either referenced, spoofed, or remade in other versions of the film. We have, for instance, Robin’s entrance into the feast with a deer across his back and his daring, swashbuckling escape. We have the quarterstaff fight with Little John on the bridge. There is the meeting with Friar Tuck, the archery tournament, and his daring escape from the gallows. Oh, it’s all here because all of it started here.

Y’know what? I could be a cynical bastard and talk trash about this film, but I’m not going to. I really enjoy the hell out of this film because it’s a tremendous amount of fun. It’s Errol Flynn playing Robin Hood as a swashbuckling pirate, which has made Robin Hood a swashbuckling pirate in the minds of virtually everyone. Flynn plays the role with decided relish. He’s having a good time swinging a sword around and firing arrows and climbing ropes, and who can blame him? It’s the very thing that made him famous, and this time he gets to do it in Technicolor.

The film also benefits from a tremendous supporting cast for Flynn’s antics. We can start with Olivia de Havilland and we could just as easily end there because she’d be enough. Fortunately we don’t have to end there, though. We also have Basil Rathbone and Claude Goddam Rains as our main bad guys. I also have a soft spot for Una O’Connor, who frequently played this sort of shrill comedic harpy. And Eugene Pallette, who could do no wrong as far as I'm concerned.

The Adventures of Robin Hood is fun. It’s melodramatic and overacted, and it’s also great fun and completely entertaining. The ending is a foregone conclusion, of course. There’s no real possibility that Robin will swing from a noose or that the bad guys won’t get what’s coming to them. There’s no chance that Robin and Marian won’t end up together (and on a similar note, no chance that Bess and Much won’t end up together, either). We know this going in because it’s a film from 1938 and that’s the way films worked back then. We know we’ll get the Hollywood ending and the good guys will be triumphant because nothing really bad is going to happen to all of the characters that we like. And we watch anyway because it’s just so damnably fun and worth watching.

So yeah, I like this movie a lot. There’s a real sense of boyhood adventure in this film that is impossible for me to get past, and so I no longer try. I just enjoy it for the spectacle that it is. You should, too.

Why to watch The Adventures of Robin Hood: Errol Flynn was never better and because there’s swords and arrows and stuff.
Why not to watch: Because you already know the story.
Posted by SJHoneywell at 11:51 PM