Film: It Happened One Night
Format: DVD from personal collection on rockin’ flatscreen. 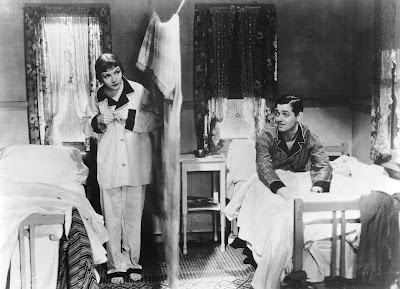 A day after the Hugo/The Artist hoopla party also known as the 84th Academy Awards, I thought it might be appropriate to return to a simpler time and take a look at the first film to win the Big 4: Best Picture, Best Director, Best Actor, and Best Actress. The film is It Happened One Night, a thrown-together screwball comedy that influenced popular culture in a number of ways. Like a number of other great movies, this one was considered a dog by everyone involved. In fact, legend has it that Claudette Colbert was only coaxed into her role by being paid double her normal rate and being promised that the shoot would only take four weeks.

Regardless, the set up is a classic for the genre, one that has been around forever. All we need to make the true screwball romance work is to have two people meet cute, hate each other, and then fall for each other by being forced together. It doesn’t hurt if one of them is staggeringly wealthy while the other is not—in the 1930s, that was how you made sure that you got an “opposites attract” vibe from your characters.

In this case, the rich one is Ellie Andrews (Colbert), a society girl who has married a playboy aviator named King Westley (Jameson Thomas). Rather than get an annulment, she takes a swan dive off her father’s yacht and swims to shore, determined to get to New York and meet up with her new husband. At the same time, Peter Warne (Clark Gable) is, depending on which side you ask, either quitting his job or being fired as a newspaper man. He’s also headed back to New York. Naturally, our two stars wind up on the same bus fighting over the same seat.

So now things get interesting. There’s a reward for the whereabouts of Ellie Andrews, a sizable $10,000 put up by her father (Walter Connolly) for her safe return. Peter knows this immediately—he’s aware of exactly who she is, but he’s not interested in the reward. Like any good newspaper man, employed or otherwise, his idea is to travel with her and get a story out of her that he can sell to the highest bidder. And so, they travel together, sharing motel rooms (scandalous for the time!) and posing as a married couple (equally scandalous!). Naturally, she complains endlessly and can’t seem to get the hang of not having any cash. He complains endlessly about the fact that she’s spoiled rotten. And naturally, the two fall for each other, but can’t admit it, requiring the intervention of her father and the paid compliance of King Westley for our couple to ride off happily together.

What? No spoiler alert? C’mon, it’s a romantic comedy. There’s no other way it could end.

As a screwball comedy, though, it’s not very screwball. Our two main characters dislike each other only slightly, and not for very long. It’s pretty quickly that they’re at least chummy with each other, and not too long after that when she professes undying love for him. It’s also interesting to note that in spite of the title, the film takes place over at least three nights—there are three different occasions in which our star-crossed couple beds down for the evening.

Essentially, screwball comedies changed quite a bit after this film, as did romantic comedies. There isn’t a great deal of tension between the two characters. After their first day, for instance, it’s pretty evident that they’re starting to like one another. Oh, they still give each other a difficult time about things and tease each other, but it loses the edge of malice after the first day. Really, the only tension that happens after that first night is the fact that she’s still a spoiled little rich girl and that she thinks at one point that he’s abandoned her.

But let’s talk about cultural impact. It’s a well-established fact that Bugs Bunny was based in no small part on Clark Gable’s character in this film. In fact, it’s Gable gnawing on a carrot and speaking at the same time that served as one of the cartoon standby’s greatest trademarks. Additionally, on their first night together, Gable partially disrobes and reveals that he’s not wearing an undershirt. Reportedly, sales of undershirts plummeted across the country. As Gable does, so do the masses, evidently.

I’m not as well-versed in 1934 as I probably should be, but I’ve seen several of the nominated films from that year. For my money, a good number of the awards, particularly the one for screenplay and possibly actor should have gone to The Thin Man instead. The dialogue is better for one thing. This isn’t to take away from It Happened One Night, but it’s simply the truth as I see it. I’ll take the saucy and sauced detective over the Reporter McDrinksalot and Snooty McWhitegirl every single time. Okay, yeah, that’s being unfair.

Why to watch It Happened One Night: It’s the progenitor of the ‘30s screwball rom-com.
Why not to watch: It’s still a rom-com, regardless of its impact.
Posted by SJHoneywell at 9:51 PM