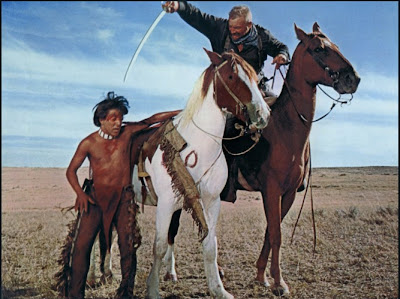 For whatever reason, there are some films that I just have trouble getting through. Little Big Man is one of those movies. I don’t have a reason for it. I’ve checked it out of the library probably four times and in fact had to renew it last week because I just couldn’t get myself to put it in the DVD player. So I finally did if for no other reason than that I could finally stop checking the damn thing out of the library.

We meet Jack Crabb (Dustin Hoffman) at the tender age of 121 as he is being interviewed about what the Native Americans were like. He immediately turns the conversation to the topic that he wants to talk about. Crabb claims that he is the only white survivor of the slaughter at Little Big Horn, and essentially decides to tell that story. Of course, he’s not going to simply jump into that story; he’s going to start at the beginning and take most of two hours to get us to that part of the story at the end.

We go back 111 years to when Jack was a mere 10 years old and moving west with his family. His family is attacked by the Pawnee and wiped out or dragged off except for him and his sister Caroline (Carole Androsky). They are rescued by the Cheyenne and Caroline escapes. Jack is raised by the tribe, specifically by Old Lodge Skins (Chief Dan George), who christens him Little Big Man. The two separate and find each other again for the rest of the film. They split the first time when he is 16 and is attacked by the U.S. Cavalry. He reveals his actual race and is thus “rescued” and turned over to a white couple to be raised. The relevant person here is Mrs. Pendrake (Faye Dunaway), who is obviously attracted to the young man. He leaves, mostly because he can’t reconcile her talking about piety while attempting to seduce him.

He turns to selling snake oil with Mr. Merriweather (Martin Balsam) and the two are eventually run out of town after being tarred and feathered. But one of those running them out of town is Caroline, and suddenly Jack is back with his sister, who teaches him to be a gunslinger. But he’s also scared of killing anyone, and when he meets Wild Bill Hickock (Jeff Corey), he gives it up and is deserted by his sister. He tries running a store with a new wife (Kelly Jean Peters) but goes bankrupt and then heads west. They are attacked by natives and his wife is taken, and once again, he finds himself back with Old Lodge Skins.

And so it goes. He eventually finds Olga, who is now married to his Cheyenne rival and is terribly henpecked. He finds a new Cheyenne wife, who also forces him to marry her three sisters. But then much of the tribe is wiped out by Custer’s 7th Cavalry (Custer is played by Richard Mulligan, and he continually crosses paths with Crabb/Little Big Man). Over and over again, he runs into the same people and then parts from them. Eventually, he gets his revenge on Custer by essentially forcing him into the battle at Little Big Horn, but none of it seems worth it to him at the end.

This is a strange film in a number of respects. There isn’t a particular plot here—we aren’t really going anywhere in particular except eventually to Little Big Horn. There is, I think, a message here, but this is more or less a character student of Crabb/Little Big Man. And while it is essentially the story of his life and a study of him as a person, there is a great deal of evidence that most of it is entirely made up and is nothing more than an increasingly ridiculous fable created by Crabb for a gullible audience. A great deal of this is because of the coincidences that would make Dickens blush. After a number of years, Crabb runs into Wild Bill Hickock again, and is there when Hickock dies. His dying wish is for Crabb to pay off a prostitute…who just happens to be Mrs. Pendrake. It really gets sort of silly.

And so, while the story is important in the sense that it’s what we’re watching, the film lives and dies on the performances. Dustin Hoffman is good. He’s not exceptional, but he’s good here. Chief Dan George, though, steals the film from everyone else. Most of the white characters are caricatures, and act as caricatures, and I think that’s intentional. We’re supposed to have our loyalties and sympathies with the natives here.

It also has a real issue with tone. A number of sequences in the film are very funny, but the film turns very dark in the last half hour. It’s difficult to mentally switch gears from a very entertaining sequence in which Little Big Man is forced to satisfy his three sisters-in-law sexually followed by a massacre. It’s difficult to know where to stand on what is going on because it moves from humor to tragedy suddenly and without warning. I realize that’s realistic, but I’m watching a film—I don’t specifically want realism.

Ultimately, it was sort of a “meh.” I don’t see a reason to watch it again.

Why to watch Little Big Man: The story is frequently a lot of fun.
Why not to watch: It’s also frequently depressing.
Posted by SJHoneywell at 11:32 PM