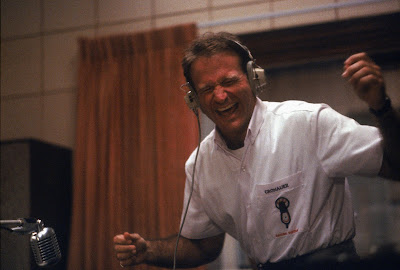 When looking at a film like Good Morning, Vietnam, you have a few options. You can assume that Hollywood played with it a little, but that it’s basically accurate. You’d be wrong to do that, but you could do it. You could also get really bent out of shape that there’s little similarity to the Adrian Cronauer depicted in the film and the real guy—a life-long Republican who worked within the guidelines of military edicts for his entire career. Or, and this is recommended, you can forget about historical accuracy and look at this simply as a movie and judge it on that basis. That’s the best idea because there’s nothing in this film that complies with history.

Adrian Cronauer (Robin Williams) is brought to Vietnam to help build the morale of the troops as a radio performer. He’s been called in from Crete mainly because he’s very good at what he does; he’s funny and the troops seem to like his brand of humor and his taste in music. He’s greeted at the airport by Edward Montesque Garlick (Forest Whitaker), who is a bit of a nerd and worried about getting into trouble, but also sees problems in the army around him. We’re also quickly introduced to Marty Lee Dreiwitz (Robert Wuhl), who thinks he’s funny and isn’t (a statement true of both the character and of Robert Wuhl himself). On the “bad guys” side, we have Lieutenant Steve Hauk (Bruno Kirby) who is supremely unfunny and a martinet and Sergeant Major Dickerson (J.T. Walsh) who has a massive stick up his back porch. These two take an immediate dislike to Cronauer and do everything they can to keep him off the air, morale be damned.

Cronauer is immediately fascinated by Vietnamese women, and focuses on one in particular, who refuses to talk to him. As a method of getting to know her, he takes over her English language class and, as a precursor to getting the girl, meets up with her brother, Tuan (Tung Thanh Tran). Tuan doesn’t trust Cronauer, but over time learns to, and eventually arranges a meeting between the American and his sister, Trinh (Chintara Sukapatana).

Much of the time is spent in Jimmy Wah’s, a local bar/restaurant run by the eponymous owner (Cu Ba Nguyen), who is flamingly and overtly gay and has a fetish for Walter Brennan. As the film progresses, the relationship between Cronauer and Tuan takes a darker turn. Tuan, for instance, pulls Cronauer out of Jimmy Wah’s moments before the place explodes, and Tuan also seems to be able to move through Viet Cong territory with relative ease.

The film essentially becomes a battle between the disc jockeys—Cronauer in particular but also the other working stiffs in the unit—and those more dedicated to living by the book. This includes Hauk and Dickerson mainly, but also includes the Army censors (Dan and Don Stanton who look so much alike that it almost seems like a camera trick instead of identical twins). Cronauer clashes with the brass on a near-daily basis, which leads to his being pulled from the air and replaced by the supremely, dreadfully unfunny Hauk in one of the film’s best moments.

Good Morning, Vietnam isn’t quite sure of what it wants to be. Is it a comedy about dealing with the brass and people without a sense of humor? Yes, it is in part, and these sequences tend to be the strongest in the film. Is it a drama about relationships, racism, and nationalism? Yes, it’s that too, especially as we delve into the relationship between Cronauer and Tuan and Cronauer and Trinh. Is it about inefficiency and stubbornness, and playing things too close to the book instead of living? Yes to that as well. Because it is all of these things, it’s also none of these things completely, and as much as the film tries desperately to gel into a unified, complete story, it never really does.

It’s still a strong performance from Williams. The best scenes in the movie are those in which he is able to improvise and work with a very loose script and material he’s been given as a starting point. His radio rants are staggering and manic, offering glimpses of comedic genius, improvisational skill, and excellent timing. Similarly, his immediate responses to jabs from his superiors are funny and delivered perfectly. It’s elsewhere the film seems to break down. Williams can certainly pull off relationships in film, but here, it doesn’t seem to work as well as the straight comedy does.

Good Morning, Vietnam also seems to mark a slow slide into sentimentality for Williams, comedic films that seem to have a moral message that never quite pans out or that comes out not as heartwarming and real but as sap and cheese. It was a long, slow slide through films like Dead Poets Society, Awakenings, Hook, Toys, and Jack, finally culminating in the diabetes-inducing Patch Adams that marked a frequently unfunny, unentertaining slide in the man’s career. That he’s broken out of this in the main is a good thing. And while his performance here is a strong one, there’s no mistaking that his dozen-year, face-first slide into sappy sentimentality started here.

Watch the movie for him, for Forest Whitaker, and for Bruno Kirby. Williams is at his comedic best here, at least in the moments he is allowed to be funny. When the relationships shows up, fast forward, or go make yourself a sandwich.

Why to watch Good Morning, Vietnam: When over-the-top Robin Williams works, it really works.
Why not to watch: History is tossed out the window for dubious dramatic effect.
Posted by SJHoneywell at 9:50 PM