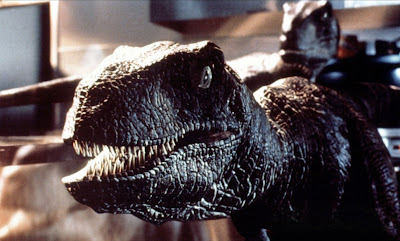 I’d love to say that in 1993 when Jurassic Park came out I was a kid. Sadly, that’s not true. In 1993, I celebrated my second wedding anniversary. I wasn’t a kid. That didn’t make too much of a difference, though—I still really wanted to see giant, realistic dinosaurs on a giant screen. And so I went. You better believe I went and saw Jurassic Park during its initial run in theaters. I won’t kid you, here. Seeing giant friggin’ dinosaurs doing what they have always done in movies but looking like I imagined they’d really look was awfully damn cool.

I’m going to work on the assumption that you’ve seen this movie but may not have seen it lately. So here’s the quick and dirty. A rich guy named John Hammond (Richard Attenborough) has a cool idea. He sends out teams to find ancient, prehistoric mosquitoes trapped in fossilized amber. From them, the blood of their last meal is extracted, and since we are talking about prehistoric insects, we’re talking about dinosaurs. The DNA is then extracted from the blood, and using frog DNA to cover any gaps, real, living dinosaurs are created, with the goal being a huge zoo/amusement park called, well, Jurassic Park.

So, Hammond brings in some experts from a dig he is financing, specifically paleontologist Dr. Alan Grant (Sam Neill) and paleobotonist Dr. Ellie Sattler (Laura Dern) as well as chaos-loving mathematician Dr. Ian Malcolm (Jeff Goldblum). He also brings his grandchildren Tim (Joseph Mazzello) and Lex (Ariana Richards). And, of course, all hell breaks loose. What fun would it be if it didn’t?

The hell breaking loose comes from the actions of park systems designer and programmer Dennis Nedry (Wayne Knight), who has some unidentified money problems. He is being offered a significant amount of money to bring out some dinosaur embryos to a rival company. When he attempts this, he shuts down most of the safety systems in the park. This means that the dinosaurs—particularly the Tyrannosaurus Rex and the velociraptors are free to move about and threaten the people. And, while running from the dinos, the scientists discover that despite all of the precautions, the dinosaurs have started mating.

The film, as is typical for Spielberg, sports a fantastic cast of players. In addition to those mentioned above, we get Samuel L. Jackson pre-BAMF as one of the main security experts in the park and Bob Peck as Muldoon, the big game hunter who works in the park to keep the dinosaurs in line. I had forgotten (or more likely never knew) that B.D. Wong shows up here for a cup of coffee as a scientist, too.

Despite the cast, Jurassic Park is essentially a big-budget B-movie. Man makes dinosaurs, dinosaurs escape, man runs from dinosaurs. The sell here isn’t the inspiring or terrific plot, but the dinosaurs themselves, looking more realistic than anyone had ever seen before on the big screen. Now, almost 20 years later (and yes, that’s hard for me to believe), they still look great. This is a film to watch on a large screen, HD if you can get it, and really experience the dinosaurs the way they were intended. The acting is good overall, but this is a film that sells itself from start to finish on the special effects and the overall look.

Jurassic Park does suffer from one of Spielberg’s frequent tropes. Our two paleoscientists, particularly Dr. Grant, has a hypothesis about dinosaurs. It’s his belief (one that actually is gaining credence these days) that dinosaurs didn’t so much evolve into reptiles, but into birds. Because Dr. Grant is a good guy in this film and is trying to save the two kids lost in the park, his hypothesis proves correct. This became a much larger problem in the sequel to this film, but it still exists here. People who we want to root for are always right in anything they think and try. They don’t make mistakes or have incorrect hypotheses.

But it doesn’t really matter. Jurassic Park is fun and scary. This is the movie that introduced those of us who aren’t paleontologists to the terror that are velociraptors. It’s also the film that made dinosaurs cool for the masses again. And they are cool.

Jurassic Park, as I’ve said, is all about the special effects. It helps that it really seems like the science would work, too. I have no idea if it is possible to create dinosaurs in the way described here, but for the layman like me, it sounds official and like it would work. I respect the hell out of it for that—it works on science and not magic, even if the science isn’t totally realistic.

So is it good? Yeah, it is. It’s fun and scary and exciting, and it’s not really meant to be anything more than that. Watch it on the biggest screen you have available, and if it’s been awhile since you’ve seen it, remember how much damn fun this movie really is.

Why to watch Jurassic Park: Giant realistic dinosaurs.
Why not to watch: It follows the Spielberg morality rule, although the sequel is far worse.
Posted by SJHoneywell at 1:57 PM