Tales of the New West 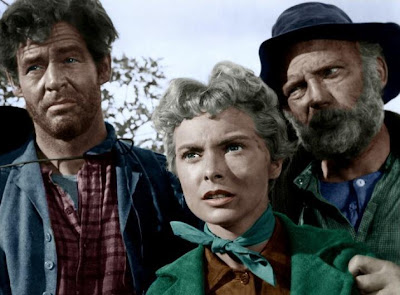 The Western is a genre I still find something of a mystery. It’s a genre that perhaps more than any other has evolved over time. Aside from the setting, there is very little to connect a classic Western from the ‘40s (say, Destry Rides Again) to those of the modern era (The Assassination of Jesse James by the Coward Robert Ford). Early Westerns tend to be idealized in many respects, particularly in the characters. Winchester ‘73 changed all of that. The Naked Spur picked up a few years later right where the first film left off.

In fact, the ‘50s were something of a landmark decade for Westerns that didn’t fit the traditional mold. The Naked Spur fits in with this idea as well as any other. Saying that it follows in the footsteps of Winchester ‘73 is not just saying that—Anthony Mann directed both, and James Stewart stars in both, making this film the natural son of the other.

As with a lot of Westerns, the plot is pretty straightforward, with the only real twists and turns coming from the fact that the genre was starting to change. This big change is the idea that heroes aren’t specifically heroic in all things, that they are real people who aren’t completely idealistic or morally perfect. Howard Kemp (Stewart) is a man on a mission; he’s looking for an outlaw named Ben Vandergroat (Robert Ryan), wanted for crimes committed in Kansas. Before meeting Vandergroat, he encounters a couple of other people who will be important in the plot.

First is an unlucky prospector named Jesse Tate (Millard Mitchell, who was also prominent in Winchester ‘73. Howard hires the prospector for $20 with an eye toward catching his fugitive. Jesse immediately assumes that his new riding partner is a lawman, and Howard does nothing to change this idea. The pair then come across Lieutenant Roy Anderson (Ralph Meeker), recently discharged from army for being morally unfit. The reason, implied with force, is that he carried on with the daughter of a native chief.

Not too long after this meeting, the trio meets up with their quarry and discover that he’s not traveling alone—he’s riding with Lina Patch (Janet Leigh), the daughter of his former partner. Lina is convinced of Ben’s innocence. It’s also at this time that we discover a few important things. Howard Kemp isn’t a lawman; he’s just someone looking for the substantial bounty on Ben Vandergroat.

We discover more as we go on. We learn, for instance, that Roy is running east because he is being pursued by members of the native tribe. When the tribe catches up, he sets up an ambush during which the natives are killed; during the fracas, Howard is shot in the leg. It’s here that we learn the truth of his story—he went to fight for the Union in the Civil War, and deeded his ranch to his fiancée while he was gone. During that time, she sold the ranch out from under him and ran off with another man. We also see some of the intense anger in Howard as he pistol whips a native to death when his gun runs dry.

Really, the five main characters already mentioned are the ones who carry the whole film, and there’s not much need for any others. The film becomes a mental game between the four men in particular. Ben tries to play the three off each other, telling each that if there were fewer bringing him back, each share of the reward would be greater. In particular, he works on Roy and Jesse, telling them that Howard can’t buy back his ranch without the complete reward. Through all of this, Ryan plays Ben as a man in the middle of a joke he’s very much enjoying. Any dissention in the group causes him the greatest pleasure. He knows he’s headed for a rope, a short drop, and a sudden stop, but he’s still plainly convinced he can get out of it one way or another.

Stewart carries the picture, of course. It is he that we are essentially forced into sympathizing with. His sudden bursts of anger and his frustration serve not to make him less of a hero, but more realistic and believable as a character. He’s not so perfect that we are forced to root for him (and in many ways, Jesse is a more entertaining character), but he is a character who is completely believable. Just as worth watching here is Robert Ryan, who is joyfully malevolent and vicious. There’s a sadistic pleasure in him that is surprisingly entertaining to watch.

If I have a complaint, it’s that at least some of the conclusion is foregone as soon as we are introduced to all of the characters. This isn’t to say that there aren’t a few surprises, particularly at the end, but it’s hardly a spoiler to suggest that Lina will end up falling for Howard and vice versa. That is, after all, how the genre goes, even in cases that attempt to break the mold.

Having grown up with James Stewart in films like It’s a Wonderful Life, Harvey, and Vertigo, it always surprises me just a little when I see him in the lead role of a Western. I don’t know why this is, because he’s always worth watching in the genre, no less here than anywhere else.

Why to watch The Naked Spur: The continual refinement of the Western genre.
Why not to watch: It’s still a bit formulaic in places, although less so than you might think.
Posted by SJHoneywell at 9:46 PM