(This review is a part of the Blind Spots series. See others in the series for January at The Matinee.)

World War II is a common theme for films, and when it comes to World War II, the most common theme is to investigate aspects of The Holocaust. There are almost certainly more films on The List about this particular terrible part of humanity that any other topic with the possible exception of love and romance, and even then I’m not sure I’d take the bet. Because this is such a common topic for film, it becomes increasingly important for filmmakers to tell different stories rather than the standard tale of survival against crippling odds and horrifying brutality and inhumanity. And yet, in the long run, this is what most of the stories become—triumphs of simple humanity against a truly loathsome evil. 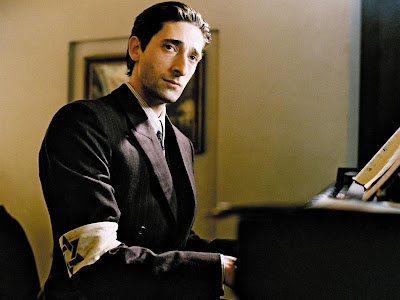 The Pianist is one such story that manages to transcend the idea of a tale about simple survival while essentially being a film about just that. Wladyslaw Szpilman (Adrien Brody) is a classically trained pianist who plays for Polish radio. On September 1, 1939, German troops cross the border into Poland, and both France and England declare war on Poland’s side. The Poles are convinced that the war will be won quickly and decisively, thanks to their allies coming to their aid.

Of course, this is not the case, and soon Poland is in the same grip of fear that plagues the rest of Europe. For Szpilman and his family, there is greater cause for alarm—they are Jewish, and the laws against them soon become restrictive. As Germany takes over, there are fewer and fewer rights available to the Jews and life becomes harder and harder. As the takeover progresses, so do the increasingly harsh laws, and as these go into effect, the behavior of the occupying forces become more and more openly sadistic. Eventually, the Jews are moved into a walled ghetto, a city within the city of Warsaw.

We follow Szpilman as he attempts to survive in the ghetto, tries to maintain a life with his family, and as he learns that there really is very little help from the outside world. A few friends do assist him, managing to get him out of the ghetto shortly before the uprising. He is moved into an allegedly abandoned apartment right across from the ghetto, which gives him a bard’s-eye view of the battles that go on there as well as the complete destruction of everything inside the walls.

Food becomes scarce, forcing him to go “prospecting” in other apartments with the hope of finding anything to eat. He is eventually found in a hiding place by a German officer named Wilm Hosenfeld (Thomas Kretschmann), who allows him to survive and even brings him food and clothing before the tide of the war turns in favor of the Allied forces.

The story is based on the real-life experience of the real Wladyslaw Szpilman, which makes touches like this one easier to believe. I have no idea how much, if any, of the film was based on the real story and how much was tweaked to better fit a particular narrative. But knowing that there is some basis in fact on the events depicted does lend a certain air of authenticity to the story.

Adrien Brody is perhaps the perfect person to play this role. He has an unusually expressive face, and his natural gauntness makes him ideal as Szpilman begins to starve. He looks like a man who is starving already. Put him in clothing a few sizes too big, and it looks as if he hasn’t eaten in a week. Toward the end of the film, with a full beard grown in, he looks positively decrepit. The beard doesn’t fill out is face but instead enhances the appearance of emaciation.

What’s interesting here is the starkness of the environment. Forced to move from location to location, Szpilman regularly encounters areas of Warsaw that have become blasted landscapes on which he appears to be the only living thing. We witness depraved acts of inhumanity that are shocking at the start of the film and become simply a part of the environment by the end. It is this that makes Hosenfeld’s behavior so noteworthy and, in its own way, beautiful. He asks Szpilman to play, and sits enraptured by the man’s talent, and then acts to save him. It is as if saving this one thing of beauty—a man’s talent—is a way to repay for the complete destruction of a people, a culture, a society, and a country.

I have a tendency to like or love Polanski’s films. I like this one. Perhaps on a second, future viewing I will love it.

Why to watch The Pianist: It’s a World War II story that is very different from the standard.
Why not to watch: How much time do you want to spend in the Warsaw Ghetto?
Posted by SJHoneywell at 12:00 AM