Most films about World War I are not American films. That’s simply a fact. I think it’s because the U.S. was involved in World War I for only about a year or 18 months before it ended, while all of Europe (virtually) was embroiled in that conflict for years before we got there. For the Americans, it’s still an important war, but one in which our involvement essentially pushed one side over the other. Had we joined the battle in 1915, our perspective on the war might well be different. 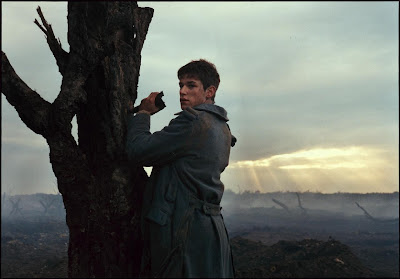 Un Long Dimanche de Fiancailles (A Very Long Engagement) is, then, a French film concerning World War I and the aftermath in the life of several people around France. We deal with terribly cruel punishments of men who desire to escape life on the front and the pursuit of these men after the war by their loved ones, who cannot determine if they are alive or dead. In particular, we follow Mathilde (Audrey Tautou) and her pursuit of Manech (Gaspard Ulliel), who she believes to be still alive despite all evidence to the contrary.

As the film progresses, we get pieces of insight into what happened on the front. The five men were convicted of self-mutilation (four are actually guilty), a court-martial offense and tantamount to treason. Rather than simply lining the men up against a wall and shooting them, there is a much more horrifying and terrible punishment in mind. The five men are taken out into the no-man’s land between the French and German lines at a place called Bingo Crepuscule. They are left there with no food and no weapons or ammunition, with the assumption that they will be killed during one bombing or attack or another. Manech, of course, is one of the five.

Mathilde feels such a strong connection with Manech, though, that she is convinced that he cannot be dead. She begins to investigate what happened at Bingo Crepuscule. She starts finding out people who were there who survived the battles. Bit by bit and piece by piece she begins to discover what happened, creating a narrative of those days with the men standing out in no-man’s land as well as the days that followed. She is assisted on her journey by private detective Germain Pire (Ticky Holgado) and survivor Celestin Poux (Albert Dupontel), who met the men and took care of them before their sentence.

She also discovers several of the women who have waited in vain for their men to return. Elodie Gordes (Jodie Foster, who speaks pretty good French) who lost both her husband in later days and her lover at Bingo Crepuscule. She also find Tina Lombardi (Marion Cotillard), a prostitute whose man was killed at Bingo, which leads her on a vendetta to kill those who sentenced him to death. Through all of this, Mathilde is supported by her aunt Benedicte (Chantal Neuwirth) and uncle Sylvain (Jeunet regular Dominique Pinon).

Un Long Dimanche de Fiancailles has all of the feelings of a typical Jeunet film with small touches of magical realism, which seems to be Jeunet’s favorite place to be. It does not have the same visual touches that a film like Amelie does, but these aspects are present in the script. Mathilde, for instance, has a series of superstitious tics that appear throughout the film as she attempts to reassure herself that Manech is still alive. She will, for instance, tell herself that if she can do something in a certain time or a certain way successfully, Manech will still be fine, almost like a child attempting to walk home from school without stepping on a sidewalk crack. And her mood and the path of the investigation seems to follow her success or failure on these little superstitious touchstones.

This is a hard film to dislike. Jeunet is one of the most expressive directors currently working. His films are visually gorgeous, and this one is no different. Even without the story going on, Un Long Dimanche de Fiancailles is beautifully filmed with gorgeous landscapes almost caressed by the camera. The war scenes have a stark beauty to them, as terrible and violent as many of them are. And this is Jeunet’s genius from my perspective. Even his war scenes—several of which are truly terrible to behold—are still riveting and demand being viewed.

Of course, other Jeunet trademarks are here as well. He has a passion for damaged characters. In this case, Mathilde’s frequent lapses into fantasy (if I can peel this apple without breaking the peel, Manech is still alive) are only part of her story; stricken by polio at five, she walks with difficulty, frequently using her evident physical limitations to elicit sympathy from others.

But is it good? It is. It’s perhaps too much to take in at times, and more complex than it needs to be. The story is lovely, though, and contains a marvelous ending that is both joyous and tragic, and therefore virtually perfect for a film dealing with the tragedy and terror of war.

Why to watch Un Long Dimanche de Fiancailles: Jeunet is a director worth watching.
Why not to watch: It’s not always easy to follow.
Posted by SJHoneywell at 11:23 PM