What Ever Happened to Paul Muni?

Films: I am a Fugitive from a Chain Gang; The Life of Emile Zola
Format: DVDs from personal collection on big ol' television.

How come no one seems to remember Paul Muni? For a time, he was one of the most lauded actors in the world. He was apparently born to play the lead in biopics, and a quick skim over his profile on IMDB shows that this seems to be where he made his bread and butter. Muni appears in several films on the Big List, and I’ve spent the better part of a day with the man. 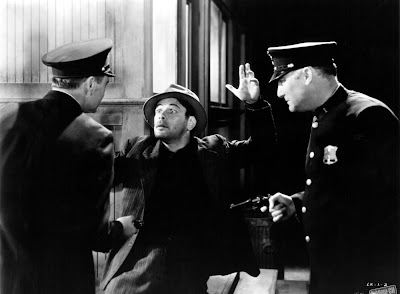 I am a Fugitive from a Chain Gang has the lurid title of a film of a few decades in the future. It tells the somewhat true story of an escaped convict who broke away from a chain gang crew and lived as a fugitive. Certainly there are a number of whitewashed aspects of this story from the original, but this version served to expose the chain gang system and create a desire for prison reform.

Our hero is James Allen (Muni), freshly returned from World War I. He’s given his old job in a factory, but it’s not anything he’s interested in any more. Instead, after working with the Army Corps of Engineers, he has a desire to build things. Sadly, there’s no work to be had, and Allen eventually ends up on the road, living hand-to-mouth.

At one stop, another down on his luck drifter convinces Allen to go with him to a local greasy spoon to bum a couple of hamburgers off the owner. The owner, after a little pleading, agrees. But this is more than just a quick attempt at a bite to eat. Our drifter pulls a gun and forces Allen to steal the money. Killed by the police in an ensuing shootout, the drifter leaves Allen to take the rap, and take it he does—ten years of hard labor. It’s not too long before Allen desires to go on the lam, and with the assistance of another prisoner named Bomber (Edward Ellis), he makes a break for it.

Eventually, he lands in Chicago and gets a job on a construction crew. His hard work and good ideas see him rise in the ranks. As he does, he becomes more and more attractive to Marie (Glenda Farrell), his landlady. She discovers his chain gang past and holds it over him, forcing him into a marriage that is perfectly beneficial for her. She spends more than he makes and runs around with other men while she keeps him on a tight leash. This gets even more confining when he meets Helen (Helen Vinson), with whom he falls in love.

Eventually caught, Allen is told that if he returns to the unnamed state of his escape, he’ll be given a pardon after 90 days. But it’s all smoke and mirrors—he’s put back into the chain gang and left, his pardon unfulfilled and the case closed. And so he escapes again, and goes on the road, living in shadows and in fear.

This film is naturally melodramatic, and it plays for pathos rather than tragedy. James Allen is not so much tragic as pitiable. His only crime, (other than escaping from the chain gang), was to give up a stable but boring job. Everyone, it seems, is complicit in the miscarriage of justice that causes him to be condemned to a life on the gang despite the overwhelming evidence in his favor. This, more than anything, is the reason for my accusation of wart removal in this film.

And yet, it’s a pretty good film. Muni is quite effective throughout the film. He suffers well, at the very least. The rest of the cast in general (with the exception of Ellis as Bomber) is subject to fits of extreme overacting and over piety. Regardless of this, the injustice done to Allen strikes a chord, as do the constant and consistent cover-ups of the brutality of the chain gang system in the South. For what it’s worth, the film set the standard and tone for chain gang films to come like The Defiant Ones and Cool Hand Luke. And regardless of the melodrama, the actual story is pretty effecting. 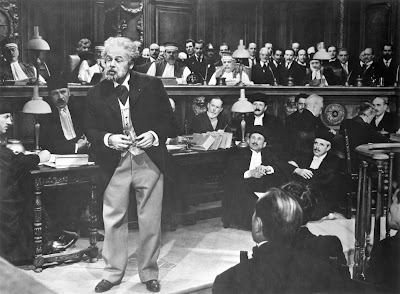 One of Muni’s triumph as an actor, though, comes in The Life of Emile Zola, a film, like Chain Gang for which he was nominated for an Oscar. In this film, we see initially a few snapshots of the early days of Zola (Muni), living in a cold flat in Paris with artist Paul Cezanne (Vladimir Sokoloff). The two suffer for their art, when suddenly Zola is given a job at a book publisher. He goes, but suffers again, this time because he begins to publish articles that call into question a number of facets of French life and society. Dismissed from his job, he returns to poverty, this time dragging along his wife Alexandrine (Gloria Holden).

During this time, however, he meets Nana (Erin O’Brien-Moore), a prostitute. She tells him her story, which he publishes as the book Nana. The book becomes an instant hit, and suddenly everything Zola touches turns to gold. He is lauded throughout Paris and the world by everyone by Cezanne, who tells him that he has grown fat with his success.

At the same time, the French military discovers a traitor in its ranks passing information to the enemy. Captain Alfred Dreyfus (Joseph Schildkraut) is accused and immediately found guilty, stripped of rank, and sent to Devil’s Island. Meanwhile, the real traitor, Major Walsin-Esterhazy (Robert Barrat) is uncovered, but his crime is covered up to maintain the Army’s dignity over the Dreyfus affair. Eventually, Zola gets wind of this and, pricked by the conscience that Cezanne has left him, calls into question the entire affair, accusing the military and even the highest levels of government of conspiracy to keep an innocent man in prison and allow a guilty man to walk free.

Here’s the thing—much like Chain Gang, The Life of Emile Zola is melodramatic to the extreme. Historical events are compressed at the end for a more bittersweet and poignant ending so that the melodramatic feel can remain throughout. Because of this, the movie telegraphs many of its moves, particularly in the last dozen minutes or so. And yet it still works really effectively. This is still a film that has the power to move and to create a great deal of sympathy for the figure of Dreyfus as well as for Zola’s sudden return to firebrand status. The most telling moment is Zola's speech at the end of his own trial. Despite everything working against it--the age and melodramatic stance--it remains one of the great courtroom speeches in film history.

Additionally, the film does tend in many ways to follow the actual history of the events. In some ways, the real story is far more drawn out and difficult, so it would seem that many of the events were compressed for ease of storytelling as well as for melodramatic purposes. But no matter. The film manages to work very well as a courtroom drama, as the story of a man called to action once again, as the story of the man’s life, and, by the end, a story of vindication and triumph.

What’s particularly interesting is the lack of mention of Dreyfus’s ancestry. One of the main charges against the military tribunal that convicted him was very real and evidently legitimate accusations of anti-Semitism. This is completely glossed over in the film, more than likely because of the rising trend of anti-Semitic feelings throughout Europe in the late 1930s. There are mere hints here—Dreyfus is accused and condemned by his military superiors based strictly on his name, a slight nod to the reality of the reason he was convicted in the first place.

What’s also interesting here is the depth of the conspiracy. In many ways, there are echoes today in news coverage and political ideologues that resonate from this film. The Life of Emile Zola manages to expose the subtle workings of human nature and our ability to suddenly grasp onto exactly the wrong idea because our feelings have been stirred up by those paid to do exactly that. If for nothing else, the film is worth watching today because it reveals—as do many other, similar films—our failings as a people to truly understand the depths to which those in power will sink if such power is threatened.

Why to watch I am a Fugitive from a Chain Gang: It single-handedly caused a call for prison reform.
Why not to watch: Melodrama phasers are set to kill, not stun.

Why to watch The Life of Emile Zola: Melodrama that works almost in spite of itself.
Why not to watch: Yet another kick to the hoolies for the French military, as if they needed another one.
Posted by SJHoneywell at 11:05 PM