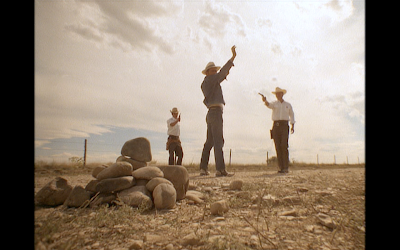 There has always been a certain level of fascination around serial killers for a certain type of person. In the U.S., there is a particular unique brand of such killers that populate the wide open spaces of the West. These killers seem to thrive in the emptiness where they can be alone except for when some unlucky soul comes across them. Such is the story of Badlands.

Kit (Martin Sheen), a garbage man, takes an immediate liking to Holly (Sissy Spacek) when he sees her. The fact that there is 10 years separating them and that Holly is a mere 15 doesn’t seem to dissuade him at all. When he loses his job, he takes up as a ranch hand, and he and Holly see each other in secret, mostly because Holly’s father (Warren Oates) doesn’t approve of Kit. This may be his daughter’s age, the age difference, or the fact that Kit looks a bit like a greaser and a bit like James Dean. When he discovers their times together, he punishes Holly by shooting her dog.

The two resolve to be together anyway. Kit attempts the pacifist path first, telling Holly’s father that he plans to be with her. But Kit is run off again, and the two decide to leave town. While he is collecting Holly’s things, her father enters, and there is a bit of a showdown. It’s one-sided, though, because Kit is armed, and he doesn’t hold back, shooting her father several times. He records a message that he and Holly have decided to kill themselves, collects Holly’s things, and sets the house on fire.

And suddenly, the film enters a sort of lull. The pair run off into the untamed woods of South Dakota and build a sort of treehouse for themselves, living together without any intrusion from the outside. At least, that is, until there suddenly is intrusion from the outside. Kit is forced to kill again, and the pair hit the road again, slowly working their way out of South Dakota by heading west. Kit kills again a few times, sometimes for no reason other than to do it, and Holly simply goes along for the ride, never participating in the killing, but also never preventing it or even saying anything to slow Kit down.

Of course, a ride like this one eventually has to end, and this one does, too. And the police and state troopers find what we have slowly come to learn over the course of the film—there is a sense of magnetism in Kit. He is a conscienceless killer, but is almost likeable in a way. Through all of this, Holly becomes more and more distant, retreating into her own sparse mental world, about as unpopulated as the west the pair drive through.

Despite this, Holly’s musings are fascinating. Rather than focusing on the killings and the death, she instead focuses on her own feelings and her own reactions to everything that is going on around her. At one point, near the time when the two part, she has retreated inside herself completely, ignoring everything Kit does. She tells us that rather than talk, she spells out entire sentences on the roof of her mouth with her tongue so that the sentences will never be heard by anyone. Comments like this one have a strange, subtle beauty to them. There is a sense of poetry as well as a sense of loss in them that seems to fit the expansive wastes of the setting.

What’s interesting to me here is that director Terrence Malick seems not to care overly much about the violence that is happening in his own film. The various killings of Kit Carruthers are treated with no more ceremony or slow-motion footage or glorified camera angles than any other event in the film. Potential victims left alive are treated no different from those who Kit guns down in cold blood and for no reason. There is, within the confines of this film, essentially no moral difference between killing and not killing. In fact, Holly’s reactions to all of the violence around her, even the murder of her own father, is a sort of vague, passive indifference. Both characters appear to exist in a world of solipsism, where the death of another is important only in how it might affect the self.

Malick’s photography is as sparse as the landscape and as devoid of emotion as Holly’s narrations. It’s effective throughout. There is a sense of simply events happening on the screen with no implied moral judgment one way or another. The events unfold, each filmed with the same distance as the last, and we are given no cues as to how we should react. In effect, Malick lets us decide for ourselves.

Badlands is an almost contemplative film despite its lurid subject matter. It avoids attempting to shock the audience with the violence of similar films (Straw Dogs from the same era comes to mind. So too does Natural Born Killers of some years later). Rather than focusing on the violence, the film instead focuses on Holly and to a lesser extent Kit and simply shows us their lives together.

An astonishing, difficult, and worthwhile film.

Why to watch Badlands: Malick before he got as Malick-y.
Why not to watch: Because you need the movies to make your moral judgments for you.
Posted by SJHoneywell at 5:51 PM