All children rebel against their parents in one way or another. It’s a part of growing up, I suppose. I rebelled in my own way, as did my siblings, as did my wife. I’m starting to see that here and there with my older daughter, and I’m sure of the knowledge that it will get worse. In the minds of those rebelling, there’s always a reason for doing so. And sometimes, those on the outside looking might well agree with that reason. 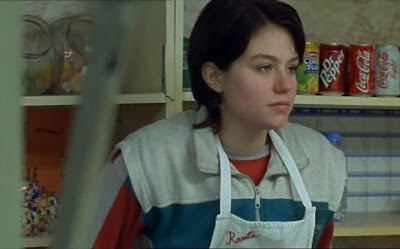 Rosetta is a film from the middle of the careers of Jean-Pierre and Luc Dardenne, who are evidently the Belgian equivalent of the Coens. It focuses on the life of Rosetta (Emilie Dequenne), a young woman who wants only to escape the life that she has. She lives with her mother (Anne Yernaux) in a trailer in almost complete poverty. Her mother, an alcoholic who has sex with the other trailer park residents in exchange for booze, is abusive and terrible. All Rosetta wants is to get away from this life any possible way she can.

Her first choice is by finding a job and saving up enough money to get away. But the film opens with her being let go from her factory job because her trial period is over. She sells clothing for extra money, and asks everyone she encounters if they have work for her. She’s so desperate that her reaction when thwarted from the simple goal of employment is violence. Her reaction upon losing the factory job is excessively violent (to the point where she couldn’t conceivably keep the job anyway). She fights physically and verbally with her mother, typically over the drinking and sex. She asks a guy named Riquet (Fabrizio Rongione) at a waffle stand for a job, and when he eventually follows her home, her first inclination is to knock him off his scooter.

As it turns out, he was coming to offer her a job, and despite her violent reaction to his arrival, she gets it. And as with her previous job, Rosetta essentially becomes the job. For her, the job is life because without it, she is left with nothing. There is no room in her life for anything but the job, earning any money she can, and the strange stomach pains she suffers from (never fully explained—possibly an ulcer). Despite Riquet’s obvious interest in her, she has no time for him. She is obsessive about money to the point of leaving lines in the local river to hook fish and doing laundry by hand in a plastic tub.

And that’s essentially the film here. Rosetta is brutal in the world it depicts and brutal in its depiction of that world. Most of the camera work is handheld and from mid-close and closer, providing an uncomfortable intimacy with this story. We aren’t able as the audience to get away from Rosetta, and in fact are rarely more than an arm’s length away from her. Her world becomes the only world we are able to experience in the film. This has the twin purposes of making the story simultaneously compelling and repellent.

In many ways, this is the entire point of the film. The Dardennes have built something here that is almost completely unique. They have created a character in Rosetta with whom it is impossible to have anything but the greatest sympathy, but who it is virtually impossible to like as a person. Rosetta is a product of her terrible, repressive environment and every minute of her life is a struggle to reach the next minute. This leaves her virtually no room for her own humanity or anything like kindness, pleasure, or simple enjoyment. She becomes not a person, but a thing that exists. Rosetta is unlikeable because of her environment and also fascinating because of it. She is predatory and feral, an animal always fearful of being caged or hurt, because everything she has encountered has done one or both of those. This also explains her “violence first” attitude toward everything that isn’t what she immediately needs. At one point, when Riquet falls into the river, she hesitates before saving him. After all, if he drowns, a spot will open up at the waffle stand. This makes her betrayal of him not merely terrible, but inevitable.

Rosetta’s inability to connect with anyone on a human level would be funny if it were not so painful. Invited in to Riquet’s home at one point, her lack of human feeling and connection becomes brutally evident. Riquet is clearly trying to impress her, but she is unable to notice, pay him a compliment, or, at one point, loosen up enough to dance with him. The need to escape her life is so dominant, that she can’t let it alone for a moment.

As with many films of this sort, Rosetta is difficult to watch and difficult to enjoy, but powerful and moving regardless. Our title character lives in a world in which she really has no wants because her needs are so pressing and deep-seated that she cannot get beyond them. On a podcast a few months ago, fellow blogger James Blake Ewing commented that the story of a character unable to change is a tragedy. Rosetta is one such character, and her story is a tragedy—not because she doesn’t change but because she wants nothing but change and can’t achieve it.

This is a difficult film to watch both because of its subject matter and because of the extreme intimacy of the camera, but it’s a worthy watch nonetheless.

Why to watch Rosetta: It’s what Fish Tank should have been.
Why not to watch: The camera offers no distance between audience and an unpleasant subject.
Posted by SJHoneywell at 7:17 PM