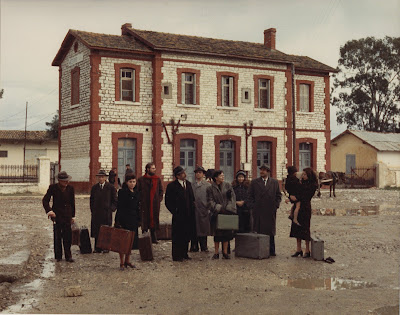 I’ve never really objected to long films. Some of my favorite film experiences from the past couple of years have been films of extreme length--The Lord of the Rings Trilogy, The Decalogue to name just a couple. What I don’t understand, though, is the evident idea that a film is somehow given more power and more weight and more importance simply because of its length. That is certainly the case with Theo Angelopoulos’s O Thiassos (Travelling Players).

Second, O Thiassos is a sort of history of Greece from before World War II, through the war, and into the post-war period of civil strife with the communists, and into the years of Anglo-American intervention. The film does not tell this history in a straight narrative. In fact, it frequently jumps back and forth and sometimes happily mashes two time periods together in the same shot. For instance, we may see German troops standing guard at an installation while a truck drives by, telling people to vote for the man who put down the communist rebels in the late 1940s.

Third, and perhaps most significantly in terms of film narrative and art, O Thiassos serves as a modern retelling of the Orestean cycle of classic Greek plays. Our major characters bear the same names as their classic counterparts, and in good retelling fashion appear to be completely unaware that they are the namesakes of a series of tragedies.

It would seem like that should be more than enough to fill a film of nearly four hours in length. In reality, though, it’s not nearly enough. This film is packed with long takes, frequently with the aftermath of what has just happened appearing on screen for half a minute before moving on. Allegedly, the entire film is made with a mere 80 shots, and based on the length of some scenes involving a static camera, I wouldn’t doubt the veracity of that claim. All of this serves to further slow down a film that is by all accounts dreadfully slow in pace. What this means is that, for instance, when the inevitable rape/interrogation scene happens (because you just knew there was going to be one), we see it at length.

Additionally, the film is very confusing. Part of this may well be the language barrier and the fact that while watching, I am forced to spend at least a part of the time reading the bottom of the screen. However, there are long sequences without speech of any kind, so there’s evidently some natural confusion in the narrative itself. I point to the blending of time periods as being the biggest culprit in this. In fact, I was confused for the first half hour or so of the film, thinking I had perhaps misread something. We see World War II-era German soldiers and hear about the Communist Party in 1949. It wasn’t until this happened a second time that I started to realize what was going on. In a way, it seems sort of unfair to create a film of this length and at this pace that requires a second viewing to truly understand. There are a couple of moments of fourth wall breaking during which a character will approach the camera and speak at length about their past and what has happened. These soliloquies do help, but they don’t quite go far enough.

And really, I don’t think I’ll give it a second viewing. O Thiassos is not a bad film by any stretch, but it is a film that requires a significant commitment to watch. As it is, I have watched it over the course of about a week, half an hour here, a little bit there, until a final marathon at the end to finish it up. That I call how I finished the film a marathon is not merely a pun on the film taking place in Greece. My final push was perhaps two-and-a-half hours give or take. It’s a length of time that wouldn’t phase me for most films, and I’ve watched much longer without a break and without complaint. But it felt like a marathon here, because the film simply never wanted to end.

I’m not sure where cuts should or could be made. It’s sort of in general overweight and bloated. Ultimately, I think I might rather read the Orestean plays again rather than sit through an overlong modernization a second time.

Why to watch O Thiassos: It gives a reason for the benefits of a classical education.
Why not to watch: It’s the length of two movies with the content of one.
Posted by SJHoneywell at 9:29 PM