Fear, Loathing, and a Pint of Bitters

Film: Withnail and I
Format: Streaming video from NetFlix on laptop. 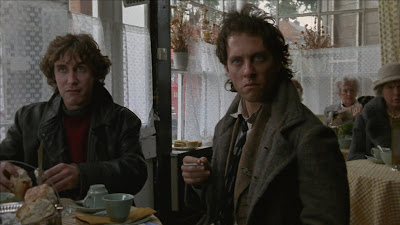 The traditional coming of age story happens when someone hits puberty, because that is the time that most of us go through a period of “growing up.” But what happens in cases of arrested development? What happens when we pass through puberty and emerge still a child, still supremely selfish, still mired in our own wants and desires, crippled by addictions and feelings that everyone else gets the things that we want? What happens is Bruce Robinson’s Withnail and I.

Our unnamed narrator (“Marwood” according to a telegram, and played by Paul McGann) lives in a dilapidated London flat with his friend Withnail (pronounced “Withnull” and played by Richard Grant). The apartment is reminiscent of the house on Paper Street that eventually houses Tyler Durden in Fight Club. There is garbage everywhere and the kitchen has become an area requiring a hazmat suit to enter. The narrator is perpetually disturbed, constantly irritated, and frequently paranoid. A struggling actor, he and Withnail live from government check to government check, drugging themselves, drinking, looking for theater auditions, and slowly freezing to death because they can’t afford heat.

Withnail, though comes from money, and he decides that he will hit up his flamboyantly gay uncle Monty (Richard Griffiths) for the opportunity to use his country cottage. And so the two young men head off for a weekend or so in the country, which turns out to be significantly different than they had hoped. In fact, they end up in essentially the same situation—no heat, no food, and now surrounded by country folk who are evidently not too pleased or willing to help a couple of dandies from the big city. Compound this with the arrival of Monty, who is convinced that the narrator is gay, and you end up with quite a weekend.

What shines through in this film more than anything else is that the overriding mental state of Withnail is one of selfishness and jealousy. Grant plays the part as if Withnail had had a privileged life until very recently. Withnail is rude and demanding, and stops at nothing to get what he wants. He breaks promises continually, lies to get his way, forces the blame for his mistakes and bad behavior onto other shoulders, and generally acts like a spoiled little child who wants a cookie.

How to explain Withnail? Imagine the Bill Murray character from Ghostbusters. Multiply his assholish behavior by ten, add booze, and remove most of the charm. Throw in a disproportionate sense of entitlement. Now you’ve got a start.

For as much as the film seems to focus on the narrator, his various paranoias and problems, and the intense relationships he has, a great deal of the focus is naturally on Withnail. In many ways, Withnail is the central character of the film despite the fact that he never really changes. Withnail is something like a mathematical constant. He is unwaveying in his desire to please himself at any cost. Because of this, because he is a pure constant in the film and serves as a terrific counterpointing to the narrator’s story.

So what we ultimately have here is a coming of age story for someone who should have come of ages years before. And while Withnail dominates much of the narrative, it is evident quickly that this is truly the narrator’s story. While he goes on auditions and has frequent contact with his agent, Withnail complains about auditions he doesn’t get and drinks anything he can find, including lighter fluid at one point. Withnail is consumed by jealousy, by arrogance, and by frustration that he can’t get everything he wants and that no one will recognize his particular genius. And thus he is in many ways like a typical kid going through puberty. He just never left.

This is an interesting film. McGann’s performance is frenetic and filled with paranoia and consuming fear. Grant, on the other hand, appears not to care about anything in the world, causing scenes and getting sloppily drunk at all hours of the day. This too is a fantastic performance.

I like the performances very much in general. I also love the scenery that served as a backdrop for the film. This film is unpleasant, but is so by design.

Why to watch Withnail and I: A very different coming of age story.
Why not to watch: Because you can smell the booze through the screen.
Posted by SJHoneywell at 12:01 AM

Email ThisBlogThis!Share to TwitterShare to FacebookShare to Pinterest
Labels: Bruce Robinson, comedy, Withnail and I