No Ticket, No Money 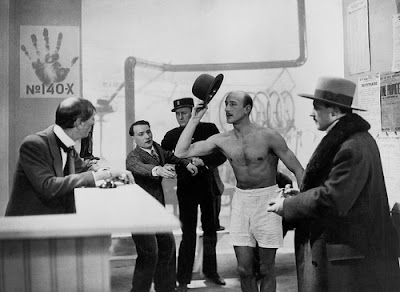 I’ve been trying to watch something from the earliest years at least once a week, a goal that I sometimes succeed at and sometimes simply do not. Films like Le Million (The Million) are the reason that I sometimes do not watch one of these early films and also the reason why I’m really happy to have most of the first 100 films done.

Anyway, Le Million is the story of Michel Bouflette (Rene Lefevre), a poor artist who is in debt to just about everyone he knows. Just as his creditors come to call on him and demand payment, his friend Prosper (Jean-Louis Allibert) shows up and tells him that one of them has just won one million florins in a lottery. Just before they determine who has the winning ticket, Michel offers a 50/50 split regardless, which Prosper declines. As it turns out, Michel has the ticket.

Unfortunately, the ticket is in his old coat, which is in the apartment of Beatrice (Annabella), his fiancé. What he doesn’t know is that Beatrice has given the coat away to a thief named Granpere Tulipe (Paul Ollivier). Naturally, the coat doesn’t stay with him, either. So what follows is a grand chase for the coat around Paris. The police are after Tulipe and think that Michel actually is Tulipe. Michel and Beatrice want the jacket back. Prosper wants Michel out of the way so that he can claim the ticket as his own. And, as the saying goes, hilarity ensues.

Except that it sort of doesn’t. The biggest problem with this film is the opening several minutes after the credits. We discover these characters whose story we will soon learn about in the middle of a celebration. We’re told that they are celebrating something wonderful that has happened and that everything has turned out perfectly. So there’s not a bit of tension in this story—we know from the beginning that whatever problems we are going to encounter on the way to the finish are going to come out fine in the end. Michel in jail? We know he won’t stay there. The jacket stolen? We know it will come back.

Okay, it could easily be argued that with musical comedy we know going in that it’s all going to come out right in the end anyway. But a good musical comedy will keep that tension ratcheted up and put us in a position in which we don’t know how we’ll get to a happy ending. Or it will play with the ending and give us the happy ending we didn’t know was there. Lots of possibilities even though we expect the happy ending. Here, not so much.

Additionally, the entire plot and the success of our characters depends entirely on luck, and in several cases, the sort of luck that would make a Charles Dickens character blush. Michel is difficult to root for not because he is poor, but because he is successful in everything he does purely by chance rather than skill, determination, or any other positive quality. Better lucky than good, I suppose, but this film takes that to a ridiculous extreme.

I suppose that the songs are decent, but they’re not really anything that special. I found it interesting that many times the songs were not being sung by the characters in the context of the film, but appear more or less as a given character’s thoughts or conscience. That, at the very least, was an interesting difference from what I expected.

As it turns out, though, there’s not a lot here to recommend. The film is guilty in a large respect of equating personal value with bank account. Michel is a bum until the moment he has a winning lottery ticket, where upon he becomes a man greatly respected and to be taken seriously. The fact that this is disturbingly true to life doesn’t change the fact that this opinion seems to be fully endorsed and encouraged by this film.

And finally, for a musical comedy, it’s remarkably unfunny. I barely cracked a smile.